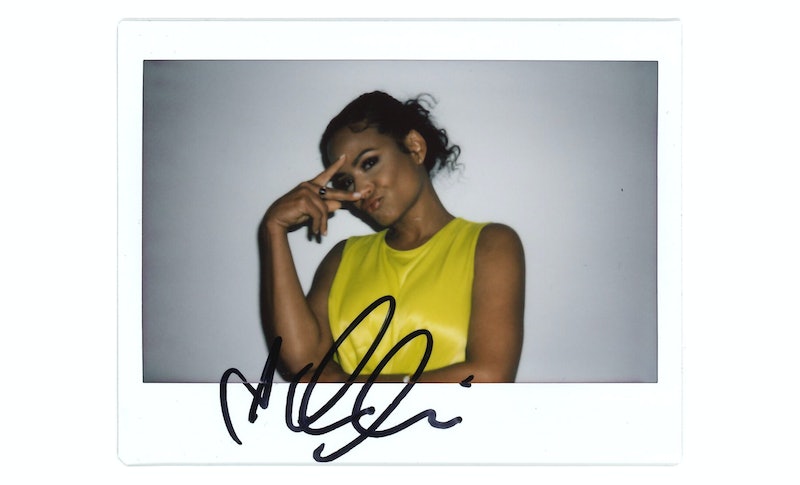 When celebrities hang out with Bustle editors, we want to give them the chance to leave their mark. Literally. So we hand them a pen, a piece of paper, a few questions, and ask them to get creative. The rest is up to them. This time, singer-actor Christina Milian is leaving her mark in the Bustle Booth.

Christina Milian is a true triple threat. Her Y2K R&B hits like “Dip It Low” and “AM To PM” soundtracked our childhoods, her TV characters range from a new mother on Grandfathered to a fierce cop on The Oath, and her dance skills, as seen on Dancing With the Stars, are on point, to say the least. But Milian has an idea that could push her in new creative directions: to write and produce the next installment of the iconic Bring It On franchise.

“I literally was thinking about it lately,” Milian says when I ask if she would star in another Bring It On film, chatting during her recent visit to Bustle. “I’m thinking like, what if I just write a new Bring It On movie? I think would be a really dope idea because they're all great.”

As fans will recall, the actor played Sky Lions cheerleading captain Catalina "Lina" Cruz in 2009's Bring It On: Fight to the Finish, the series' fifth installment. Yet although Milian wants to bring a sequel to life, she says she has no interest in playing a teen on-screen again, which is totally understandable considering how much of her career was spent catering to adolescent audiences. Back in the early 2000s, Milian appeared on Disney Channel's Movie Surfers; collaborated with Hilary Duff on the singer’s 2002 Christmas album Santa Claus Lane; and, most notably, became the voice behind the iconic Kim Possible theme song. That song, Milian says now, could have sounded very different than the tune that was probably your ringtone throughout elementary school, as she had an opportunity to co-write the lyrics but declined.

“I could have been a butthole and tried to change things, but it was perfect the way it was," Milian explains now. "It's just not in me to fake that I've written something, and it's not in me to make a mess of something just so that I can get some claim to fame for it. My claim to fame would be that I sing it.”

Milian’s Disney career could also have taken a different turn if she had accepted an offer to join the Mickey Mouse Club, alongside alum like Britney Spears, Christina Aguilera, and Ryan Gosling. “Some people succeeded off of that group and some people didn't, but when they did, they smashed it," she says. "Fortunately, I got to be amongst those people later on with *NSYNC and Britney, I toured with them."

It was those experiences that helped Milian transition from Disney star to R&B artist. A certain song helped as well: “Dip It Low”, the bouncy, irresistible bop that came out in 2004 and still shows up on today's party playlists.

“I was 21, tuning into my sexiness, kind of going from the Disney ‘AM to PM’ girl into like, ‘Hey, by the way, I am a grown-ass woman and I have hormones and I'm feeling myself’,” Milian remembers. And she has a theory on why “Dip It Low” sounds just as fresh today. “I’ve met people who said that they were 10 years old dipping it low and I'm like, OK, I don't know what that says about your parents, but maybe that's why it's still growing and it's still out there because now they're actually legal,” she says, laughing.

While she’s currently recording new music that's both R&B and pop, Milian has been focusing more on acting lately. She currently portrays badass police officer Christine Parks on Sony Crackle's The Oath, and the two women share the same motivation: family. “My dad raised me to be really tough and just be prepared for fights," says Milian, adding that similarly, Christine "needs to take care of her little sister, and so she's got a drive and she won't take no for an answer.”

Milian's own drive has lead her to many exciting places so far, with much more to come. Read on for her answers to the Bustle Booth.

More like this
On 'The Handmaid’s Tale,' Christine Ko Fights Back
By Gretchen Smail
The Spice Girls Just Dropped A Brand New Music Video
By Sam Ramsden
Kate Bush Revealed The Real Meaning Behind 'Running Up That Hill' Lyrics
By Darshita Goyal
'Grey's Anatomy's New Intern Got Advice From Dr. Bailey Herself
By Grace Wehniainen
Get Even More From Bustle — Sign Up For The Newsletter