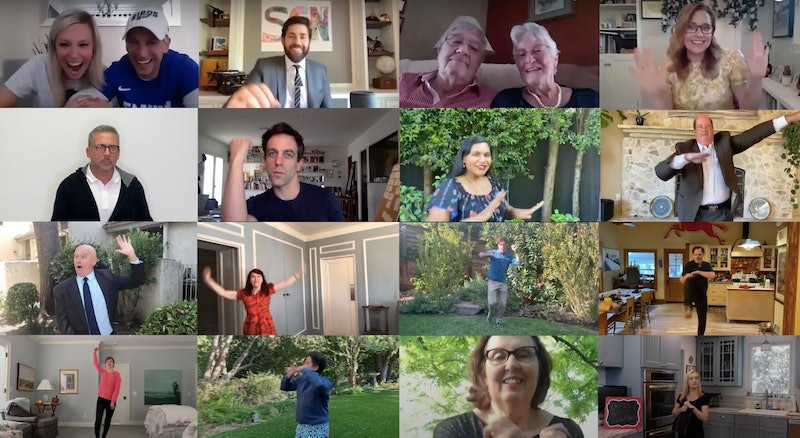 Since weddings aren't able to happen as normal amid the coronavirus pandemic, virtual ceremonies have become all the rage. But there's an unexpected upside to holding your nuptials online: the possibility of huge celebrities coming to your wedding! The Office cast reunited for a Zoom wedding on John Krasinski's virtual talk show Some Good News, and yes, they recreated an iconic moment from the show for one lucky, now-married couple.

It all started when Krasinski saw that Office super fan John popped the question to his now-fiancée Susan by taking a cue from the show and recreating Krasinski's character Jim Halpert's epic proposal to Pam Beesly (Jenna Fischer) at a gas station. According to Susan, John literally referenced the moment during what seemed like a normal gas station errand, telling her, "Just like Jim, I can't wait any longer" before getting down on one knee.

So of course, Krasinski just had to have the couple on his show. But rather than just talk to them via Zoom, the actor took it one step further and threw them a virtual wedding, complete with their parents and best friends signing on as a surprise. He even ordained himself so he could officiate the ceremony, and also declared himself best man. But the surprises didn't stop there, because Susan still needed a maid of honor. Enter: Jenna Fischer. That's when the Office cast reunion really got started.

On the show, the Dunder Mifflin staff put their own spin on the viral JK Wedding Entrance Dance at Jim and Pam's ceremony — much to the couple's disappointment. But the cast didn't disappoint for the second time around, with Krasinski cutting off his tie (again) for the occasion, and Wilson even kicking a woman in the face, just like Dwight did (this time, it was his wife Holiday Reinhorn).

This marked the second Office reunion on SGN, after Krasinski talked to Carell on the show's first episode back in March. And hopefully, it won't be the last one, especially when it becomes safe to gather in person. "I know everyone’s talking about a reunion," Kransinski said. "Hopefully one day, we just get to reunite as people and just all get to say hi." At least fans have this special reunion to keep themselves entertained until that happens.

More like this
'The Queen’s Gambit' Season 2 Tweet Wasn’t From Anya Taylor-Joy
By Mary Kate McGrath, Jack Irvin and Grace Wehniainen
This 'One Tree Hill' Wardrobe Error Is Going Viral On TikTok
By Brad Witter
Ashton Kutcher Wants Danny Masterson “To Be Found Innocent” In Rape Retrial
By Jake Viswanath
'Abbott Elementary' Fans Probably Missed This 'Parent Trap' Easter Egg
By Sam Ramsden
Get Even More From Bustle — Sign Up For The Newsletter
From hair trends to relationship advice, our daily newsletter has everything you need to sound like a person who’s on TikTok, even if you aren’t.