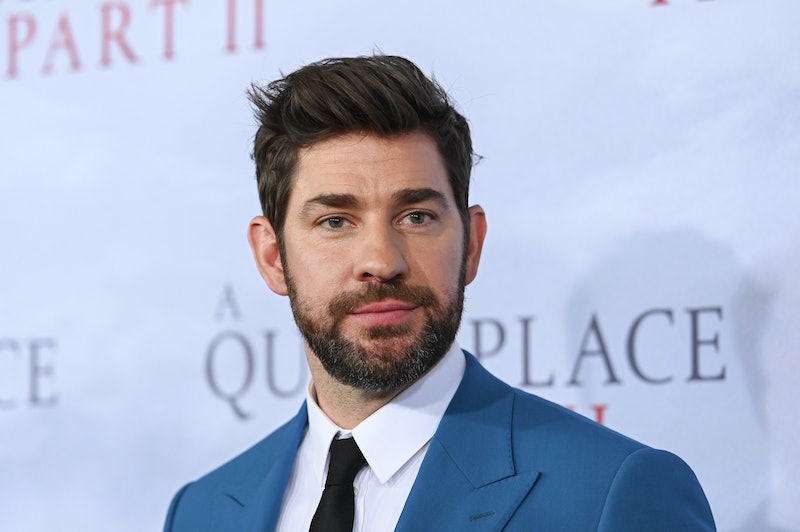 These Office stars are bringing Scranton, Pennsylvania straight to your home during social distancing. On Sunday, John Krasinski and Steve Carell had a The Office reunion over Zoom, during which the two actors dished on the 15th anniversary of the beloved sitcom. The chat took place during the debut episode of Krasinski's new web series, Some Good News, or SGN, which is meant to bring extra joy and entertainment into viewers lives as they stay home and self isolate due to the coronavirus (COVID-19) outbreak.

The Office, which premiered on March 24, 2005, celebrated its 15th anniversary this month, and Krasinski and Carell took the opportunity to reminisce about the show via video-chat. Over the course of their short chat, Krasinski, who starred as Jim, revealed that he was working as a waiter before the sitcom aired, and after filming the pilot he, "went back to waiting tables because I was sure nothing was going to happen with it." He also noted that the whole cast and crew felt similar, adding: "We all kind of came into it with that vibe. I remember none of us had done anything huge."

Carell added that The Office becoming one of the most popular television shows of the mid-2000s was, "such a happy surprise," saying, "That after all these years people are still tuning in and finding it, even today, it's pretty cool."

The pair also reflected on favorite memories from working on the show. Carell brought up the notorious "Dinner Party" episode, specifically the exchange their characters, Michael and Jim, had over Michael's prized flatscreen TV. "I don't think I've ever laughed harder in my life," Krasinski noted, including a blooper of them all cracking up behind the scenes.

Krasinski later brought up one of the Christmas episodes, during which Michael is dressed as Santa and tried to get coworkers to sit on his lap. "I was supposed to be the button of the scene where they cut to me and make a Jim face," he said. But it turns out, he was laughing too hard to even finish the scene, and had to leave the room.

Unfortunately, the trip down memory lane was short — Some Good News is only a 15-minute show, after all — but perhaps once the COVID-19 social distancing regulations are loosened, fans will be treated to a bigger, and longer, Office reunion.

In the meantime, fans can continue to tune in to Krasinski's YouTube channel for some "Good News."

More like this
Ashton Kutcher Wants Danny Masterson “To Be Found Innocent” In Rape Retrial
By Jake Viswanath
At 28, Debra Jo Rupp Was Living A Much Different '70s Show
By Grace Wehniainen
'The Queen’s Gambit' Season 2 Tweet Wasn’t From Anya Taylor-Joy
By Mary Kate McGrath, Jack Irvin and Grace Wehniainen
All The ’70s Easter Eggs You Missed In 'That ’90s Show'
By Grace Wehniainen
Get Even More From Bustle — Sign Up For The Newsletter
From hair trends to relationship advice, our daily newsletter has everything you need to sound like a person who’s on TikTok, even if you aren’t.