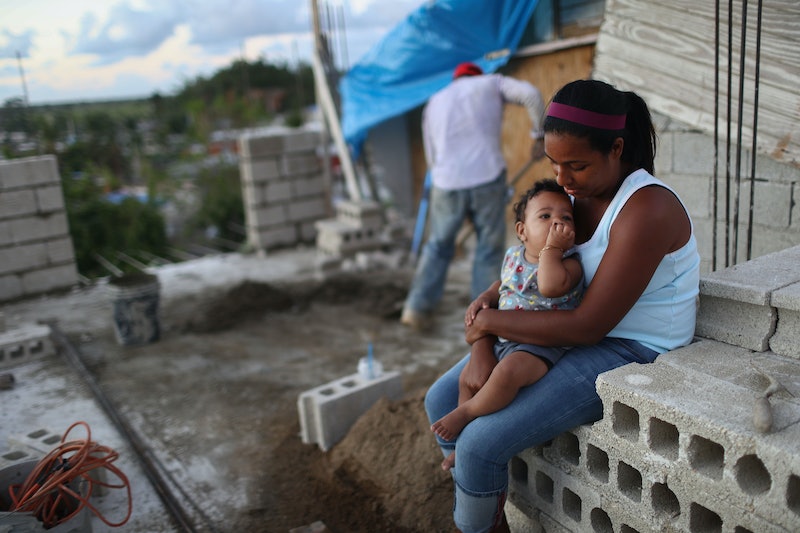 The Puerto Rican government has acknowledged a Hurricane Maria death toll that's 20 times higher than the one it reported at the end of last year. In the months immediately following the September storm, officials announced that 64 individuals had died either directly or indirectly as a result of the event. But in a draft of a report posted online on Thursday, the government suggested that the true number of fatalities could exceed 1,400, according to The New York Times.

The report, called "An Economic and Disaster Recovery Plan for Puerto Rico" and prepared for Congress by the Puerto Rican government, requests $139 billion in recovery aid. It acknowledges that 1,427 more people died between September and December of last year in Puerto Rico than died the year before in that same time period. Methods like this are sometimes used to estimate the indirect casualties of weather events (victims like Pilar Guzmán Ríos, who died when the storm's power outage prevented her from getting necessary insulin, or José A. Molina, who perished from a stress-induced heart attack, according to CNN), which tend to be hard to define and to measure.

"Although the official death count from the Puerto Rico Department of Public Safety was initially 64, the toll appears to be much higher," the report reads. In fact, the 1,427 suggestion is 20 times higher than 64. Analysts have been arguing that Maria's indirect death count has been underreported since the fall.

If the new figure is accurate, it would mean that the death count from Hurricane Maria is closer to that of Hurricane Katrina in 2005. Some estimates put the number of direct and indirect fatalities from that storm at 1,833, according to CNN. In fact, a death toll of around 1,400 would rank Hurricane Maria among the ten deadliest storms to have ever hit the United States, according to U.S. News.

Pedro Cerame, a spokesperson for the Puerto Rican Federal Affairs Administration, told The New York Times that the 1,427 figure has been removed from a chart in the final report. An "official number" for the death toll will emerge from a forthcoming George Washington University study commissioned by Gov. Ricardo Rosselló, but this is not it. However, Cerame told the Times, "We definitely acknowledge [... that 1,427] is a realistic estimate."

"The official number will come, and it could be close," he said. "But until we see the study, and have the accuracy, we won't be able to recognize the number as official." He confirmed that the government intends to update its reported death toll based on the GW study.

According to the Times, the Puerto Rican government's requests in the final report to Congress include $15 billion in education aid, $6 billion for public building repairs, and $26 billion for fixing the energy grid. Most of the island's residents now have power (though not quite all — 25 people were still in the dark as of Monday, CNN reports), but the grid remains vulnerable to storms, according to Scientific American. This is particularly worrisome because the 2018 Atlantic hurricane season has already begun.