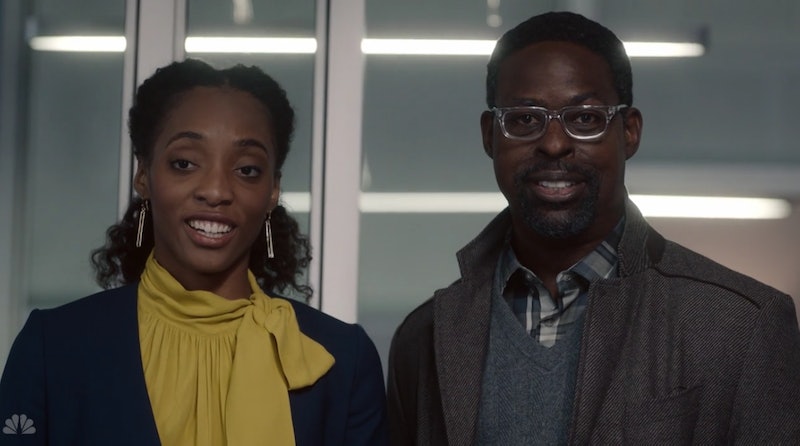 Now that This Is Us fans have recovered from actually seeing Jack's death — he suffered a sudden and catastrophic cardiac arrest after excessive smoke inhalation in a house fire — there are even more questions as to which direction the show will go. The first season-and-a-half was all about finding Jack's death and how it all happened, and now… what comes next? Will we keep seeing into the future with flash forwards on This Is Us? (Series writing, Jas Waters.)

The post-Super Bowl episode of This Is Us was primarily focused on the house fire that killed Jack, but there was one small glimmer of hope. Randall's daughter, Tess. She was upset for a majority of the episode, and she finally told Randall that she was afraid that, through a new job and new foster kids and a new grandpa (aka William), Randall was trying to get a new life. When Randall assured Tess that it wasn't the case, that he was just trying to help as many people as he could and that he would always be her dad, Tess was lifted. She loves fostering, too. In fact, she loves it so much that, in a flash forward, viewers got to see a much older Tess as a social worker, introducing a foster child to his new home. Older Randall was there to take older Tess out to lunch, and he was beaming with pride. It was a moment, OK?

Jumping forward seems like it's always been a part of the plan — creator Dan Fogelman told Entertainment Weekly, "[The post-Super Bowl episode] was one of a couple of episodes that were part of my initial pitch to NBC. Many of the episodes were for future seasons upcoming, but this was one of the first ones." That seems to mean that Fogelman has always planned some LOST-esque jumps in time on This Is Us.

That Randall and Tess moment was the first real flash forward viewers have seen, and it was a nice change of pace from the flashbacks. It's not that I don't love seeing Milo Ventimiglia in shorter shorts and a mustache, because I do, I really do, but seeing a graying Randall opened my eyes to the potential of watching all of the Big Three grow older. Let's give Kate and Toby some kids and Kate a nice little singing thing. Let's see more of Randall being a big, proud dad. And don't forget Kevin (because his parents always did) — viewers need to see Kevin settled in his life and working away all of the pain and guilt he has toward his father's death. The post-Super Bowl episode definitely started Kevin on the right path, but it would be nice to see him truly recovering.

Speaking of healing, Mandy Moore stopped by TODAY the morning after the Super Bowl episode to talk about what's next. "I think all of us are tremendously relieved. Milo and I have known since the very beginning — not all of the specifics around how he passes away," Moore said. "But it's nice to pop that bubble a little bit and now we can move forward with the show and answer more pressing questions as well." And don't worry, the cast was also sobbing like little babies, too. "None of us could speak afterwards, we were sort of speechless," Moore told Savannah Guthrie and Hoda Kotb. "We were recounting some of our favorite parts of the episode and favorite lines, and we would all start crying. It affects us too."

And while there will now apparently be some flash forwards, This Is Us hasn't given up on the past just yet. In an interview with Esquire, Milo Ventimiglia talked why Jack's death opens up the show to telling how Jack lived:

"There are so many questions with Jack. His upbringing, what happened to him in Vietnam, what happened to him after Vietnam before he met Rebecca? And those early days of Jack and Rebecca… His brother, I think is something that's going to come up relatively quickly, and play out over the next season or so. There's still so much to know about this man, from all the eras, so I'm excited to focus on how Jack lived as opposed to worrying about how he died."

Basically, time means nothing on This Is Us and viewers should just strap in for the ride. Just bring your tissues, because past or present, the tears are bound to flow.