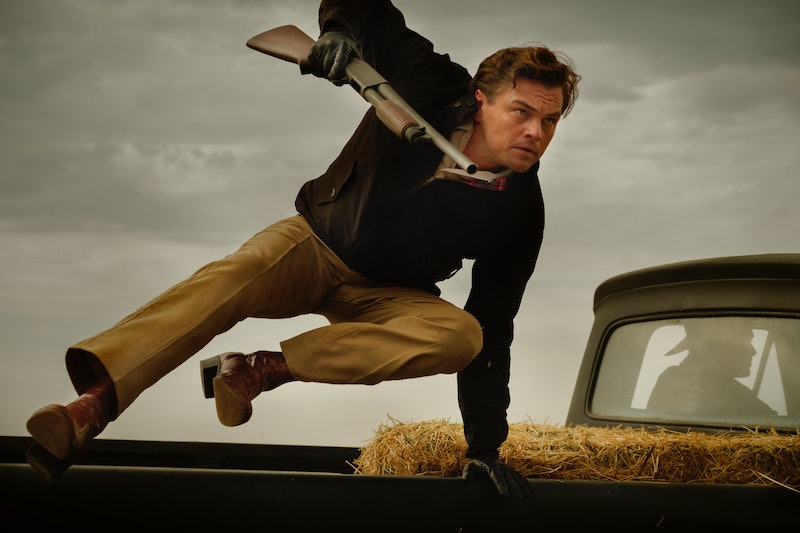 Once Upon a Time in Hollywood is a whopping two hours and 45 minutes long, but you won't want to rush out too quickly when it ends. Well, you might want to — that's a damn long movie — but if you do, you'll miss the Once Upon a Time in Hollywood credits scene, which gives viewers another funny moment with actor Rick Dalton (Leonardo DiCaprio. It also features an Easter egg that will stand out to fans of Quentin Tarantino's movies. Spoilers ahead.

Rick is an actor who was the star of a popular Western TV series in the '50s called Bounty Law. The role he played on the show is by far what he's best known for, but after leaving the show and failing to jumpstart a film career, he starts doing a bunch of guest spots on other TV series and realizes his heyday is behind him. He also, apparently, does commercials while in character as a Western star, and that's what we get a look at in the scene that plays at the start of the credits.

The ad is for Red Apple cigarettes. Rick talks about them, explains how great they are. It's all very old-fashioned commercial. But then, it's revealed that we're not watching the ad, but watching Rick film it. The camera stops rolling and Rick spits out the cigarette, which is definitely not his brand of choice. He also complains about the cardboard cutout of himself that is being placed in stores and says they shouldn't have picked a photo where he has a double chin.

The clip is funny enough on it's own, but big fans of Tarantino will recognize Red Apple cigarettes right away. According to The Quentin Tarantino Archives Wiki site, Red Apple cigarettes have appeared in nine movies. In addition to Once Upon a Time in Hollywood, the cigarettes popped up in the Tarantino-directed films The Hateful Eight, Inglourious Basterds, Kill Bill: Vol. 1, Pulp Fiction, and Four Rooms. They were also in Tarantino collaborations with director Robert Rodriguez From Dusk Till Dawn and Planet Terror.

Most surprisingly, the cigarettes were seen on a billboard in Romy & Michele's High School Reunion. According to a 1997 Entertainment Weekly article, they were mostly included as an inside joke between friends. Tarantino was dating star Mira Sorvino, and graphic designer Jerry Martinez, who worked with Tarantino and created the Red Apple branding, was friends with Romy & Michele's production designer, Mayne Berke. The movie also had a shoutout to the Big Kahuna burger, which had been featured in Pulp Fiction. And there was also a logistical reason for this. Berke told EW, "It simplifies things. One of the most laborious and time-consuming things you can go through in making a film is getting clearances on [trademarked products]."

Tarantino has said he would retire after directing 10 feature films (well, sort of), which leaves only one more after Once Upon a Time in Hollywood. But no matter how his plans turn out, seeing as Red Apple cigarettes have been in other movies, too, these fictional smokes could still have a life onscreen, long after he calls cut for the last time.

More like this
You Might Want To Rewatch 'Elvis' For This Britney Spears Easter Egg
By Grace Wehniainen
Sadly, You Can’t Stream 'Minions: The Rise Of Gru'... Yet
By Morgan Leigh Davies
Anne Hathaway’s ‘The Devil Wears Prada’ Anniversary Post Turned Political
By Brad Witter
All The Sneaky Lindsay Lohan Movie Easter Eggs In Her New Ad, Explained
By Stephanie Topacio Long
Get Even More From Bustle — Sign Up For The Newsletter