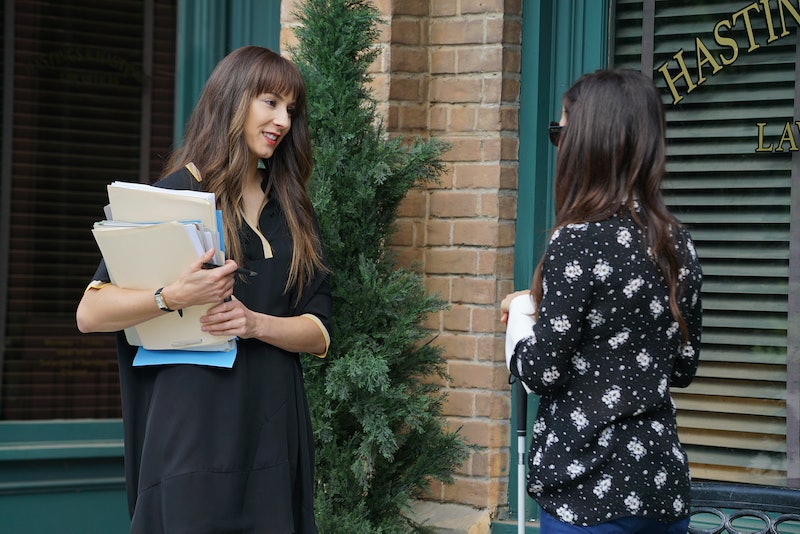 Part of the joy of watching Pretty Little Liars is the buzz of swapping theories on Facebook or Reddit. So choosing just one A.D. theory to read before the finale is a near-impossible task, since every episode seems to spawn dozens of well-thought-out, inventive new explanations for who the supervillain could be. The argument that Spencer has a twin is obviously both old and hyper popular; Tumblr user The Outlast explained their argument that Bethany is both Uber A and Spencer's evil twin back in March 2017. But Tumblr user The Best PLL Theories penned their own version of the Twincer theory (which is subtly different, but in important ways) this month, and this, I'd argue, is the one theory that's really essential reading.

Sadly, some of The Outlast's arguments don't hold water after recent revelations. For example, they argue that Bethany is "the real Black Widow," and that "The first time we were introduced to the Black Widow was in the season 4 premiere titled 'A is for A-L-I-V-E." But showrunner I. Marlene King recently revealed to Entertainment Weekly that this A.D. reveal will be an entirely new story, and as such, you won't be able to figure out their identity from clues from before Season 7.

King stated that "all of these last 10 episodes, we’ve dropped a lot of Easter eggs intentionally because we wanted fans to have a really good chance to figure this out. This A.D. is separate in terms of playing the game from those other A's." In contrast to The Outlast's theory, The Best PLL Theories limits themselves purely to information we've gleaned from Season 7. So let's explore.

As The Best PLL Theories admits, "none of this is overly new. This is just the summation of everything we’ve been talking about... I wanted to put all the ideas into one post, rather than 31529 mini posts scattered here and there." But here's where it differs from The Outlast's twin theory: This Tumblr user doesn't necessarily believe Spencer's twin is Bethany. They do consider it a possibility, but argue "for this theory, let’s just forget Bethany for a second." They point out that a whole new character could account for the initials A.D., arguing, "Spencer’s twin could literally have the initials A.D., since we know she would be Mary Drake’s child. Her first name would start with A and the D would stand for Drake."

They also picked up on one intriguing detail in that confusing airport scene, when Ezra sees what looks like Spencer hanging out with Wren there:

"Wren and 'Spencer' were arguing. Amongst muffle, I heard Spencer say 'stop calling me that' (let me know if you heard differently). Did Wren have a slip-of-the-tongue moment and call her Spencer rather than the twin’s real name?"

There are lots of great reiteration of all the clues: the fact that people keep mentioning twins to Spencer, Dr. Cochran describing delivering two of Mary Drake's babies, etc. But the strongest part of the theory, to my mind, is how it uses the recent commentary we've had from the cast about A.D.'s true identity to argue for Twincer.

According to the Entertainment Weekly conversation, the cast didn't know who A.D. was, with one exception. King said, "The person who is ‘A.D.’ asked me not to tell anyone because that person didn’t want to affect certain scenes in certain ways." As such, we've only recently had veiled feedback from actors as to how they felt about the reveal, and given that it's still relatively fresh, they've been fired up enough to drop some potential clues. Skip to a minute into the video below:

Harding states of the reveal, "fans will be satisfied up to a point. Right when it seems it's gonna be really great it might do a little," and moves his hand abruptly in a different direction. According to the theory:

"...what could be greater than a liar being AD? Ian could be referring to the fact that they initially show us Troian under the hoodie, making us think Spencer is AD. Then, after commercial break, they will reveal it’s just her twin, hence the “it might do a little [downwards hand motion]”. We will be satisfied to a point, he said. It’ll start off amazing by thinking it’s Spencer, oh wait, it’s another twin."

The same theory references an interview this month with Keegan Allen (who plays Toby), who says at 10:19 in the video that there will not be another Spoby kiss:

But Tumblr user The Best PLL Theories is nobody's fool: "Yet — there was one in 718. Either Keegan lied, or that was Spencer’s twin." They also point out that in the same episode, Toby states, "That's not the Spencer I know," as a possible instance of foreshadowing.

On top of all this, if you recall from the last major reveal, when we discovered Cece was behind the torment, you'll remember that the show has always placed a lot of emphasis on emotional motivation. A non-Bethany twin is a pretty random figure, and it's hard to imagine what the motivation for torturing the Liars would be.

Luckily, The Best PLL Theories has us covered: Twincer was raised in Radley, not because she needed the psychological support but "as a form of daycare, because Mary was considered an unfit mother." That's where she met Charlotte and "When Mona came to Radley and started telling Charlotte about everything she did to her sister, Charlotte and Twincer wanted to play. They wanted a turn at harassing Spencer and her friends." The plot thickens, but to condense paragraphs of intricate arguments into a couple of lines, Twincer is jealous of Spencer's closeness to her friends, and, after failing to break up the group by putting them under increasing pressure, wants to replace her.

Time's ticking before the big reveal. If you want to read one of the most convincing (and most importantly, current) theories out there, opt for this one. You won't regret it.