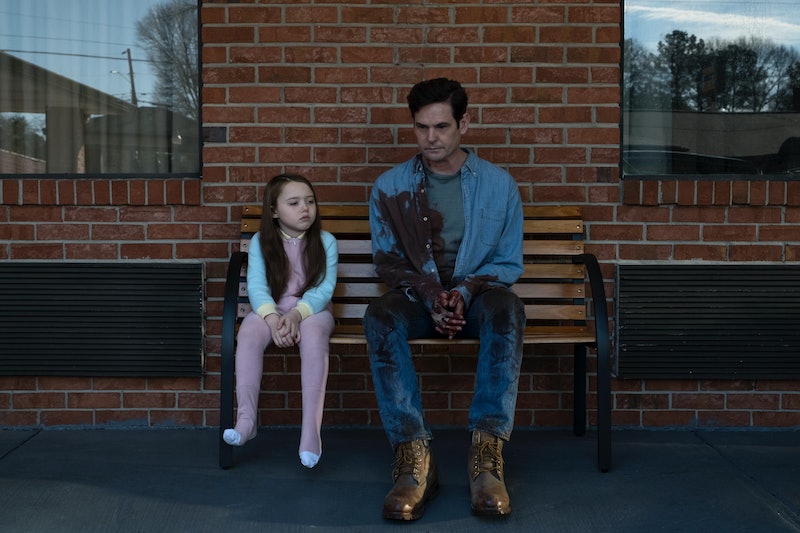 From the time I was young, I gravitated towards ghost stories. And to this day, I haven't lost that interest. So when I saw the trailer for Netflix's The Haunting of Hill House, I immediately was ready to marathon it all. But I wasn't expecting to get scared, and I certainly wasn't ready for the most haunting moment from The Haunting of Hill House, which is more than a moment for me, but instead a whole episode.

After watching the entire terrifying season of Hill House, it's Episode 5, "The Bent-Neck Lady," that has kept me up at night. The episode was a critical turning point in Hill House Season 1, revealing the identity of the ghost that had haunted Nell Crain since childhood. Spoilers ahead. For the previous five episodes, it was established in flashbacks, that Nell, one of the two youngest of the Crain children, started suffering from sleep paralysis around the time the Bent-Neck Lady began appearing. It stood at the side of her bed, hovering over her, and caused her to take that anxiety the Bent-Neck Lady created into her adult life, manifesting in the form of the sleep disorder.

I don't find much horror truly terrifying, but watching Nell wake up in a panic, her mind awake, but her body still asleep, horrified me. The sleep paralysis detailed in Episode 5 of The Haunting of Hill House alone scared me, a horror pro, to death because I know exactly what she was feeling.

I also suffer from bad sleep paralysis, and I know exactly how terrifying and debilitating it is. I'll feel strong hands grabbing at my body all over when I can clearly see no one is there (if I can see anything at all). I've seen dark figures hovering over me, even choking me sometimes. Like Nell, I've also shot up in bed, screaming, "No!" at the top of my lungs. I'll hear deafening loud noises and not realize that it's not real. And every single time, I can't breathe and I can't move, exactly like Nell. The panic that this causes is horrifying, and seeing it on screen didn't just make me feel afraid for Nell, it made me feel helpless for her.

It also made me identify with Nell, which only made the last three minutes and fifty seconds of "The Bent-Neck Lady" all the more terrifying, resulting in the most haunting moment in Hill House. At the end of the episode, the audience finally sees why Nell went back to the Hill House, to confront the lingering hold had over her, and how she died. As was already hinted, it turns out that Nell didn't die by suicide — she didn't hang herself, at least not willingly. Instead, the house, or rather the ghost of Olivia Crain (her mother), put her under a trance. In those final moments, Olivia tricked Nell into putting a noose over her neck, and pushed her off the landing.

The image of a ghost pushing her own daughter to her death is horrifying enough, but the most traumatizing part is that the scene doesn't end there. Instead, viewers see Nell's body drop, so to speak, into each time the audience, and Nell herself, has seen the hanged woman before. From outside her motel room earlier that day, to when Arthur (Nell's husband) died, and finally to the first time young Nell saw her, in her room.

Not only did Nell suffer from the same fate as her ghost, but this sequence reveals that she was the Bent-Neck Lady all along. Nell becomes the very thing that has haunted her since childhood, and in one, tragic moment, the audience is shown that the Bent-Neck Lady was never really a terrible ghost, but instead Nell herself, seemingly going back and trying to warn little Nell of her fate. And, just like that, Nell's struggles and her tragic metamorphosis into the Bent-Neck Lady will forever be in my brain when I think of Hill House.

The end scene is insanely disturbing to watch, and it's made all the more sorrowful when combined with this woman's life journey (the physical scars left by Hill House, the sleep paralysis, the sudden death of her husband). It made me want to go back and give Nell a big hug; let her know that she's okay and that this should never have happened to her. Because it really shouldn't have. She had a will to live, she was trying to fight back against this thing haunting her, but in the end, she just didn't know how badly the house wanted her dead.

And that's what makes it so terrifying. We all go through really bad things (maybe not as bad as Hill House), but hope to come out on top. This dark and morbid end, with it's graphic visuals of her hanging, her neck bent at an impossible angle, is a sick way of showing that good people don't always get happy endings. Sometimes the dark wins.

More like this
'The Queen’s Gambit' Season 2 Tweet Wasn’t From Anya Taylor-Joy
By Mary Kate McGrath, Jack Irvin and Grace Wehniainen
Netflix Shut Down 'Bridgerton' S3 Rumours About A “Very Dark” Storyline
By Bustle
'Happy Valley' Recreated This Moment From S1 In Its Penultimate Episode
By Sophie McEvoy
9 Time Catherine Cawood Was An Absolute Badass In Happy Valley
By Sophie McEvoy
Get Even More From Bustle — Sign Up For The Newsletter
From hair trends to relationship advice, our daily newsletter has everything you need to sound like a person who’s on TikTok, even if you aren’t.