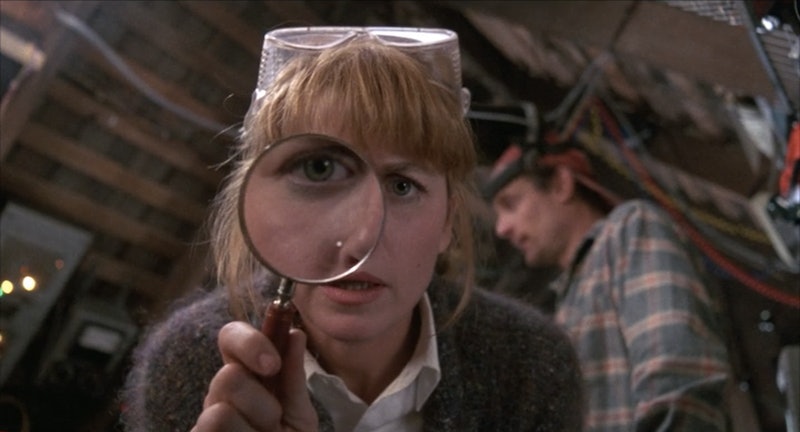 It's about that time — the end of the month, when beloved Netflix picks are leaving the streaming service and some new ones join the party. But there's one film on Netflix fans should watch ASAP before it leaves in June 2017: Honey, I Shrunk The Kids. The classic film is an instant blast from the past and literal time warp to 1989. It’s lightheartedness and totally unrealistic plot make the movie something that everyone, especially ‘90s kids looking for some nostalgia, could use right now.

The peak ’80s film (that '90s kids grew up loving) had the crazy fun of Back to the Future, but with cheesy family camaraderie and even more innocence of subpar special effects. The film, which is still wildly entertaining today, tells the story of as cooky, mad scientist-like dad Wayne Szalinski (Rick Moranis) who attempts to invent a ray gun capable of shrinking objects. Amidst tensions within his family and neighbors, the Thompsons, Szalinski’s invention accidentally shrinks his children and the Thompson kids.

While the parents frantically attempt to rescue their sons and daughters, the kids work together (not without some sibling fighting along the way) to make it out alive from the *crazy* obstacles they face. There are no iPhones, no texting — just a good, old-fashion team work and a glimpse at a simpler time.

The film is still a fun ride, largely because of how ridiculous it is and all of the memories and small nuggets that’ll come rushing back. In true '80s fashion, it includes child star Jared Rushton (who also starred in Big and Overboard), and is short of one hour and 40 minutes long. They just don’t make ‘em like that anymore. And of course, the film has a happily ever after, with the Szalinskis and Thompsons gloriously sitting together around a feast. All friction is now gone.

Any film that has a shrunken kid almost getting eaten while helplessly swimming in his dad’s bowl of cereal is one worth revisiting. Priceless.