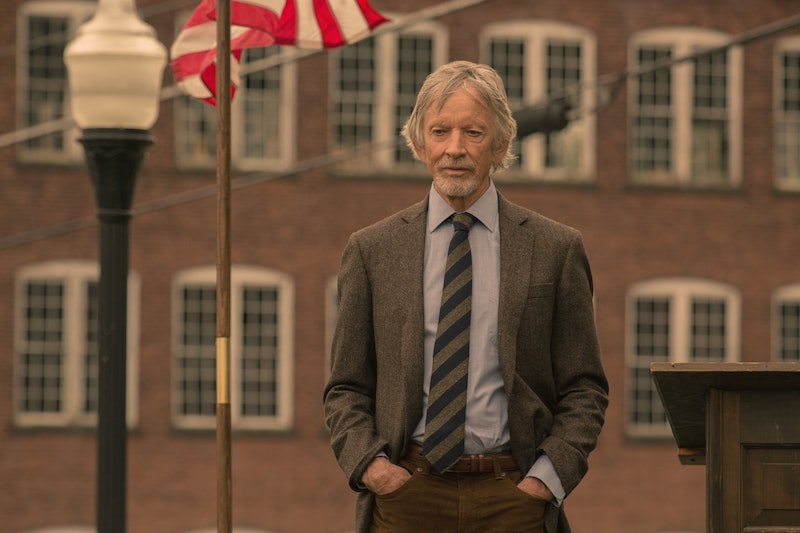 There are so many clues on Castle Rock, you'll probably need to make your own case file to keep track of every detail and formulate a theory. References to Stephen King's stories and multiverse have meaning, as they build the fabric of this fictional town. That said, the lesser-known novel Needful Things is a clue for Castle Rock, and could explain some of the larger mysteries — including the name of Bill Skarsgård's mysterious character. Spoilers ahead for the first four episodes of Castle Rock and for the Needful Things novel.

The novel, plain and simple, is about a shop in Castle Rock that sells magical items, steals souls, and manipulates its clientele into doing terrible things and ultimately turning on one another. While creepy enchanted stores pop up in popular culture often, from Little Shop Of Horrors to Gold's pawn shop in Once Upon A Time, this King novel and the 1993 film adaptation are not his most popular.

What's the connection to Castle Rock, other than the location? There are several. The good Sheriff Alan Pangborn of the Hulu series is also the protagonist in Needful Things. The novel's title page proclaims it to be "The Last Castle Rock Story," though it's set in 1991, the year of the snowstorm/Henry's disappearance.

One establishment in Needful Things is a tavern called The Mellow Tiger, which is where you're likely to find Molly Strand after hours on the Hulu series. Speaking of Strand, her teen dealer is Dean Merrill. While the character Ace Merrill was made popular by Kiefer Sutherland serving bad boy realness in the film Stand By Me, which is based on Stephen King's short story "The Body," Ace is a major player in Needful Things as well.

Ace, now an adult, is recruited by the evil shopkeeper and villain of Needful Things, Leland Gaunt. Ring any bells? On Castle Rock, Henry Deaver finds a newspaper reading "Shopkeeper Missing After Oddity Store Fire" early on in the series. In Episode 4, Henry marks his father's grave with an X — and one of Ace's tasks in Needful Things involves a treasure map.

At the end of Needful Things, Castle Rock is blown up by dynamite and pretty much ceases to exist. On Castle Rock the town is unincorporated and "literally off the map," its very existence in danger as well.

Are these references piling up because Castle Rock is secretly a Needful Things sequel/adaptation, or is it a coincidence? Episode 4 also mentions a character named Vince Desjardins, one of Ace Merrill's cronies in "The Body." There's another, kinder, member of the Desjardins family in Carrie as well. When Henry goes to talk to Vince's brother Joseph Desjardins on Castle Rock, he mentions the events of "The Body," specifically that a boy went missing and was found by the lake in 1951.

It's difficult to say yet whether or not Needful Things is more of a clue than the others. At a roundtable interview during the 2017 New York Comic-Con that Bustle attended, co-creator Sam Shaw described the series as a "love letter" to King. Shaw argues not only for this story to stand on its own, but for more direct elements of the Stephen King canon to be implemented into the plot of Castle Rock — instead of just as an Easter Egg or a reference to past events that don't affect the present day.

"If you can retell Hamlet 100,000 times and reset it so its a reflection of what life is like in the eve of World War Two, or what it's like in the era of the War on Terror; and if we can revisit the death of Bruce Wayne's parents in that alley 17 times on screen, I also feel like the Stephen King library — which is so important to so many of us and defined what being afraid as an adolescent is, and as an adult is — that is material that we should be able to return to and reinterpret and expand upon too," he says.

In the novel, it turns out that Gaunt is a demon. Doing business with him is making a deal with the Devil, and there has been a lot of devil talk on Castle Rock, particularly when it comes to the kid in Shawshenk Prison. Not only could Skarsgård's face on the show be described as "gaunt" with little to no effort, but this could be a clue as to what's really going on with Castle Rock. Maybe the kid is Leland Gaunt, the missing shopkeeper himself. He does seem to have an ability to make others do his bidding, and Dale Lacy blamed him for everything wrong in town and called him the devil incarnate. Maybe the demon escaped Gaunt and found another host in the shape of a Skarsgård.

Whether Castle Rock is based primarily on Needful Things or not, the book definitely seems like something that fans would want to revisit as this story progresses. The past is coming back to haunt Henry Deaver, demons and all.