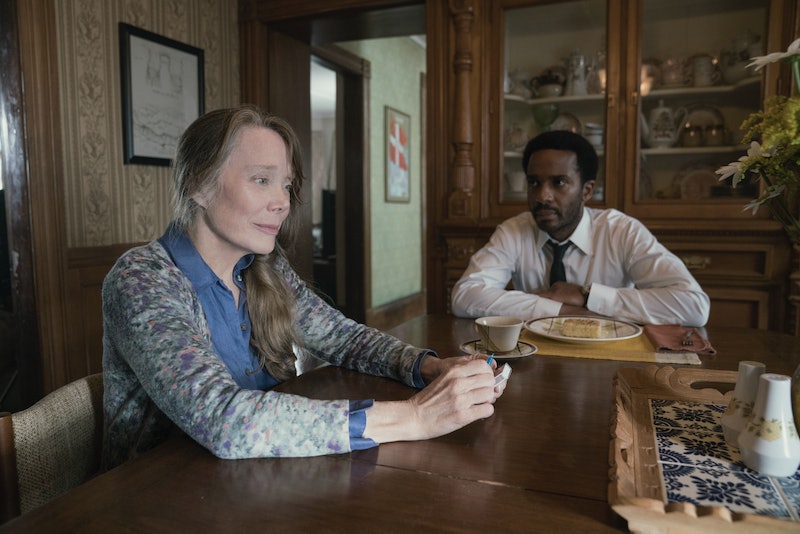 While Hulu's Castle Rock is not based on any one Stephen King novel or short story, it is set squarely in the multiverse that the best-selling Mainer has created over his life's work. Many of the stories you know and love are referenced, if not considered town history in the new series. The Stephen King Easter Eggs in Castle Rock range from visual cues to ominous warnings and a celebration of all things King.

First, actors like Sissy Spacek (Carrie), Bill Skarsgård (It), and Melanie Lynskey (Rose Red) are dipping back into this world after performing in other King adaptations.

But that's not all. Do both Molly and "The Kid" have the shine on Castle Rock? It sure seems like they might. That's not necessarily an Easter Egg but the potential presence of "the shining" or "the shine" is a quintessential Stephen King element which is mentioned explicitly in The Shining (naturally) but also pops up in Doctor Sleep, the recent film adaptation of The Dark Tower, and possibly both Pet Sematary and The Dead Zone. Arguably the titular character in Carrie has the shine as well, though as Stephen King's first novel it likely was not meant as part of a multiverse yet. The shine itself manifests in many ways. In The Shining, Danny can telepathically communicate and manipulate others. Other characters in King's stories have different psychic and empathic abilities.

As for the series itself, here are the many references that pop up right off the bat,. Not only are there spoilers ahead for Castle Rock's first three episodes, there are also various spoilers for King's stories as well.

When Skarsgård's character "The Kid" is found in a hole under the infamous prison, there's a can of cigarettes. Morgan Freeman's character in the film adaptation traded in cigarettes. Warden Norton gets a mention. The hole itself is possibly referencing the sewer pipes used to escape the prison — if not the sewers in It.

There aren't many characters in Castle Rock that are named King characters, but Sherriff Alan Pangborn from Needful Things is one of them. Pangborn also appears in The Dark Half (pictured above). One of the many headlines that Henry Deaver encounters talks of a missing shopkeeper — like the antagonist of this story.

Henry Deaver's (André Holland) father was found frozen, a la Jack Torrance at the end of The Shining. In a flashback, Molly Strand (Lynskey) writes "Henry Deaver" over and over in a notebook — which would normally be dismissible as Teenager With A Crush 101, but not in this context.

Jane Levy's character on Castle Rock is also named Jackie Torrance — which, if not a very on the nose Easter Egg, means she is related to that fated family.

Henry Deaver finds a headline reading "Rabid Dog Tears Through Town," definitely in reference to this canine tragedy. There is dog imagery throughout, as well. A dog is seemingly haunting Dale Lacy (Terry O'Quinn) before and after he commits suicide.

"Remember the dog," Dale Lacy asks in Episode 2 voiceover? "The strangler? Sure you do." While the dog is another Cujo reference, the Castle Rock Strangler is from this book.

After fans spotted balloons in the trailer, Episode 3 features Molly in a yellow jacket not unlike the iconic raincoat. Groups of children getting up to trouble is also a common element of King stories like It and The Body — and Molly certainly encounters some little rascals in this episode.

Also known as Stand By Me, this short story is also mentioned by Dale Lacy in Episode 2. "1961," he says in the episode. "The summer after they found that boy's body by the railroad tracks." Henry also finds the headline "Anonymous Tip Leads To Boy's Body" in Lacy's things.

Molly Strand's teenage drug dealer is named Dean Merrill. That's an important (if not beloved) family name in CastleRock. John Merrill, also known as "Ace," is the antagonist in "The Body" and was played by a bleach-blonde Kiefer Sutherland in Stand By Me. One of Ace's buddies, Richard Chambers, is also mentioned in the pilot episode — Henry is defending his murderous wife. Additionally Ace and uncle Reginald "Pop" Merrill appear in Needful Things and other members of the family pop up from time to time.

Finally, the opening credits is a love letter in and of itself to the way we devour King's writing. The sequence includes phrases and full pages of the creator's writing.

The first page is from Needful Things, with "THE DEVIL" circled an other sections underlined, including a Bible verse. The next is Chapter 19 of 'Salem's Lot. Then there's the table of contents from The Green Mile, with notes about possible references and allusions graffitied on the page. Then the title page of Dolores Claiborne.

Next is a map of Maine that includes the fictional towns of Castle Rock and Derry. Written on the map is the word "Arrowhead," which is a reference to The Mist. Also marked on the map is "Storm Of The Century," which is the title of a mini-series King wrote and produced in 1999.

The pages continue and become props, including a file titled "Misery's Revision," Jack Torrance's "all work and no play" typed page, as well as several handwritten notes about Cujo and a map of Shawshank Prison. The final pages include more It and The Shining references with the highlighted line "they float, Georgie" and the underlined "REDRUM, MURDER, REDRUM, MURDER."

Will all of these references and characters eventually pop up? Hopefully, but in just these first couple of episodes there is already so much to devour.