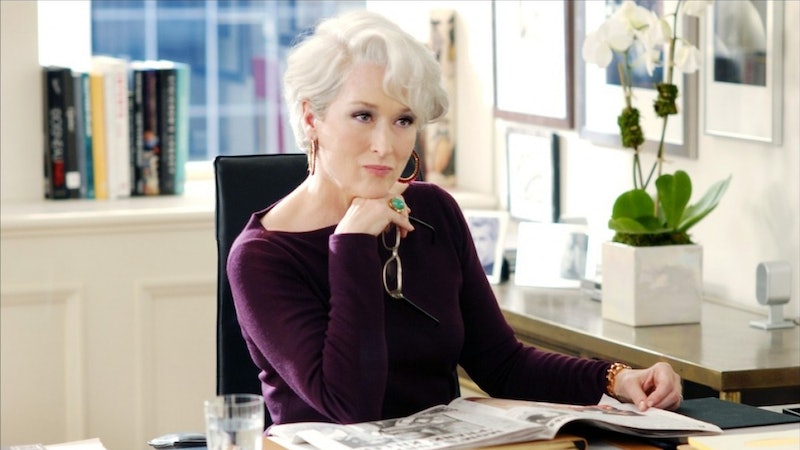 Meryl Streep's iconically intimidating magazine editor, Miranda Priestly, has long been rumored to be based on Anna Wintour, but it turns out that some of the character's iconic quirks were actually far from reality. During a recent interview with Entertainment Tonight, former Vogue editor and author Andre´ Leon Talley revealed the one thing The Devil Wears Prada got wrong about Anna Wintour. And it will change how you view Miranda's coats forever.

The 2006 film — based on the 2003 novel of the same name — was reportedly inspired by Lauren Weisberger's experiences working as Wintour's assistant, but Talley explained that some things were exaggerated for the screen. "[One] thing the movie got wrong is Anna would never throw her coat down when she came to the office," said Talley, who worked alongside Wintour at Vogue for 27 years. "Anna Wintour has never thrown a bag or coat down — or I haven't seen it. She would not throw her coat down." Instead, Talley explained that the editor usually hung up her own coat quietly. "She might hand it gently to an assistant to put in a closet, but she was not slashing her coat around like some bad, baby orca," he continued.

The Chiffon Trenches author also revealed that during his time at the magazine, he never once saw people running down the halls in their designer shoes. "I had never seen one editor run, dash to Anna in [her] office," he explained. "You could be walking fast, but you did not run in your stilettos."

Still, Talley confirmed that there are quite a few similarities between what Miranda and Wintour, namely some of the tasks she would ask her assistant to complete. "She would ask assistants to go get things, like the Harry Potter book for her children," Talley said. "Make sure you get that book because she's going to have it to take on the weekends. That was right."

Most notably, The Devil Wears Prada nailed Wintour's habit of having her clothes dry cleaned every single day. "Oh the dry cleaning came, like every morning," Talley noted, referencing the way Andy frequently dropped off Miranda's dry cleaning at her townhouse in the movie. "It has been documented, every night after she had been out she would stop by her dry cleaners on the way to work. ... Dry cleaning is paramount to her existence, nothing gets soiled."

Still, regardless of what the film got right and wrong about Wintour, Talley praised Streep for her performance. "A lot of the things though, the nuances were right," he explained. "Meryl Streep did a great job. Anna, I think, was even amused and entertained by Meryl Streep." Wintour herself confirmed that she found Streep's performance as an intense Editor-in-chief to be "entertaining" during a 2006 interview with Barbara Walters.

"Anything that makes fashion entertaining and glamorous and interesting is wonderful for our industry. So I was 100 percent behind it," Wintour said during ABC's Most Fascinating People special that year. "I think it's actually helpful to people that you are working with, that you can make decisions," she said. "So, if Meryl seemed somewhat strong, I respect that." Regardless of how accurate The Devil Wears Prada actually is, at least fans know that the movie has both Wintour and Talley's seal of approval.