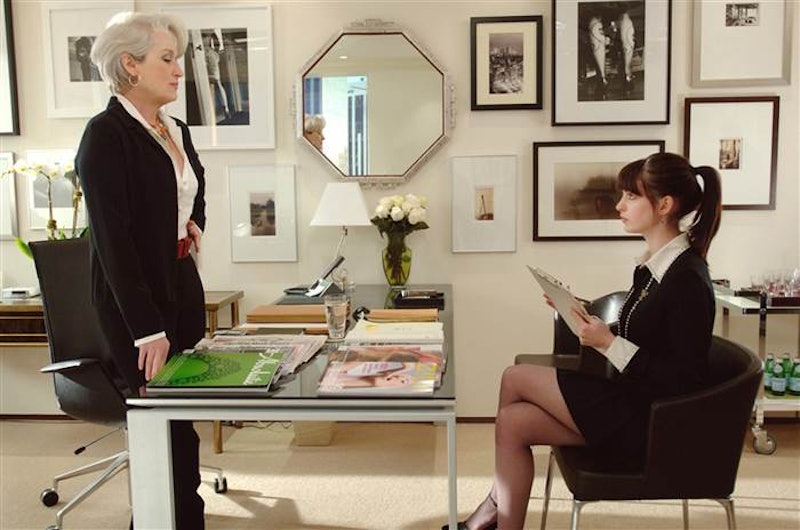 We all work — a lot. I’m guilty of it, too. Americans, especially, are expected to work their tails off, and for what — the pot of gold at the end of the rainbow? Upon watching The Devil Wears Prada recently, I was struck by just how frantic and shaken Andy is for three-quarters of the movie. Miranda is calling her constantly – I would have post-traumatic stress disorder just from hearing my ringer if I were Andy — Emily is worried about nothing but going to Paris, and Nigel provides just a modicum of helpfulness to Andy over the course of the film. When she gets to Elias-Clarke, Andy is for all intents and purposes on her own. At the end of the film, it dawned on me just how much The Devil Wears Prada fetishizes an aggressive, hostile job environment, and it’s totally wrong.

When Andy gets her job in The Devil Wears Prada , why is it that no one can onboard her (those are my last vestiges of corporate speak right there for you) and ready her for her position? No bathroom breaks, 15-minute lunches, a certain way to answer the phone, the computer system — Emily dumps it all on Andy and then bails with Giselle Bundchen to go not eat their lunch. Because Andy is not fashion-y enough for Emily or Runway, she is essentially set up to fail and relentlessly bullied. Now, it’s not that Emily knows any better — she’s already been drinking the Runway Kool Aid. This is Emily’s normal. This is what she thinks a workplace is. But she should know that helping Andy is in her own best interest — if Andy is good at her job, Emily gets a) a little bit of help for the demanding Miranda Priestly, and b) her chance to go to Paris and not have to worry about what’s going on in New York.

As Andy completes the crazy quest that Miranda and Emily send her own, she becomes “good at her job” — whatever that means. It means really that she stuck around long enough past the point where anyone else would have left. Just because you have reached the top of a mountain doesn’t mean that it was the right mountain to climb. Andy slayed her dragons, but at what cost? She ruins nearly all of her relationships, she stabs Emily in the back to get to Paris, and she loses sight of why she even came to New York in the first place.

I had a job once where I was in a very similar position to Andy — the instructions were vague, but I was expected to always know what to do and never ask questions. My supervisor frequently chewed me out for minor issues. After-hours asks came pouring in, and I was expected to be available pretty much 24/7 lest my supervisor need help with something. My coworkers were toxic, always ready to steal an idea or tattle on a colleague. It was hell, and I took it, because I was young and didn’t realize that’s not how it has to be. It was in a competitive field similar to Andy’s fashion industry job, and I was honestly at the point where my nerves were so frayed I wanted to start seeing a therapist (I had never felt the need to go to one before, so you can see where my mind went).

One day, I woke up, lined up enough side work to keep me afloat for a little while, and I said, “Enough.” I realized that giving up my relationships and my personal health wasn’t worth it, similar to how Andy eventually feels in The Devil Wears Prada. My family and my now-husband were so supportive (which helps when you're making a hard choice), and quitting is the best thing I've ever done for my career.

You can work in a competitive environment and not be thrown to the dogs at every corner. You can be truly excellent in a position you love and be able to turn your phone ringer off because you will not get a phone call in the middle of the night from your boss. The Devil Wears Prada shows none of this middle ground ­– instead, it portrays a frenetic, abusive workplace where everyone is afraid to learn and grow — remember what Miranda did to Nigel, taking away his promotion to protect herself? That’s not healthy, nor is it right. The drama in The Devil Wears Prada lies in this environment, but it shouldn’t be where we get our drama from in real life.