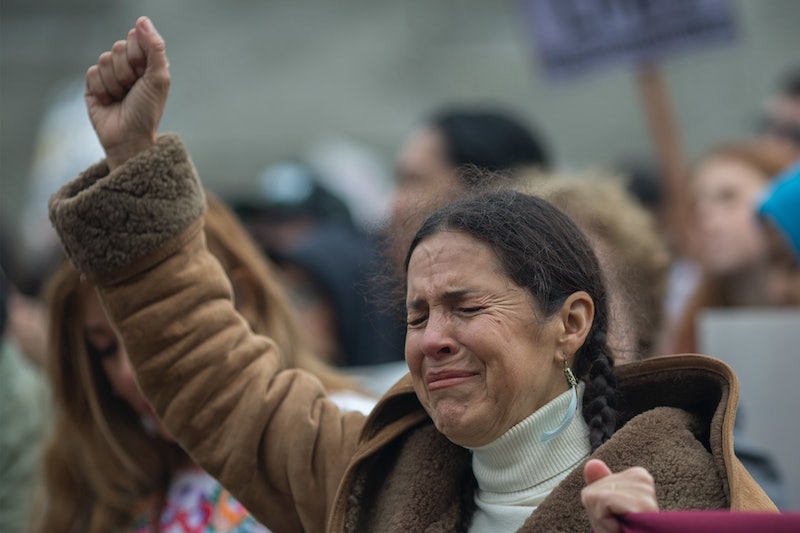 The battle for women's rights in America is being fought at the state level. According to the Guttmacher Institute, 1,053 provisions related to reproductive health were introduced in states around the country prior to April. Of those, 431 would restrict abortion services. To this end, the key move that you can make right now to stop sexist legislation in its tracks is to get involved in local and state politics.

Sure, there are problematic things happening at the national level. To name but a few, the Republican health care bill would affect women to a greater degree than men, Trump signed a bill that allows states to defund Planned Parenthood, and thanks to Trump's faith-based executive order, some women might not have access to free contraceptives with their insurance.

But much of the country's women's rights battles are at the state level, especially if Trump is able to appoint another Republican to the Supreme Court. Roe v. Wade could actually come into play only if the right court cases advance to the Supreme Court. That, in turn, can only happen if anti-abortion legislation is passed in the states. By getting involved in state politics, you can help keep that from happening.

Much of your involvement would need to involve pressuring existing officials and representatives, but since they're a lot closer to you, that's not a problem. Plus, if you're lucky enough to live in one of the three states with legislative elections, you could jump right in and try to elect feminist senators and reps. There are also two states with gubernatorial elections coming up.

If you're in one of the 47 states without a legislative or gubernatorial race to volunteer for, check out what's going on in your city, county, or school district. Is someone running in support of a comprehensive curriculum that includes high-school-level gender studies? Are there gender-neutral toilets in every building in the district? Do city grants go to women-owned businesses? If no one is running with commitments on these issues, run yourself.

The other part of this actually reverts back to Washington, D.C. Once there are pro-equality candidates elected at the city or state level, they can organize their networks to help candidates further up the chain — be that by recruiting volunteers to knock on doors during a campaign or to organize protests and other actions that will build pressure. Of course, there's also that thing called redistricting that could help Democrats win the House if it were done fairly.

So don't get discouraged by the state of affairs in Washington. You can start making change locally. Pass progressive legislation instead, and make gender equality happen in a city or state near you.