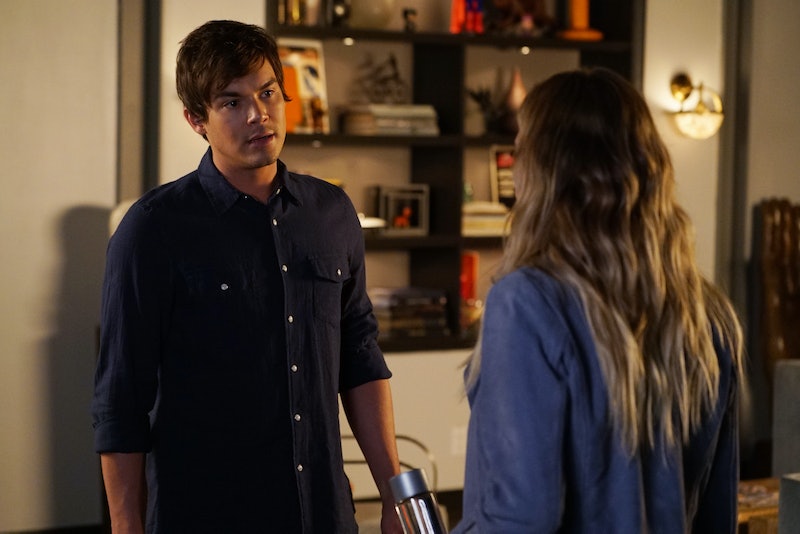 If you're a long-time viewer, you'll know there are a heck of a lot of twists and turns in Rosewood. So the discovery that, over the years, I. Marlene King has only given away one Pretty Little Liars spoiler by accident is pretty impressive. In a conversation with Entertainment Weekly, the four lead actors and King talked about the tricky business of keeping secrets from fans and press. Aside from the showrunner, everyone else claimed they'd made it through the entirety of the show without letting anything slip (at least, not in a way that the press would pick up on, but we'll get to that in a second).

King said, while gesturing at Ashley Benson, who plays Hanna:

“I’ve only let something slip one time and it was you in the orange jumpsuit... You came to a meeting in your orange jumpsuit and I lied because it was around Halloween. I said, ‘No no, we’re dressing up for Halloween,’ but fans knew. That’s the only time I’ve screwed up.”

The orange jumpsuit presumably refers to the outfits the Liars were dressed in at the beginning of the Season 5 finale "Welcome To The Dollhouse," when after Ali was found guilty of murder, Lieutenant Tanner books the other Liars, and we see them in orange jumpsuits on the way to prison.

Of course, it’s kind of a misleading spoiler since, on the way to prison, A manages to kidnap them from the van and take the Liars to their own specially-designed prison: a giant dollhouse. Since by the time they get out, Ali’s murder conviction is overturned (after the revelation that Mona is in fact alive), nobody has to go to prison. Which means actually this leaking must have worked out great in terms of audience surprise.

In the same interview, Troian Bellisario (Spencer) suggested that while she doesn’t spoiler by accident, she sometimes does it on purpose because nobody believes her:

“I feel like in the past I’ve definitely said the truth about some things because I knew people wouldn’t believe me. That was the best way to keep the secret — to bluntly say exactly what would happen and then say, ‘But can you ever trust me?’ And because I’ve been on a show with the word ‘liar’ in the title, nobody believed me! I think I said it about, like, Mona at one point.”

Hiding the truth in plain sight — sneaky. And funny, too, since it echoes what her character Spencer's strategy when it comes to trying to hide secrets on the show.

Remember when shortly after burying Archer Dunhill’s corpse, she goes to the hotel bar for a drink and runs into a handsome stranger who turns out to be Detective Marco Fury? When he asks her what she’s been doing on that evening, she tells him the truth straight out: “Burying a body.”

Looks like Bellisario and Spencer are even more similar than you might have suspected. Stay sneaky, Liars.