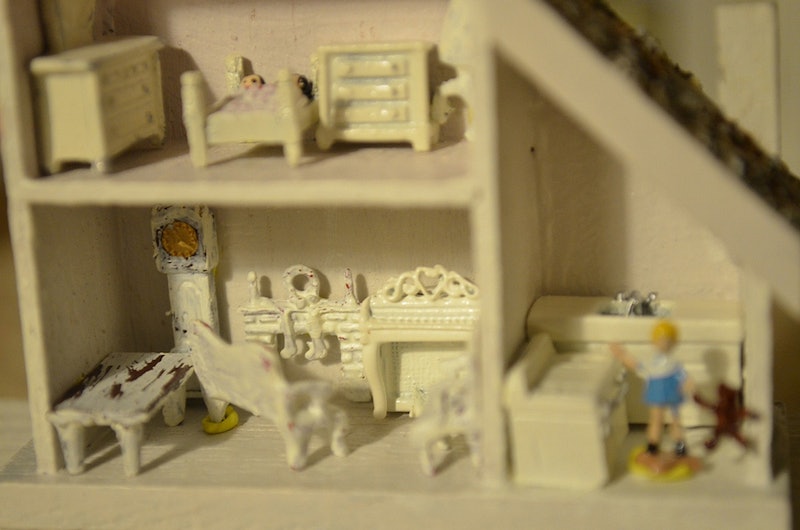 After all these years and texts and threats, Pretty Little Liars' Big A reveal is just hours away, and to say there are so many questions on fans' minds would be an understatement. Sure, theories about who A is have been swirling around like crazy, but there's something even more important that needs to be addressed: What is this Pretty Little Liars dollhouse, where is it located, and how did it even come to be in the first place? The promo for the Season 5 finale "Welcome to the Dollhouse" (below) tells a few things, but we'll have to work harder to get to the bottom of this.

It's important to remember that this isn't the first time we've seen a dollhouse on Pretty Little Liars: Mona was creepily into them and had a few of them in her room, and the whole motif of the liars being Ali's "dolls" has been around for a few seasons now, not to mention all the actual Liars-shaped dolls, masks, etc. that we've seen over five seasons. But this particular dollhouse that A seems to have constructed in order to be able to trap all of the girls in is an entirely different story.

Tumblr user prettylittleliarsdollhouse has a seriously feasible theory as to how the dollhouse was actually made, which, to be honest, wasn't even something I thought about. I mean, this is A we're talking about. He/she somehow has access to snakes, finger bones, Hanna's teeth — it really doesn't surprise me that he/she was able to build an entire structure without anyone batting an eye. But this construction theory could turn out to be important and it has a lot to do with Toby.

Remember back in Season 3, when Toby disappeared for a little while? (It was also around the time that Emily's mom worked in the police station, if that gives you any context.) Well, in one episode, Emily visits a workshop after receiving a text from "Toby" asking her to meet him there. When she arrives, she finds someone who claims to be Toby's co-worker who somehow knows her name (he never explains how he knows who she is) and seems to be working on building some kind of structure...

But Wait, Does This Prove Toby Is A?

The gist of this theory is based on the idea that the project that Emily walked in on back in Season 3 is actually the dollhouse in the making. If that's the case, then Toby is somehow directly connected to it, which begs the question: Is Toby Big A? His name has certainly been thrown in the suspect pool more than a few times, and given his history with Ali and the girls (don't forget The Jenna Thing from way back when), it wouldn't be entirely surprising. It's also important to remember that Keegan Allen told Bustle that the Big A reveal would be "heartbreakingly beautiful" — and the idea that Toby went through all of this trouble just to avenge his step-sister would certainly fall into the "heartbreakingly beautiful" category.

But if all this is true, then there are so many questions that the finale needs to answer for us. Where's the dollhouse geographically located? Is it wherever Toby disappeared to back in Season 3? Or is it in Rosewood, hiding in plain sight somehow? After all, they managed to build something in the workshop without anyone noticing, and I now need to know what it was.

Here's the thing about this theory: it's just a theory, but it would definitely explain a lot of Toby's minor plot points throughout the show. We knew he was a carpenter for a long time, but other than the light work he did on Spencer's house and the construction on his loft, we have no idea what he worked on or where it was. He would disappear for weeks at a time on "jobs." He joined the police force abruptly under the guise of protecting Spencer and and fighting corruption in the force, but at the same time, he abandoned carpentry work just as abruptly. Could it have been because the dollhouse was constructed and his work was done?

This theory gives us such neat answers for all of the questions swirling around Toby that it's hard not to believe that he's Big A.