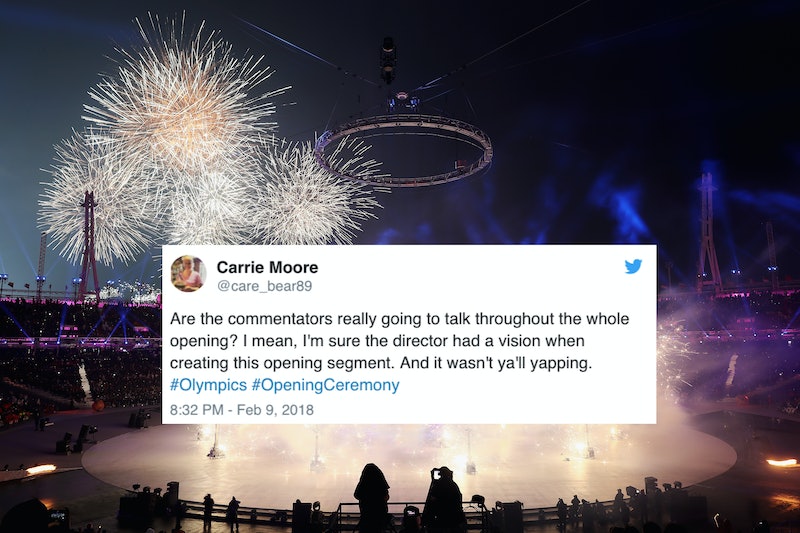 If you were on Twitter tonight during PyeongChang 2018 Olympic Winter Games opening ceremony, you probably noticed a recurring theme — and for once, it wasn't a meme. A lot of people thought there was too much commentary during the Olympics opening ceremony from NBC's coverage of the event. Many took to Twitter to voice their distaste for the commentary from U.S. reporters Katie Couric, Mike Tirico, and Joshua Cooper Ramo, the hosts who covered the opening ceremony for NBC.

Unlike watching the coverage in real time, NBC airs a modified, pre-taped version of the show, a lot more of which is commented on by the hosts. And admittedly, it's a hard line to toe — on one hand, many people are eager to experience the ceremonies without interference, leaving the art up to their own interpretation and letting the story be told the way the choreographers designed it; and on the other hand, there can be a lot of confusion regarding cultural norms that might lessen the appreciation of something if it isn't explained.

Some, though, are decidedly in the camp against the commentary, and even went to extreme lengths to avoid it. "If you're wondering why so many people got up to watch the opening ceremonies at 6 a.m., it's because this morning, they didn't have the super western-centric super white commentary," wrote Twitter user @HannahWithHockey, in the midst of people complaining during Friday night's coverage.

And complain, they certainly did.

2. Because, It's More Fun To Be Annoyed AF Together

4. It's Just As Bad As Talking Through A Movie

6. And They Want To Experience It For Themselves

8. Even Though They'll Never Get Those Two Hours Back

9. Art is Contemplative & Needs No Commentary

11. Never Talk While Someone Is Singing

14. But, Somehow They Got Through It

15. Even Though They Interrupted The Drumming

If the commentary drove you bananas, Nick Schwartz from USA Today also suggested planning ahead to get up early for the next Olympics. "It may be a pain to sacrifice sleep, especially if you live on the West Coast, but the show is so much better. You don’t have to deal with commercials or announcers providing useless trivia all night, and you get to see the artistic performances as they were meant to be seen," Schwartz wrote.

He added that Tirico, who has taken the Olympic-hosting reigns from veteran reporter Bob Costas, noted that a commentary-free version will be available Sat. Feb. 10 on NBCOlympics.com. So, the good news is that, if the nonstop chatter sullied your Olympic experience, you'll get another chance to experience it again for the first time.

If you are into all of the extras, you can get even more involved on the NBC Sports app to get more information about the athletes, the ceremony, the Olympic Village, and even fun trivia. The experience isn't just limited to your television; according to NBC, you'll be able to enjoy "[e]nhanced streaming experiences will be available for all primetime show simulstreams, as well as all figure skating and Alpine skiing event streams on NBCOlympics.com and the NBC Sports app."

In the meantime, people can appreciate the usefulness of some of the contextual knowledge everyone got from their hosts tonight — and that in the future, if they'd rather not have it, there are plenty of alternative viewing options so that everyone can live their best Olympic spectating life.