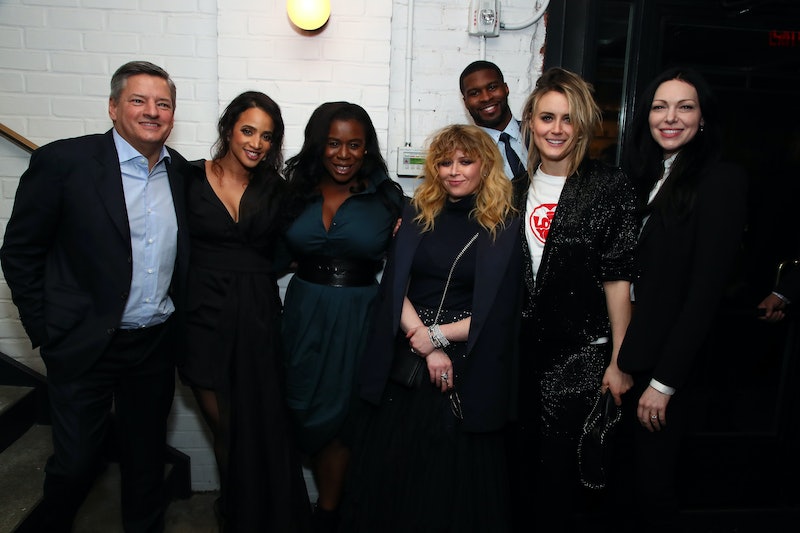 The women at Litchfield prison are finally getting out — the actors, anyway. But, it turns out, leaving a fictional prison is bittersweet. The Orange is the New Black cast wrapped the series finale on Tuesday, Feb. 27, and various members of the cast members and crew have been sharing behind-the-scenes snapshots on social media as they finish their seventh and final season. And there's definitely no shortage of emotion.

Creator and showrunner Jenji Kohan posted a photo on her Instagram of what looks like the entire cast and crew on Tuesday. “This is a family,” she wrote in the caption. She followed it up with a picture of a (teary) Taystee, played by Danielle Brooks, holding up a sign saying, “That’s a wrap!” Kohan also showed off some great cupcakes with the OITNB logo on them, because if you're emotional, you definitely need some treats. And Kohan wasn't the only one who took to Instagram to pay tribute to their OITNB family.

On her own Instagram story, Brooks posted a video of herself in the car on the way to filming her final day, saying, “So today is it...." She let out a deep breath before continuing: "And ironically, I have a fever of 101.6. I'm not kidding either. I think your body knows when its time to rest it up, you know?"

Laura Prepon, who played Alex for seven years on the show, had been sharing throwback photos all week, leading up to her last day of filming. She shared a behind the scenes pic of her directing an episode this season. She also posted a throwback photo from Season 1's costume testing, featuring her character with short, black Betty bangs, writing in the caption: “#ThrowbackThursday to an Alex look that we tried out during season one of #OITNB. It didn’t make it in, but we had fun doing it. Nearing the series wrap—feeling nostalgic!”

Natasha Lyonne, who played the fan favorite Nicky, and who's now the star of another runaway Netflix hit, Russian Doll, shared some sweet pictures of the cast. She posted one photo of herself with fellow cast member Uzo Aduba in Halloween costumes. And another of herself and Dascha Polanco (Daya) on a filming break with their pups. "We were Dogwalking each other long before @iamcardib so wisely suggested it," she wrote. In a caption on another photoset, Lyonne said: "On the last shot, a guttural sound came out of me, like some wounded animal."

Taylor Schilling, who was Piper for seven seasons, shared a sweet goodbye note to the series on her own Instagram post. "OITNB series wrap! WHOA. My heart is full and achey and so overflowing with gratitude I’m a little dizzy," she wrote under a video posted from set, tagging just about all of her fellow castmates in her post. Meanwhile, the real Piper Kerman posted a video of her last day walk through the set.

Perhaps the best caption came from Lea DeLaria, who played Big Boo: she shared some of her favorite memories from her time on the show, saying in her caption: "Thank you @oitnb for making me the #lordofthelesbians."

Netflix announced in October that Season 7 of OITNB would be its last in a video on their official Twitter account. It featured several of the show's cast members thanking the fans for watching along, and confirming that the final season would air in 2019 (though there is still no release date for Season 7).

Though they have held plot details about Season 7 close to the chest, Danielle Brooks did tweet that the script for the penultimate episode "f**cked me up." Heart tugging last day Instagram posts side, it's going to be one hell of an emotional last season at Litchfield Prison.

More like this
Does 'Locke & Key’s Ending Mean There Could Be A Season 4?
By Sophia Moore
'The Sandman’s Ending Is A Departure From Neil Gaiman’s Comic Book Series
By Kadin Burnett
Everything To Know About The Sandman Season 2
By Kadin Burnett
Reese Witherspoon Got Hooked On ‘Never Have I Ever’ After Son Deacon’s Debut
By Stephanie Topacio Long
Get Even More From Bustle — Sign Up For The Newsletter