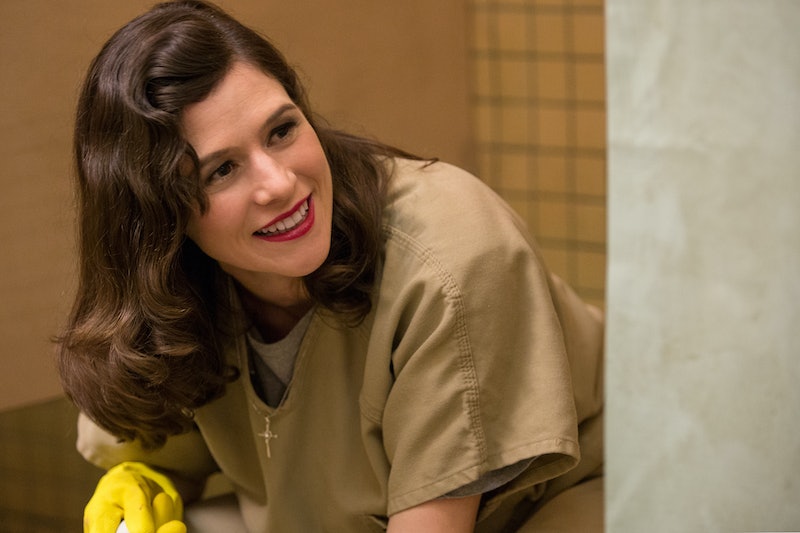 After the trauma that was last year's Orange is the New Black finale, we're going to need a little reprieve before diving back into the world of Litchfield for another season. Luckily, that's here in the form of the Orange is the New Black Season 4 bloopers, debuted here ahead of the May 9 release of the season on Blu-ray and DVD. While the comedy has some seriously stressful and poignant moments, it is still a television show, and the goofs are bound to happen.

Whether it's a technical difficulty, some side commentary, or spilled wine, the gag reel is full of humanizing moments for the entire Orange crew. You'll see Taylor Schilling, Lea DeLaria, Danielle Brooks, Uzo Aduba, Samira Wiley, Yael Stone, Nick Sandow, and Alysia Reiner getting flubbed or caught in a moment. It's not a show that lends itself to improvisation, so there aren't a ton of bloopers. I'm fine with that, particularly because Jenji Kohan is one of the best writers in the business, but a little lightness is always appreciated.

We all need to laugh, even the cast of Orange is the New Black. They're friends! Nobody can resist having fun with their friends at work. Watch below.

That said, I still can't wait for Season 5. Just this little snippet of new Orange content has already got me wanting more.