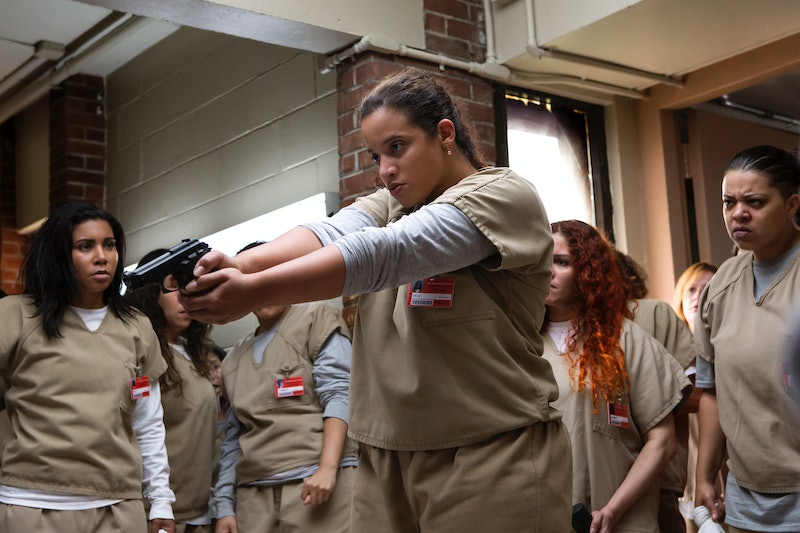 When we last left the prisoners at Litchfield prison, tensions were high. Now a new clip from Orange In The New Black Season 5 picks up right where the last season left off, with Daya holding the gun. So how did we get here? After — spoiler alert — Poussey's death at the hands of an inexperienced new guard, the prisoners decided to rise up, taking matters into their own hands. When a guard drops his gun during a standoff with the women, Daya picks it up and points it at him, earning cheers from her fellow inmates, who have found a common enemy that, for once, isn't one another. But if you have the power, does that mean you should use it? That's the dilemma Daya is now facing in this clip.

Daya, who has always been protective of her prison family, is left with two decisions, neither of which will make her stay in prison easy. She can shoot the guard and lose any chance of ever getting back the daughter she had to give up. Or she can put down the gun and lose the respect of her inmates, who will surely make her pay for not forcing the prison to take responsibility for its actions. It's an impossible choice, and Daya knows it. So does Netflix, which is likely why the new season has been given the tagline, "It's about to get real."

With each close-up of Daya's face we see her trying to figure out the best course of action. Her nerves are wavering, and the gun is doing the same. "Be quiet," Daya starts shouting, closing her eyes to try and block everyone out. And then there's the tense way that the scene ends, which makes it clear that Season 5 of Orange Is The New Black, which takes place over the course of three days, is going to start with a bang. But will it end with another death?

That's just one of the questions you're probably asking yourself after watching this teaser and you'll have some time to think it over, too. Orange Is The New Black returns to Netflix on June 9.

More like this
'The Last Of Us' Episode Schedule Competes With The Super Bowl & Oscars
By Brad Witter
'The Last Of Us' Episode 4 Put Twitter Into An Emotional Spiral
By Alyssa Lapid
Grammys Host Trevor Noah Made Adele's Dream Of Meeting The Rock Come True
By Brad Witter
Pedro Pascal Barely Got Through The "Lisa From Temecula" 'SNL' Sketch
By Stephanie Topacio Long
Get Even More From Bustle — Sign Up For The Newsletter
From hair trends to relationship advice, our daily newsletter has everything you need to sound like a person who’s on TikTok, even if you aren’t.