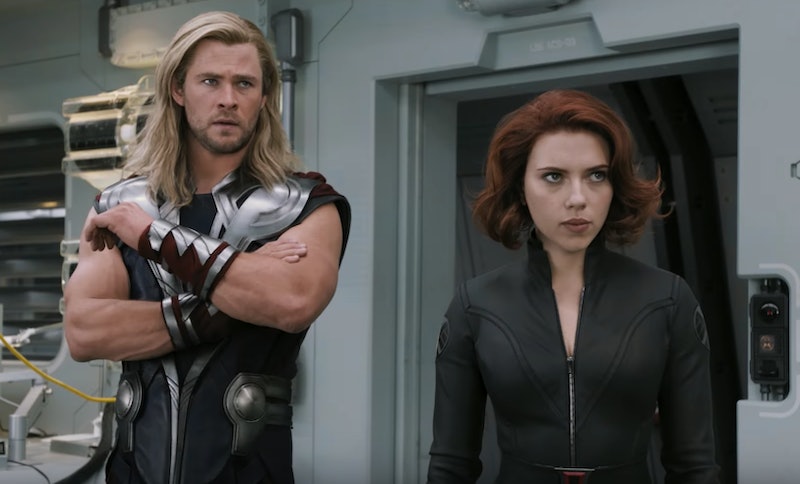 One major movie truth is that you can almost always bet that an exciting new Marvel movie is scheduled for the future. Even though Avengers: Infinity War might seem to be indicating the beginning of the end of Marvel's third phase, that doesn't mean the whole cinematic universe will soon end. Au contraire, because if you look at the order of the new Marvel movies after Infinity War, you'll quickly realize that the MCU is really just getting started. In fact, after Infinity War comes out on April 27, you won't even have to wait long for another Marvel movie, because on May 18, Deadpool 2 comes out.

The Ryan Reynolds-starring superhero movie isn't the last Marvel movie of the summer, either. On July 6, Ant-Man and the Wasp will get released, proving that the MCU knows how much everyone depends on a constant flow of Marvel movies to get them through the days. Beyond the Ant-Man sequel, the studio has a whole schedule of upcoming films planned well into 2020, as Time reports.

As mentioned before, Infinity War marks the transition to the end of Marvel's three phases. Phase One included the movies: Captain America: The First Avenger, Iron Man, The Incredible Hulk, Thor, and The Avengers, as Digital Spy reports. Phase One ended in 2012. Then, Phase Two introduced more characters, but it focused less on origin stories — which Phase One did — and more on the MCU as a whole. Those films included Thor: The Dark World, Captain America: The Winter Soldier, Guardians of the Galaxy, Avengers: Age of Ultron, and Ant Man, according to Digital Spy.

If nothing else, the films of Phase Two revealed how vast the MCU really was, and it introduced viewers to a few new characters. Phase Three began with 2016's Captain America: Civil War, and Collider reports that it will end with the secretly-titled Avengers 4 movie. With the end of Phase Three, you can expect to see fewer movies involving the original Avengers (Iron Man, Captain America, Hulk, Nick Fury, Loki, Black Widow, and Hawkeye) all together. That doesn't mean it's the last time you'll see the Avengers, but the group could face some big changes.

The movies already slated beyond Avengers 4 give you a preview into some new characters that Phase Four will introduce. First, there's Gambit, who Channing Tatum will play, Den of Geek reports. Then, The New Mutants will also present a new group of character from the X-Men universe. Additionally, Feige recently told The Wrap that Marvel Studios has started to work on adding The Eternals to the MCU. "Eternals is one of many many many things that we are actively beginning to have creative discussions about to see if we believe in them enough to put them on a slate," he said.

If nothing else, you can bet that the future of the MCU will only continue to grow, and it might even include drastic changes that you can't even imagine. In an interview with io9, Feige said, "I don’t think we’ll ever leave our past behind necessarily, but I think the new elements and the new inroads and, by the way, places that we haven’t explored yet from the comic universe, will become more and more at the forefront.” It sounds like everyone has a lot to look forward to from the future of Marvel, which is great news at a time when most aspects about the future seem incredibly uncertain.