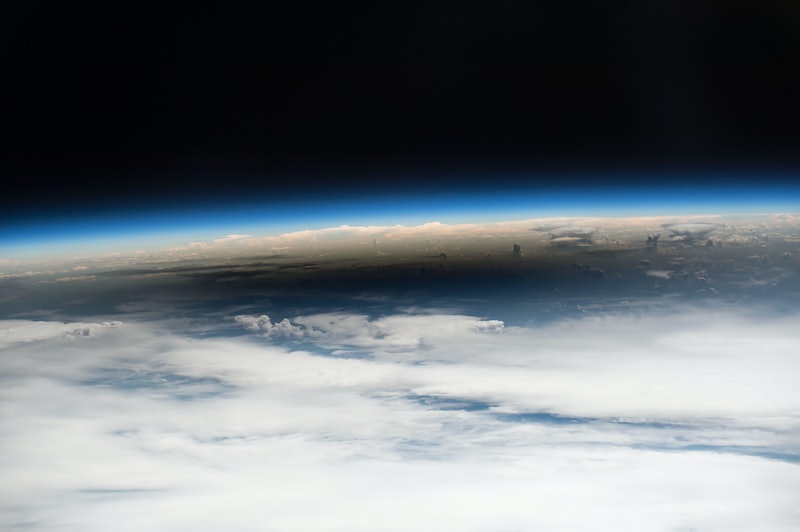 In case you needed some good news today, according to a recent United Nations (UN) report, the Earth’s ozone layer is healing, and could be totally closed up in the next 30 years. “Actions taken under the Montreal Protocol have led to decreases in the atmospheric abundance of controlled ozone-depleting substances (ODSs) and the start of the recovery of the stratospheric ozone,” the report states. Which is a super encouraging example of what’s possible when people work together on a global scale for positive change.

CNN reports that these ozone-depleting substances, called chlorofluorocarbons (CFCs), were identified more that 30 years ago as the main reason why the Earth’s fragile ozone layer was sustaining massive damage. (That's that "hole in the ozone" you keep hearing about.) The ozone layer is a delicate layer of gas that surrounds the planet, and it protects all life forms from potentially damaging ultraviolet (UV) rays from the sun. A damaged ozone layer means that more UV rays can penetrate the Earth’s atmosphere, leading to higher rates of skin cancer and other diseases in humans. In years past, CFCs were primarily found in aerosol products, refrigerators, and dry-cleaning chemicals, according to CNN. When scientists discovered the damage being done to the ozone layer in the 1980s by CFCs, the substances were globally banned under the Montreal Protocol.

“It’s really good news,” report co-chairman Paul Newman, chief Earth scientist at NASA’s Goddard Space Flight Center, told NBC News. “If ozone-decreasing substances had continued to increase, we would have seen huge effects. We stopped that.” As a result of international cooperation under the Montreal Protocol established in 1987, the ozone layer over the Northern Hemisphere should be completely healed by the 2030s, and the hole above Antarctica should disappear by the 2060s, NBC News reports.

“The Antarctic ozone hole is recovering, while continuing to occur every year. As a result of the Montreal Protocol, much more severe ozone depletion in the polar regions has been avoided. Outside the polar regions, upper stratospheric ozone has increased by one to three percent per decade since 2000,” the UN report states.

The UN report, which is updated every four years, has been keeping tabs on the ozone problem for decades. Gizmodo notes that while more work is needed to keep global ozone recovery efforts on track, this report signals major progress. “We’re at the turnaround point,” Newman told Gizmodo. Gizmodo writes that, in order to ensure that ozone recovery is fully achieved, global efforts to curb the use of ozone depleting substances must continue.

Despite the UN’s findings, scientists warn that there has been a mysterious uptick in CFC emissions in recent years, according to CNN. If the source of the emissions can be identified and stopped, the damage should be minor. However, if the recent surge in CFC emissions is not contained, it could delay overall healing for the ozone layer. According to Gizmodo, global communities and leaders need to keep up their efforts to eliminate CFC emissions, in order to keep the ozone recovery process on course.

More like this
Why Experts Say Sleeping With A Fan On Isn’t Totally Risk-Free
By Sophie McEvoy
The 6 Best UV Umbrellas, According To A Dermatologist
By Rachael Green
The 8 Best Indoor Door Mats For Your Home
By Jenny White
Dunkin’s Pumpkin Spice Latte Is Officially Back This Week
By Mia Mercado
Get Even More From Bustle — Sign Up For The Newsletter