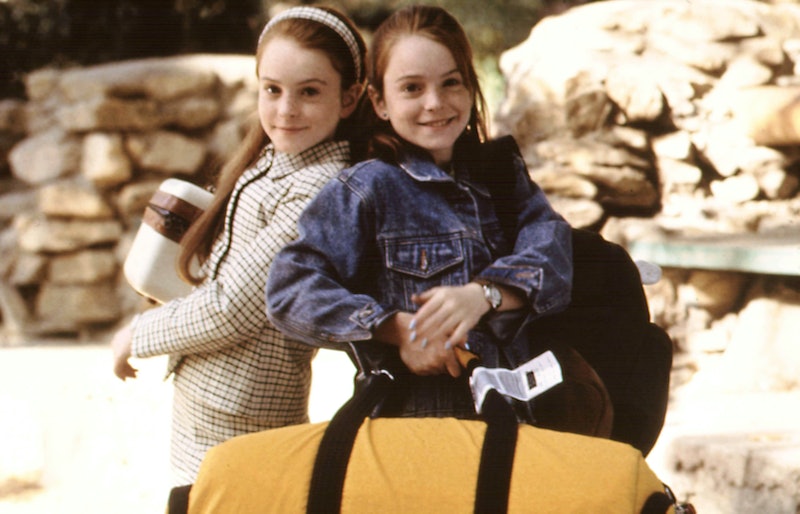 Moviestore Collection/Shutterstock
By Aoife Hanna
May 21, 2020

There is nothing quite as disappointing as rewatching a classic film from childhood only to realise it was, well, crap. Or worse still, that it's aged badly. Luckily for fans of The Parent Trap, neither of these descriptions apply. You might even say it's aged well, like the fine wines that you're enjoying a whole bunch of late. So what if I said that director Nancy Meyers hinted at a potential reunion of The Parent Trap?

Yes, it took my breath away too, it seems like we should be braced for something magical. Doubly magical, if you will, because the second most famous twins of all time (close second to Romulus and Remus) might be getting back in the biz. Before you do a spit take and scream "SEQUEL?!", while reaching for both the Oreos and the peanut butter (™ Hallie and Annie), it's definitely not a sequel.

Meyers, who directed the Disney classic, shared a picture of her and Lindsay Lohan on set during the making of Parent Trap back in 1998. The picture's caption was a total tease: "I have some #ParentTrap news to share next week," she said. Adding "#ItsGoingToBeFun. (Not a sequel. Sorry!)"

What the heck does this mean? A reboot? A prequel? Or is it just a darn Zoom call and all this fuss has been for nothing?

Meyers' Midas touch is all over some of your film favourites, including the likes of It's Complicated, The Intern, and The Holiday. Her Instagram is filled with never-before-seen BTS photos of some of her most famous movies, too. If that's not enough, she also shares cool Easter eggs, like the fact that her daughters – who the main characters in The Parent Trap are called after – feature as extras in the movie.

But as for this reunion business, we'll have to keep an eye on her IG for the big reveal. But something tells me it's going to be pretty great...