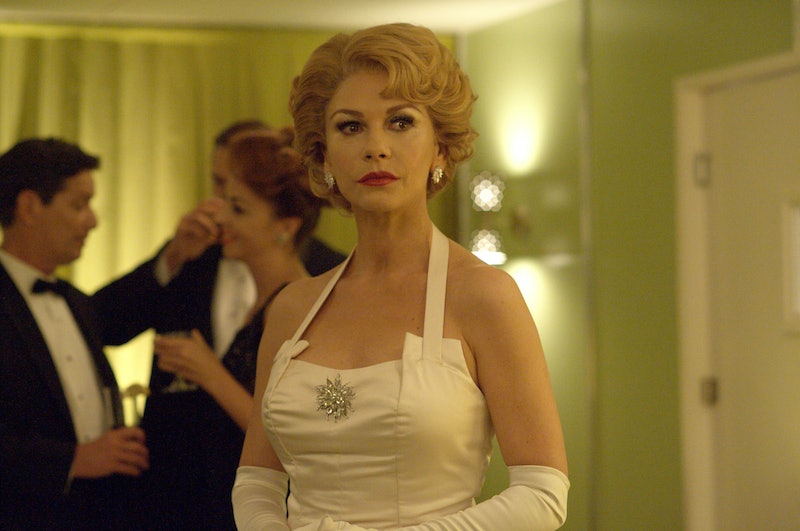 If a feud falls in a forest and no one is around to confirm it, does it really happen? That's the question you might ask when you see Olivia de Havilland in Feud deny that she ever had a bad relationship with her sister. While the drama between Joan Crawford and Bette Davis is fairly on the record, Feud shows how de Havilland has stayed mum over the years when it came to reports that she did not get along with her sister, fellow actor Joan Fontaine. In the April 2 episode, "And the Winner Is... (The Oscars of 1963)," Catherine Zeta-Jones' de Havilland is asked about a photo from the 1947 Oscars in which she appears to rebuff her sister. The fictional Havilland denies that any bad blood is shown in the photo, but you can interpret for yourself what's occurring between the sisters in the snap.

Film critic Tim Robey outlined for the Telegraph the story behind the Oscars photo that was referenced in Feud. At the Oscars in 1947 (Robey mistakenly wrote "the Oscars in 1946"), which honored the best films of 1946, de Havilland won Best Actress for To Each His Own. The sisters had both been up for Best Actress in 1942, but Fontaine had won it over her older sister for her role in Suspicion. Yet Scott Feinberg for the Hollywood Reporter noted that wasn't necessarily the reason de Havilland allegedly gave Fontaine the cold shoulder after she won her own statuette in 1947. Besides having a contentious relationship as siblings, Feinberg credited the tension of the 1947 Oscars to Fontaine allegedly saying something rude about de Havilland's first husband, Marcus Goodrich.

No matter the reason, this Oscars backstage moment was captured for posterity and for speculation:

Robey wrote that de Havilland was quoted as saying to a reporter after the 1947 Oscars that her relations with her sister "have been quite strained for some time... I couldn't change my attitude." Feinberg noted that her publicist Henry C. Rogers (who worked with Crawford as well) told the press afterward, "The girls haven't spoken to each other for four months. Miss de Havilland had no wish to have her picture taken with her sister. This goes back for years and years, ever since they were kids — a case of two sisters who don't have a great deal in common."

Even if de Havilland wasn't purposefully ignoring Fontaine's congratulatory remark, that's the story Fontaine told, according to Vanity Fair. Feud shows de Havilland still being asked about this moment in 1978, and it's proof that the media continued — or, more accurately, continues — to be fascinated by this feud between famous sisters. As de Havilland is still alive at the age of 100 (Fontaine died only a few years ago), she could set the record straight on what exactly happened during the 1947 Oscars. But based on de Havilland's relative silence on the subject of her sister for most of her long life, don't hold your breath.

More like this
Another Side Of Rupert Grint
By Maria Sherman
Pamela Anderson’s Dating & Marriage History Could Be Its Own TV Series
By Jake Viswanath
Jennifer Coolidge Hunted For Jewels & Lashes In J.Lo’s Hotel Room
By Jake Viswanath
Keke Palmer Shares The Sex Of Her & Darius Jackson's Baby
By Jake Viswanath
Get Even More From Bustle — Sign Up For The Newsletter
From hair trends to relationship advice, our daily newsletter has everything you need to sound like a person who’s on TikTok, even if you aren’t.