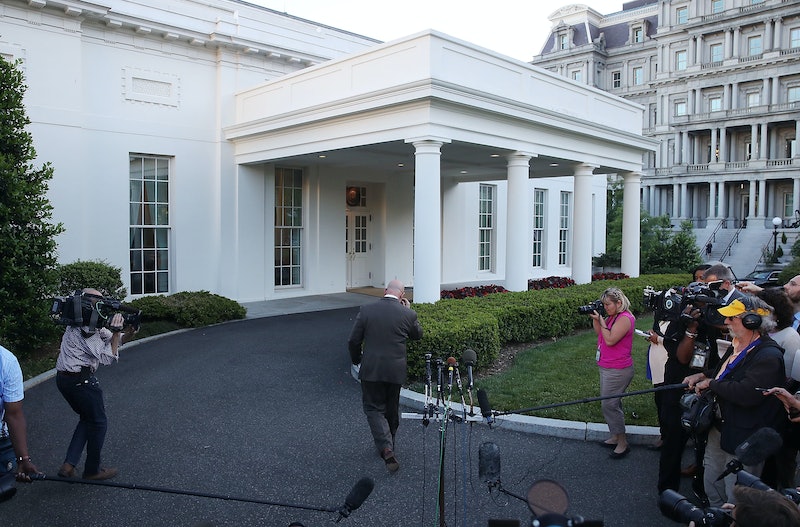 You won't find any pictures from American news media of what's possibly the biggest story to roil Trump's White House, at least thus far. That's because last week, American photographers and journalists weren't allowed in the room when President Donald Trump met with Russian Foreign Minister Sergey Lavrov and Russian Ambassador to the United States, Sergey Kislyak. Only Russian media made the cut. That seemed curious at the time, but now that we know what Trump and company were reportedly talking about, it's all the more curious. This photo of Trump with the Russian minister and ambassador is quite the sad, scary meme.

You'd almost think that the White House was trying to prank the country, given all the fodder they've provided just this past week with regards to potential collusion between Trump associates and Russia. First, there was the decision to fire James Comey, the person overseeing the investigation. Then there was the meeting with the Russians the next day. Then, the focus jumped back to the Comey firing, with Trump admitting he let the FBI director go because of the Russia investigation. Now, jumping back to that Russia meeting, we've learned that Trump shared things that he probably shouldn't have.

And that makes it all the more interesting that American media wasn't allowed to capture the moment. Both the Russian Embassy and the Russian TASS news agency released pictures of the three smiling in the Oval Office. This oddity was covered in the media at the time, with many experts noting that this was a PR coup for the Kremlin at best, and possibly even a security risk.

The New York Times reported a Twitter conversation between Colin Kahl, a national security adviser to former vice president Joe Biden, and David Cohen, Obama's former deputy director of the C.I.A. "Was it a good idea to let a Russian gov photographer & all their equipment into the Oval Office?" Kahl asked, noting it's a "deadly serious" question. Cohen responded, "No, it was not."

Part of the concern was that the Russians could have gone so far as to plant listening devices in the office — though that doesn't seem to be even necessary, given that Trump is allegedly passing out the secrets willy-nilly. Of course, there are different versions from Trump and his team: National Security Advisor H.R. McMaster told reporters at the White House Monday that things didn't happen as the news media reported.

Trump then contradicted McMaster in a tweet early Tuesday that he had the right to share the information. "As President I wanted to share with Russia (at an openly scheduled W.H. meeting) which I have the absolute right to do, facts pertaining to terrorism and airline flight safety. Humanitarian reasons, plus I want Russia to greatly step up their fight against ISIS & terrorism," Trump wrote.

If Trump's in the right, why didn't he or the White House want American media to capture the exchange? The decision to lock out reporters was curious at best before this news came out — now, it's downright problematic.