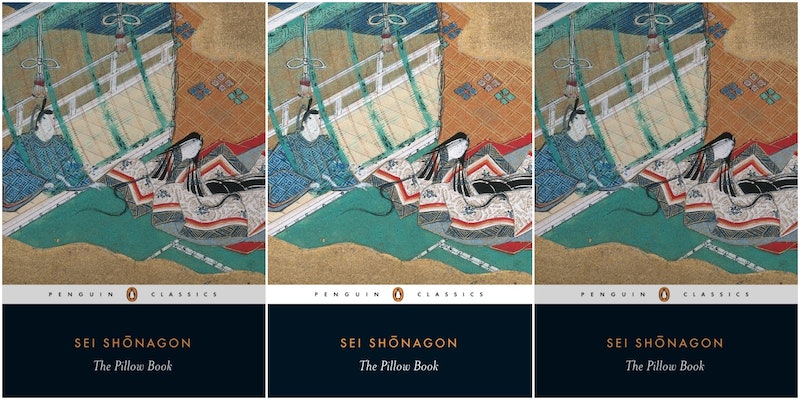 Before there was Twitter, before there was even such a thing as a gossip column or Dorothy Parker or widespread literacy, there was The Pillow Book by Sei Shōnagon. Sei lived around the year 1000, in modern day Kyōto, Japan, and she was, by all accounts, one brassy broad. Everyone on Earth must now immediately drop everything they are doing and read her Pillow Book. It's one part diary, one part witty observations, one part gossip column, and a whole lot of lists with no particular purpose— so, essentially, a blog.

Sei's 11th Century blog is remarkable for the way in which it records the ins and outs of daily life in Japan of the year 1000, but really, the main appeal of The Pillow Book is that Sei is a hilarious, drama-loving queen. She's witty. She's petty. According to Murasaki, Sei's rival lady poet at court, Sei was "dreadfully conceited" and "thought herself so clever." While Murasaki was writing The Tale of Genji, an epic novel about a noble prince, Sei was writing about the latest drama with the palace cat. And yet somehow, over a thousand years later, Sei's musings on dating and fashion and minor annoyances are still all too relevant to modern readers. So here are just a few of Sei's thoughts, to remind you that witty blogging springs eternal: