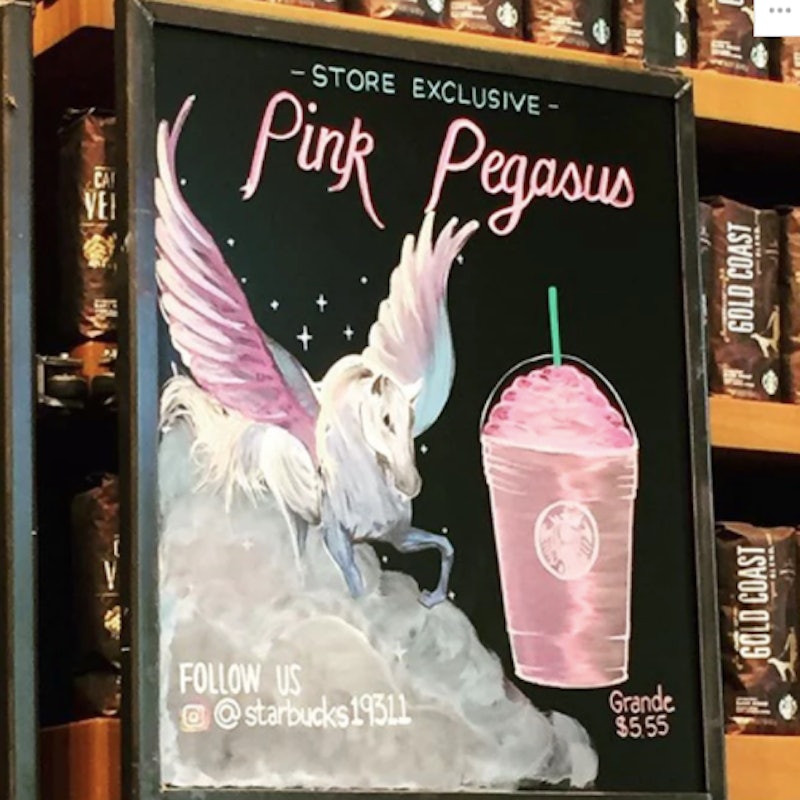 Dry your sparkly, rainbow-colored tears, everyone, for although the Unicorn Frappuccino is over, the Pink Pegasus Frappuccino at Starbucks has stepped up to take its place in the Magic Frapp Hall Of Fame. This variation of the OG fictional horse beverage is a bright pink concoction reminiscent of its predecessor — and since there is only one true Pegasus, it fittingly is only available in one Starbucks location. Even more fittingly, that location also happens to be the most ~magical place on Earth~. If you happen to be flying on a rainbow past Downtown Disneyland in Anaheim, California, you, too, can experience the majesty that is this new variation of frapp.

The Pink Pegasus Frappuccino wasn't just inspired by magic, but thriftiness. Although a lot of Starbucks locations ran out of supplies for the Unicorn Frapp before the promotional period was over (as they warned could happen when it was first released), plenty of stores have extra. This location in particular is still using the pink powder, essentially making a raspberry version of the Unicorn Frappuccino without the sour blue drizzle or the color-changing, flavor-changing bonanza. Instead it looks like this straight up majestic beast, which is perhaps the most iconic use of Millennial Pink to date.

According to one customer, the Pink Pegasus Frappuccino consists of white mocha with raspberry syrup and pink powder (give it to meeeee). But this is far from the only innovation that baristas have thought up with leftover unicorn supplies; yesterday, the concept of "Unicorn Lemonade" went viral, using the pink and blue powders to create an awesome ombre effect with the use of ice, lemonade, and iced tea.

In any case, the Pink Pegasus Frappuccino is most welcome to the "weird drinks named after horses, because OK, 2017" family.

Might I suggest a centaur frapp next, just to keep in theme with mythical, four-legged beasts? Maybe it can be half-frap, half-lemonade in true centaur-esque form, and turn into a slushie? OK, OK, I'll keep my day job.

In the meantime, if you have a hankering for the Pink Pegasus Frapp, it's still pretty easy to order for flavor even if not for Instagram — although it may lack the distinct pinkness, you can ask your barista for a White Mocha Frappuccino with raspberry syrup. If you're feeling extra ambitious, buy some food dye and dye it yourself — or ask for strawberries mixed in just to see what happens. Follow your own magical horse bliss.

More like this
TikTok's Butter Board Might Be The New Cheese Plate
By Emma Carey
On TikTok, Tinned Fish Date Night Is The Latest Viral Food Obsession
By Emma Carey
10 Pumpkin Recipes That Are Way More Creative Than Pie & Lattes
By Rebecca Deczynski and Alexis Morillo
Deliveroo Is Selling Lotus Biscoff Cinnabons Now
By Darshita Goyal
Get Even More From Bustle — Sign Up For The Newsletter