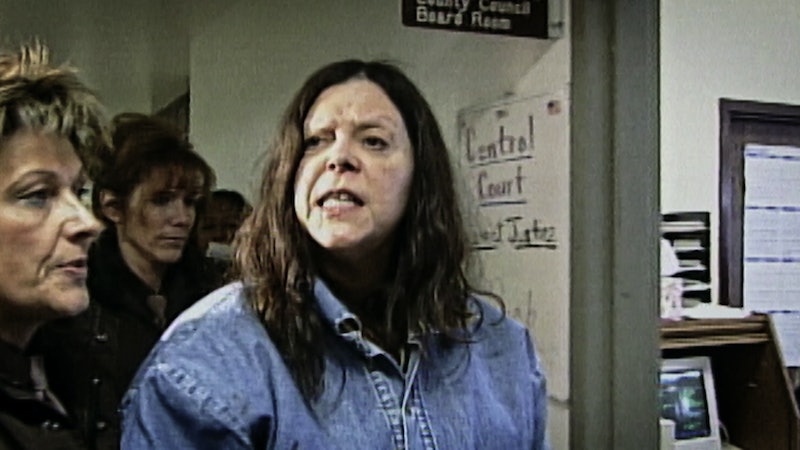 The true crime market is crowded these days. It seems like every week a new investigative podcast drops, HBO begins promoting their latest crime documentary, and Netflix series likeWild Wild Country dominate water cooler discussions for weeks. But the latest addition to Netflix's expansive true crime collection, the true crime docuseries Evil Genius, provides a unique take on the genre, and covers a case that viewers will be thinking about long after the screen goes dark.

"I started tracking the case the day it happened," Trey Borzillieri, one of two co-directors involved in the project, tells Bustle over the phone of his history with the bizarre bank heist at the center of the documentary. Borzillieri was in Buffalo, New York when he first heard that a PNC bank in Erie, Pennsylvania had been robbed by Brian Wells. As more details began to surface, and it became apparent that this was no ordinary bank heist, Borzillieri decided to get in on the action.

"It was August of 2003 when Brian Wells robbed the PNC bank, and soon after information began to trickle out that there was information at the scene which indicated that Wells was put up to do the robbery, that he was forced," he shares. "And soon after that the authorities had found a frozen body right next to the dirt road where Brian Wells made his final pizza delivery. And at that time the FBI was saying that they were not connected, and that was just shocking to me. And from that moment I went to Erie and started doing interviews and making this documentary."

The fact that Evil Genius is a project about 15 years in the making is part of what makes the series so unique. Unlike other documentaries, which often take a look back on cases that have already been investigated, Borzillieri, and later his directorial partner Barbara Schroeder, followed and documented the twists and turns of the case in real time. Filming a documentary this way was challenging, but the results were worth it.

"Whenever I would speak to someone who had made a documentary before they were like what are you doing, this is insane. You don’t do this," Borzillieri says. "But that is what drew me to it. It was trying to create something from the start where the end product could be a participatory journey for the audience. And I hope and I feel like that’s what you’re getting with this series. And so it’s very unique in that way, and it gave me unique perspective on the case."

Evil Genius presents a case that is almost inexplicably bizarre, filled with unexpected twists and confounding characters. As WIRED reported, what kicks off the action is the 2003 PNC bank robbery, in which 46-year-old pizza delivery man Brian Wells entered the building with a collar bomb around his neck and a loaded cane gun in his hand. He passed the bank teller a note which demanded he be given $250,000, though he only ended up leaving with $8,702 in cash, and drove away before being caught by state troopers about fifteen minutes later, per WIRED. The troopers surrounded him, handcuffed him, and backed away after he informed them that the bomb strapped to his body was going to go off. The bomb squad was called, but they didn't make it in time. The bomb began to emit a beeping noise and as Wells scooted back, panicked, it detonated, killing the pizza delivery man. The entire event was caught on camera and is shown in Evil Genius.

As seen in Evil Genius, investigators dug into Wells' death and they found a series of handwritten notes directing Wells on a kind of deadly scavenger hunt around Erie. Just when it seemed that case couldn't get any more strange, a man named Bill Rothstein called 911, claiming that the dead body of James Roden was in the freezer of his house, a house that was just down the road from the location where Wells had made his last delivery, and presumably where the bomb had been attached to him, per WIRED. It was this new detail, and the trail of evidence that ultimately led to a woman named Marjorie Diehl-Armstrong, that got Borzillieri hooked on the case.

"[Borzillieri] approached me in 2013, so about five years ago. He had all of this great information and great details and videotapes and police evidence of hoarder’s homes that were being investigated for evidence, and as he started talking to me I had a lot of, I call them, 'wait, what?' moments," co-director Barbara Schroeder tells Bustle. “'Wait, what happened, and then what happened?' Because I had heard of the case, I was vaguely familiar with it, but I always wondered like, 'what ever happened in that case?' Man, did a lot happen."

Since Borzillieri had been following and documenting the case from the very beginning, he was able to get unprecedented access to many of the key players in this bank heist, especially Diehl-Armstrong, who was eventually charged and convicted to life in prison for her role in the bombing, according to CNN. (She maintained her innocence until her death.)

Prior to all that, though, Borzillieri had been interviewing Diehl-Armstrong for years. "In 2004 was when I sort of began knocking on doors, and once I began corresponding with Marjorie, she hadn’t been labeled a suspect publicly yet. So it was a unique perspective, it was like one of the remaining people who was alive in this case. So the relationship began there, and then, obviously there were many seasons that you will see in the series of our relationship, but it was because I started with her so early I was like a sounding board to her," Borzillieri shares. "And I just listened to her for a very long time in the hopes that at some point all of that would pay off and it would come to reveal the truth behind the case." Schroeder says that the team was able to acquire the first-ever on-camera interview with Diehl-Armstrong, and it is this access to the conspirators in the case that makes Evil Genius so unique, and so compelling.

"We have access to Majorie because of Trey, and you get to hear her and experience how she manipulates people," Schroeder says. "This is a woman who was devious, who was deadly, who put men under her spell, who got men to do her bidding, and her past is littered with dead boyfriends and husbands and there’s not a character like this in all my years of journalism. So it was really kind of entertaining to watch her manipulate."

Diehl-Armstrong's suspected involvement in the deaths of Brian Wells and James Roden was hardly the first time she had been viewed with suspicion by law enforcement. According to WIRED, Diehl-Armstrong was accused of murdering her boyfriend, Robert Thomas, in 1984. She claimed self-defense at trial, and was ultimately acquitted. In 1988, Diehl-Armstrong's husband, Richard Armstrong, died of a cerebral hemorrhage, though his death was officially ruled an accident. Roden and Wells marked only the latest in a number of men connected to Diehl-Armstrong who ended up dead.

"Marjorie is legitimately Mensa level brilliant," Schroeder shares of the criminal at the center of Evil Genius. "And she was so self-aware, so narcissistic, and to watch her play the FBI, and play fellow inmates, and this is someone who I think was able to outplay and outwit the FBI for a while. That’s pretty amazing."

But though Diehl-Armstrong was able to evade being tied to the case for a short period of time, investigators were finally able to connect her to the crime. Even with the case officially closed, the directors of Evil Genius felt that many of the key questions of the case remained unanswered. "This is something that we hope that Brian Wells’ family will look at," Schroeder shares. "They professed for years that their brother/son was innocent, so it will be interesting to see how people will respond when they see this story and the new reveals that come up in Episodes 3 and 4."

The directors tease that viewers should expect to learn about alleged new evidence the filmmakers were able to uncover about the case over the course of their documentary and investigative work. "There is an elusive eyewitness who the FBI talked to, she then lawyered up and they weren’t talking to her anymore, and she talks to us. And tells us something that we think spins the case in a whole new direction," Schroeder says of the alleged new evidence, which will be revealed in Episodes 3 and 4 of the series.

But though the creators of Evil Genius want the viewers of their series to be entertained, they also want this new look into the case to reopen certain questions that they believe were answered unsatisfactorily. And Borzillieri and Schroeder, who have been embedded in this case from the very beginning, are in a unique position to share this story. "We want the audience to have a really satisfying participatory journey in this during all four episodes," Borzillieri says of his hopes for the series, "and we really feel like this is giving a second chance at justice, on a few different levels."