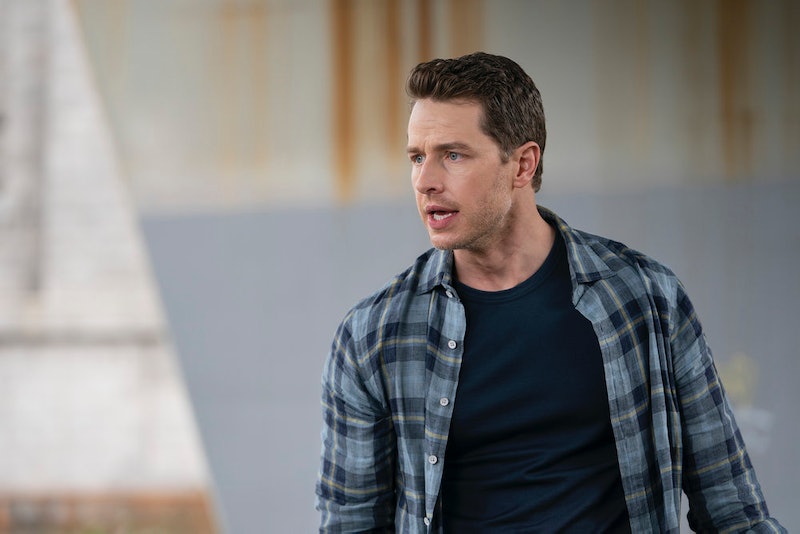 Spoilers ahead for Manifest Season 2, Episode 12. Ben has a new calling on Manifest of the plane exploding, and he can't figure out what it means. He spent the majority of Michaela's wedding episode trying to solve the explosion calling, and — just when he thought he cracked it — he turned out to be wrong.

Unlike many of the callings, which seem to preview something happening in the future, this calling appears to be more of a memory of the past. Ben witnessed the plane exploding in Season 1, and this calling is a snippet of that moment. Confused by its meaning, and the fact that no one close to him was also having this calling (not TJ, Michaela, Cal, or even Zeke), Ben returned to the airport where he first saw the plane explode in real life.

Soon, he was joined by another passenger who had been having the same calling. He was the flight's safety inspector and believed he was being haunted by the image of the explosion because he'd done something wrong when he'd inspected the plane. Ben was able to help show him that the inspection team after the plane landed found nothing mechanically wrong. Whatever happened to the flight, it wasn't the original inspector's fault. Then, when leaving the man's apartment, Ben then found his mom's old bridal veil being sold at a thrift store, which in turn helped Michaela see that marrying Zeke was the right thing to do. These connections were enough to convince Ben that he'd solved the explosion calling. But he had it again at the end of the episode, which means he hasn't discovered the true explanation yet.

In an interview with TV Line, Josh Dallas, who plays Ben, said that the callings in this episode "push us toward the end of the season, and they are significant." The finale airs next week on April 6, and while the synopsis says nothing about the explosion calling, it does hint at what's to come.

"Michaela and Ben put everything on the line to attempt a daring rescue. As the final hours of Zeke's life approach, Saanvi and Vance make a last-ditch effort to appeal to the Major, who may be the only person who can save him from his death date."

All season long, creator Jeff Rake has been teasing that we'll finally learn whether the death dates can be stopped by the finale. Perhaps the explosion calling has something to do with that. When the plane originally exploded, some theorized that it was showing the passengers how they were originally supposed to die — in a fiery plane crash. Now, their death date is still a few years off, but maybe the calling will help Ben figure out how to stop the death date and save Zeke before his final day runs out.

There's also a theory posed by the Manifest828 blog that the plane's explosion is a sort of reset, like how Michaela thought the lab explosion in Season 1 was a reset for the callings. They went 10 days without one after that event. If Ben can figure out the explosion calling, maybe it will take them back to when the plane originally exploded and buy them all some more time?

Since Ben and the flight inspector are so far the only passengers having this calling, it will be a little tougher for him to solve it. He usually relies on Michaela and TJ also having insight on the situation. But whatever the answer ends up being, Dallas hinted to TV Line that it has huge ramifications for the future of the show. "[The finale is] going to tie up a certain idea about these callings and how we use them; and I think it's also going to ask more questions."

The first time this group had a calling about the plane, they were drawn to the airport just to watch it explode. Now that some of them are having a calling about it exploding, will they be drawn back to learn something new about why the plane exploded? At the time, Michaela believed that "as for whatever force brought us all here, it had no interest in being investigated" and that's why it exploded. Maybe now that force is ready to reveal itself to Ben, at the very least. Whatever happens with the explosion calling next, Dallas promised that "the end of the season is jaw-dropping."