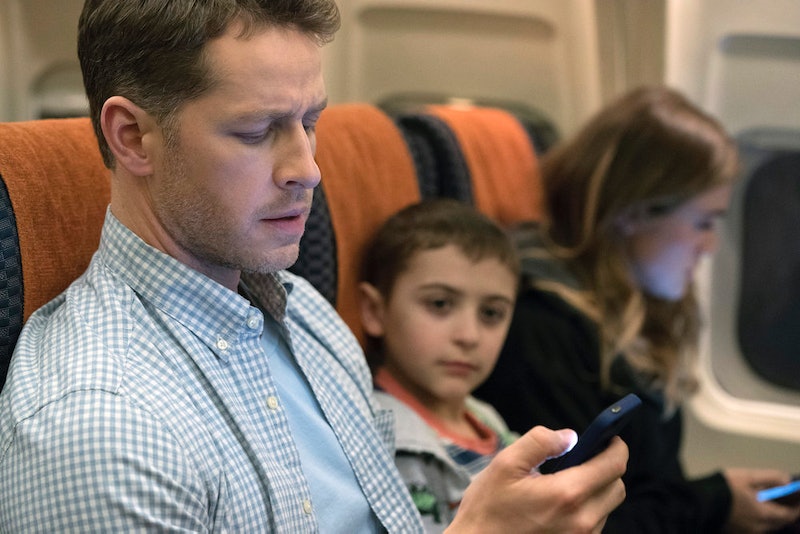 Only one episode of NBC's Manifest has aired, but fans are already swimming in theories. And while there's not too much to go on just yet, there are already several compelling guesses as to why the plane blew up on Manifest. Viewers will recall that at the end of the first episode, several flight 828 passengers were summoned to where the plane was being stored... and then all of a sudden, it exploded.

Michaela, who's so far served as a key narrator, explained it to audiences this way: "As for whatever force brought us all here, it had no interest in being investigated." That seems to suggest an otherworldly type of situation involving aliens — or in line with the spiritual references that littered the premiere, a godly act that blew up the plane so as to avoid detection. After all, the agents tasked with investigating how the plane was able to jump ahead five years were planning to take it apart the next day — something they'd mentioned just before it spontaneously combusted. Maybe the plane's parts would have revealed the secret behind what happened on the flight, and whatever caused its time-leap didn't want anyone to find out.

It's also possible the explosion served as an ominous warning for what could happen if the passengers' abilities are discovered. There's obviously a reason they were called to witness it — maybe this was their reminder to keep quiet.

But those are just some of the more straightforward answers. There are limitless possibilities as to what happened. Reddit user KellyKeybored, for example, speculates that the pilot could be responsible. "I think the only person that might be able to have access to the plane and sabotage it... may have been the pilot," the user mused. This theory suggests that he could have planted something ahead of time that would blow up the plane later via remote control — and he was in the crowd that witnessed the explosion, which would have given him the opportunity to detonate. The pilot may be playing dumb, but what if he actually knows more than he's letting on?

On YouTube, Random Ranter TV has another theory that the passengers actually caused the explosion. He thinks that this group, with their newfound abilities to predict accidents and save people, may be so powerful when brought together that the plane combusted just because of their sheer presence. They could have accidentally caused its destruction with their new, um, gifts, which fans haven't even seen the full scope of yet.

My own personal theory is that the explosion was meant to bring these strangers closer together. Michaela said in her narration that while they didn't know each other on the plane or even as they watched it explode, they would soon come to know one another as well as they know themselves. They needed that push to become a bonded group, paving the way for them to work together and figure out what happened to them. And, based on what creator Jeff Rake told The Hollywood Reporter about what happens next, they'll definitely need to unite quickly. As he explained:

"We see at the end of episode one that there is a small subset of passengers on the plane that take on a higher profile when they show up at the airport in that final moment of the pilot and witness the plane's explosion. As we get into episode two, we pick that up almost in real time and come to discover the 20 or so passengers, including our heroes, Ben and Michaela, are being focused on by the NSA. They were apprehended at the scene after the explosion, they're all being interrogated, and now going forward, they and this small group of the passengers are in the crosshairs of the NSA."

Hiding secrets from the NSA as an individual could be impossible, but if these 20 or so passengers can band together and protect themselves from the curious agents (and curious public), they may be able to carry out the voice's mission and maybe even piece together why this is happening to them in the first place. But they'll have to come together, and it sounds like the exploding plane was just the catalyst they needed.