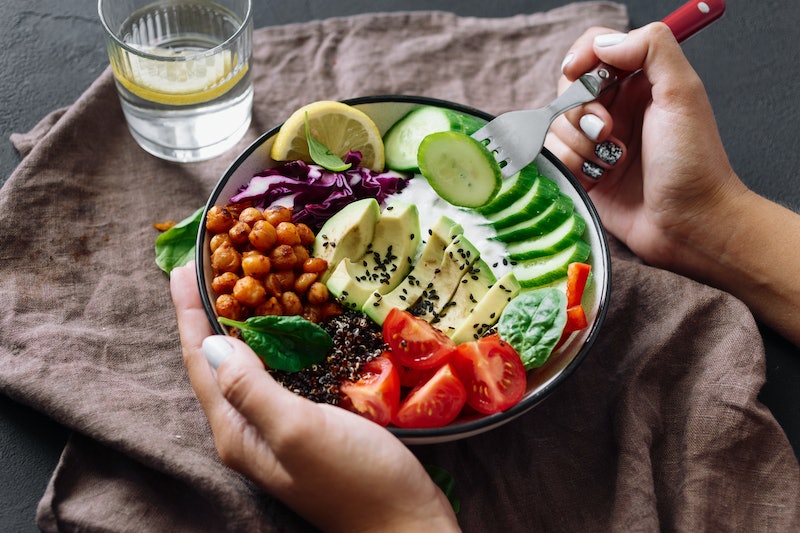 If you pay attention to eco-friendly news, you may have heard about the "planetary health diet." It's a plan created by the organization EAT and Lancet, a medical journal, and is aimed at, well, saving the world. The basic idea around the planetary health diet, which was designed by 30 scientists, is that the way people currently eat is largely unsustainable, and that an adjustment in the way we feed ourselves can both help global health goals and make an impact on environmental problems. However, there's another side to this — how effective the planetary health diet really is, and whether it's the best choice for saving the planet and fueling yourself.

The basics of the planetary health diet, according to the BBC, are more or less flexitarian: a lot of vegetables, a little meat and fish, and low amounts of carbohydrates and dairy. Professor Walter Willett, who was one of the key engineers behind the diet, told the BBC: "We're not talking about a deprivation diet here, it is healthy eating that is flexible and enjoyable."

The environmental aims are also admirable: the farming of livestock, The Guardian notes, is particularly tough on the environment, and researching sustainable food resources to support the world's growing population is a huge concern for researchers. Think things like the Impossible Burger, which is engineered to taste just like meat with way less environmental impact.

Another criticism of the EAT-Lancet diet plan is also that it requires a relative level of privilege to implement, making it inaccessible to people who rely on food stamps, or of people who rely on livestock industries for food and their livelihood. It also might not be appropriate in terms of nutrition for children, whose nutritional needs are very different to adults. The British Medical Journal reports that the World Health Organization actually removed its stamp of approval from the report after its health credentials and treatment of global cultural food heritage were questioned.

So if you're feeling conflicted about the planetary health diet, you're not alone. As far as eco-friendly eating goes, things rapidly get complicated; do you eat ethically-sourced local organic lamb, or kale that's been flown in from another country, or conventional pears that have been packaged in enough polystyrene to make a small raft? Every eating choice has costs and benefits, and it's unquestionably true that the way we eat impacts the planet.

Realistically, though, diet isn't the only way to make a difference environmentally — and it may not have as much of an effect as, say, collectively lobbying companies and countries to lower greenhouse gas emissions and invest in sustainable power. Just 100 companies worldwide are responsible for 71 percent of global greenhouse emissions, according to a 2017 study. And if you want to make your plate greener, it's not just your individual food choices that matter. "Moving towards a more sustainable food future will also require major improvements in food production practices and significant reductions in food losses and waste," notes the Harvard T.H. Chan School Of Public Health. Our diets are just one very tiny part of a much bigger industry with many potential impacts on the earth.

Revamping your diet to make it friendlier for the planet is totally your choice — but the conclusions of the EAT-Lancet commission aren't suitable for everybody around the world, and it's far more important that you meet your nutritional needs without restriction. You need to be fueled well in order to help save the planet, after all.