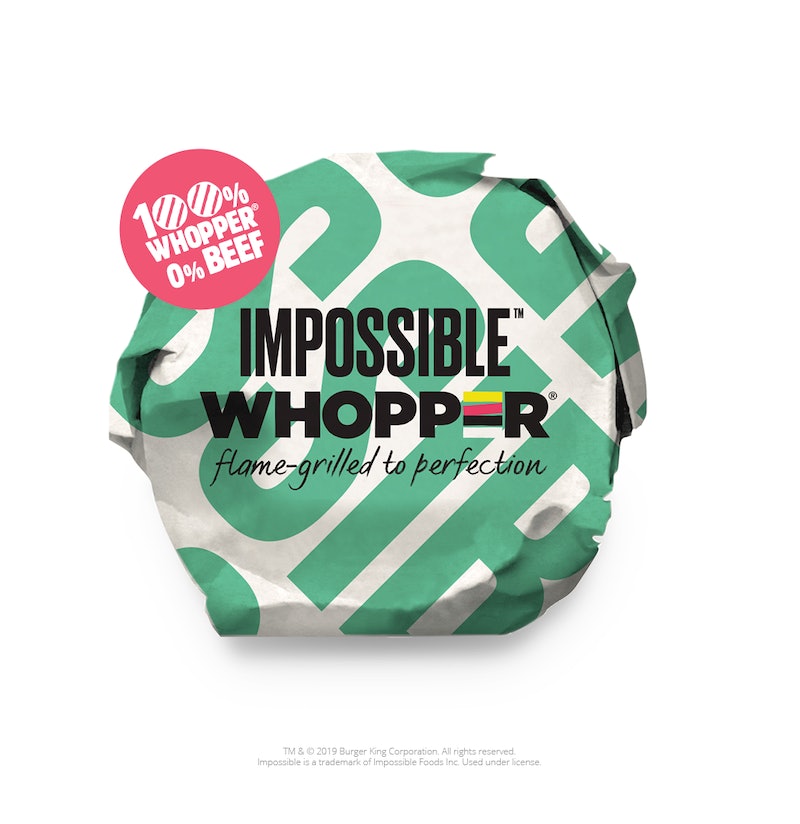 For those plant-based burger lovers out there, we've had some big wins recently. More and more delicious plant-based option have started making an appearance, it's true. But so far, the fast food plant-based options have been limited — or non-existent. Could that be changing? Could it be true? Well hold onto your horses, because apparently a Burger King Impossible Whopper is testing in select locations. It's called the Impossible Whopper because they've teamed up with the amazing deliciousness that is the Impossible Burger to make this Whopper a reality. And I don't want to speak to soon, but I feel like an actual Burger King plant-based option could set the world alight.

The timing may seem a little suspect, given the announcement is coming on April 1, but per a press release from the chain, it really is happening. "Starting today, 59 exclusive Burger King restaurants in and around St. Louis will be testing the Impossible WHOPPER — a flame-grilled, plant-based patty topped with freshly sliced tomatoes, fresh lettuce, creamy mayonnaise, ketchup, crunchy pickles, and sliced white onions on a toasted sesame seed bun," a Burger King press release explains. For those of you who aren't familiar with the Impossible Burger, it's made from protein, coconut oil, sunflower oil, and heme — a molecule that apparently makes all meat taste... meaty.

How delicious does that sound? Not only that, the company promises it's "as juicy, craveable and delicious as the original." For those of us who have tried the Impossible Burger before, we know just how much amazingness it can deliver. In fact, according to a video from Burger King, they sent the Impossible Whopper through a little test run and it did pretty well. In fact, people couldn't even tell the difference.

So yes, this is launching on April Fools' Day — but the trick isn't the Impossible Whopper's existence, but in just how much like the OG it tastes. That said, it's only testing in 59 Burger King locations in and around St. Louis, so most of us will have to take a trek to try it. But with plant-based eating on the rise — and plant-based goodies to match — the idea of a plant-based burger from a major chain like Burger King really doesn't feel like that far from a reality. It's easy to see that there's a demand for it.

If you aren't anywhere near St. Louis to try this test item, there are some other plant-based options coming in. In fact, McDonald's is already testing vegan McNuggets — though, alas, they're currently only available in Norway. But if you want some vegan goodness stateside, you don't have to look that far — Chipotle has vegan and vegetarian bowls ready to go. Sofritas will keep us satisfied — and have been doing so for years, while we wait for other major chains to catch up.

But if you're just a Burger King diehard, hopefully the Impossible Whopper will be a real option very soon. The chain also launched a new Burger King coffee subscription, which means you can get your plant-based fix and your caffeine fix all in the same place. Zippy plant-based of the world, UNITE!

We're still waiting for that one hero plant-based option at a major fast-food chain that can take our breath away — is it the Impossible Whopper? If you live in and around St. Louis, it's time to find out.