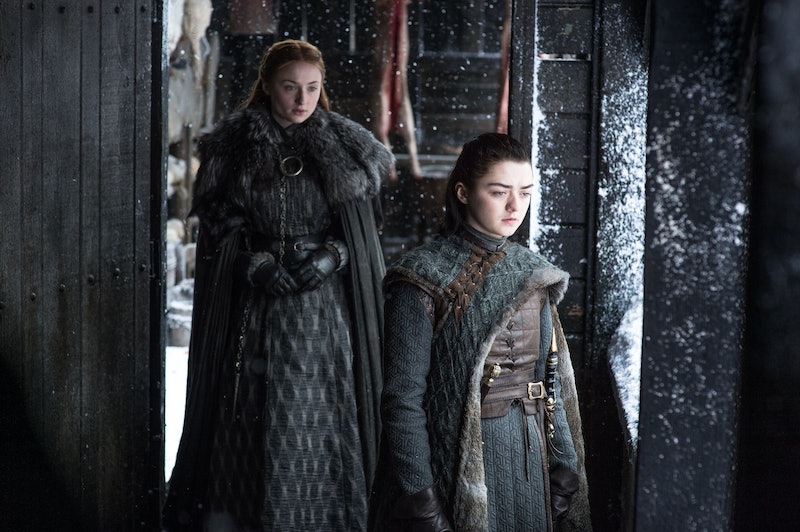 There's plenty we could talk about when it comes to the Game of Thrones Season 7 finale, but the one thing we legitimately need to be talking about involves our favorite Stark sisters. There was a huge Game of Thrones plothole involve Arya and Sansa's reconciliation during the finale. While it may be down to something in the script-writing and editing of the episode, it still doesn't erase the fact that in the span of one episode Arya and Sansa went from possibly killing one another to uniting against the real wolf in their henhouse, Petyr Baelish.

It was a satisfying scene, to see the tables turned on Baelish when he was least expecting and ultimately watching him die for his treachery, but the fact the GoT seemingly glossed over the one crucial detail needed to believe that it could work — the sisters' reconciliation — is a bit irksome.

Arya and Sansa did a surprising about face when, after spending the penultimate episode of Season 7 quietly threatening each other of concerns of Sansa's loyalty to her family, the two were seemingly united with Bran in their surprise trial for Baelish. It was a fake-out for the audience as much as it was for Baelish. We saw Sansa order the guards to bring Arya into the Great Hall at Winterfell. The girls traded short remarks about why Arya was there, with her ultimately saying get on with it. Then Sansa turned to Baelish after telling him he was accused of treason and murder. In doing so, Sansa and Arya stood united in their intention to execute Baelish for his crimes.

It was a big leap in character development for the sisters and more noticeably jarring a development when you consider how fast the pacing of Season 7 has been to hit major plot points, bring certain characters together, and move the plot at a breakneck pace toward the wars which have been looming since Season 1. That this plothole around Arya and Sansa is so noticeable in light of all this only make it even more problematic.

Are we supposed to believe that Arya and Sansa were at each other's throats (calmly and in a ladylike manner, of course) and quickly thereafter had a secret conversation that went a little something like, "Oh, no, just kidding. Let's forget our issues and just figure out a way to screw over Baelish." In a show where the fantasy elements are high, the only place that demands a little bit of realism is in character motivation and development, the two crucial areas Arya and Sansa's supposed reconciliation just glides right through.

Then again, the Season 7 finale chose to not show us another crucial conversation between sibling-enemies Cersei and Tyrion Lannister. While we did get to see their initial confrontation, we skipped over the crucial part of the conversation where Tyrion somehow convinced Cersei to send her troops North. We simply cut from Tyrion guessing Cersei was pregnant to Cersei announcing her intentions (which she would late renege on).

This means it's entirely possible it was a choice by the episode writers to simply imply that these siblings of these respective families recognize there's bigger fish to fry right now that petty squabbles; they'd rather get the big things done as a united front than risk weakening their positions for the sake of satisfying their egos. This would certainly justify viewers not seeing Arya and Sansa reconcile while also watching them close in on Baelish, united.

Hopefully this united-as-one-family business sticks throughout Season 8 as opposed to it being a temporary fix to root out the true evil. It's good to see the Starks united once again; to watch it go to waste would be a real shame.