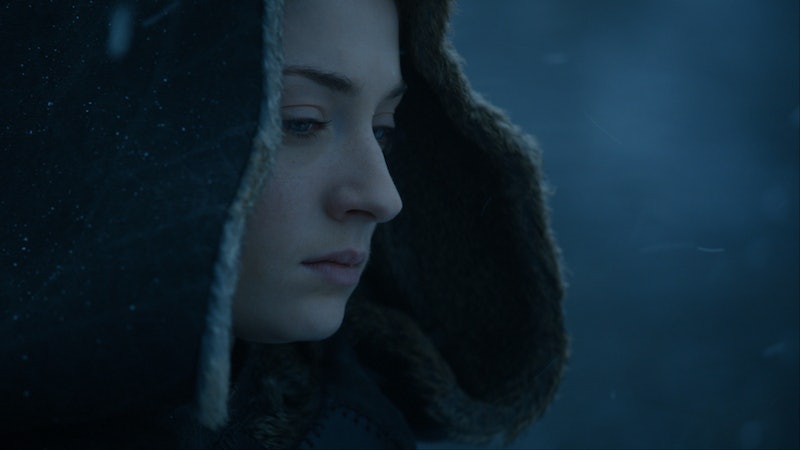 Another villain is gone on Game of Thrones, though Peter Baelish was more sneaky than downright evil. Still, his death was particularly fitting and satisfying. Why did Sansa and Arya kill Littlefinger on Game of Thrones? After he lusted after Catelyn Stark for decades, her two daughters were the ones who took him down.

The business with Sansa's letter wasn't the only reason that Arya pulled the figurative trigger. Bran helped to shed light on the many ways that Littlefinger has done wrong by their family, from betraying Ned Stark, to lying about the dagger, pretending that Arya was in King's Landing in order to free Jaime Lannister, and even orchestrating Jon Arryn's death in the first place. It's clear that the best interests of House Stark were never a priority to him, and he needed to go. Despite some nasty arguments that lead fans to believe the contrary, the Stark sisters will not be divided — and are certainly not to be messed with anymore.

Early in Season 7, Game of Thrones hinted that Sansa Stark was on to Littlefinger's methods. Her sly comments and jokes may have just seemed like comic relief at the time, but it was really foreshadowing that she was steps ahead of her mentor. In Episode 6, she learned that he was planning to use Brienne as a wedge between her and her sister, and therefore sent her bodyguard away.

One of the best things about the death scene, and the buildup throughout the season, was the way it kept the audience in the dark. Sure, it was a pain to be annoyed by Arya and Sansa's fights and actions throughout the season. However, without books to guide and even spoil fans, the tension is that much thicker. It made the reveal that much sweeter. We still don't really know how long Sansa and Arya were working together.

But, sisterhood won out in the end. Arya and Sansa even went so far as to stage Littlefinger's trial and execution as if Arya was the one being called to defend herself. They schemed the schemer, and it was so, so satisfying.