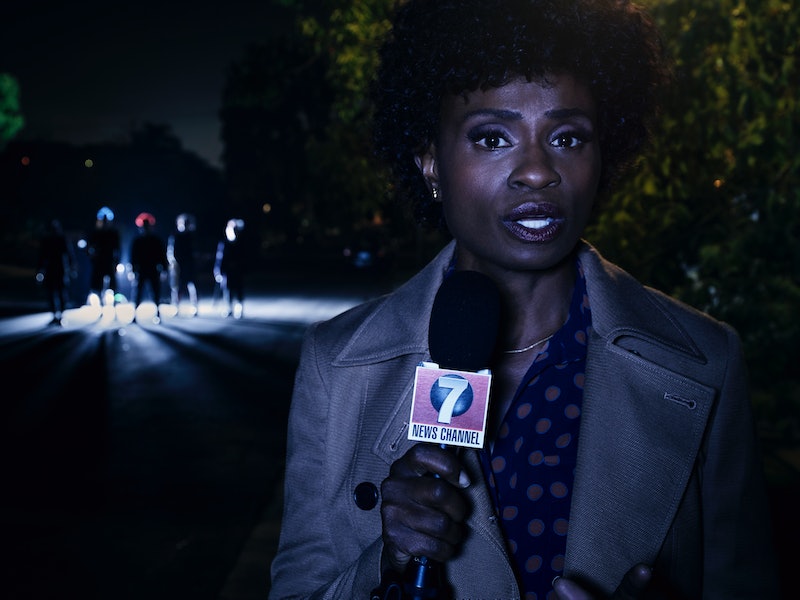 It's been made abundantly clear that the seventh season of Ryan Murphy's anthological fright fest takes aim at the 2016 presidential election, and the political meaning of American Horror Story: Cult is present from the first episode. The premiere opens with footage of Hillary Clinton and Donald Trump's campaign trails, then swiftly dips into an adept parody of the anxious dread that shadowed election night for many. But the theme of the season is far more than an elaborate jab at our country's divisive leadership, it's a study in the power of fear tactics, and what happens when they're weaponized for political or social gain.

This methodology, to some extent, can be applied to a discussion about Trump. As publications like The Atlantic have pointed out, his platform appealed heavily to working class voters — a disenfranchised and oft forgotten community sold on the promise of an America that catered to them, not the wealthy or elite it's long bolstered. It was an effective strategy — and for many, surprisingly so — but it wasn't an entirely new one. In fact, it's an approach that's been employed for centuries, and by some of the world's most successful (and destructive) figures.

As evidenced by the title, AHS most obviously connects to leaders of groups that have been referred to as "cults": Charles Manson, David Koresh, and Jim Jones will all be played by series regular Evan Peters, while his main character, an erratic alt-right enthusiast named Kai, begins building his own demented sect to help him climb the local government ranks.

Over the last few decades, there have been numerous accounts of how such figures rise to power. In a New York Times report from 1993, therapists that spent two months working with children from Koresh's Texas compound claimed his young followers' time there was marred by extensive verbal and sexual abuse. Koresh, they alleged, segregated the men and women, distanced the children from their parents, and punished them "for sins as small as spilling milk," crafting a meticulously controlled and deeply isolating environment. (Koresh was killed by a follower during the chaos that ensued during an FBI raid of the compound, per the New York Times.)

Elsewhere, Teri Buford O'Shea, who spent seven years with Jim Jones and his movement, described him as "charismatic" man who targeted people feeling vulnerable or disenfranchised in a 2011 interview with The Atlantic. "He always honed in on what you needed and managed to bring you in emotionally," O'Shea told the outlet. She claimed he did so by tapping into the zeitgeist of the '60s and '70s, inviting her and her fellow disciples to a remote South American jungle on the alleged promise that they'd create a "rainbow family" where everyone would be truly equal. He died, along with many of those followers, in a mass suicide he allegedly organized.

According to Dr. John G. Clark Jr., an assistant clinical professor of psychiatry at Harvard who spoke to The New York Times in 1982, these tactics are common among cult leaders. They'll prey on susceptible people — a student leaving home, someone who has lost a friend or loved one — by offering rewards like companionship, peace of mind, or a place to stay, then manipulate their minds into a "constantly debilitated state" through things like meditation, obsessive praying, and lack of sleep. Eventually, an emotionally distressing crisis is manufactured by the recruiters, and to survive, Clark told The Times, "they re-identify with their surroundings, and accept the dogma of the group."

On an even broader scale, this can be tied to regimes like North Korea, whose widespread censorship gives the government control of what information is or isn't disseminated amongst the public, per the Canadian Journalists For Free Expression. Similar tactics have also been utilized by dictators like Adolf Hitler, who, amid the chaos of post-World War I Germany, appealed to the anger and helplessness felt by a large number of voters. He pledged to restore German cultural values and pull the country out of depression, downplaying anti-semitisim in favor of nationalism and military buildup. There's been extensive research done about how the Nazis were swayed into carrying out mass murder, but the consensus, according to The Daily Beast, is that they felt personally distanced from the killing because they were operating en masse and taking orders from a higher-up. Interpreted differently: in order to survive, Nazis, who may have never imagined themselves torturing or killing previously, re-identified with their surroundings and accepted the dogma of the group.

In American Horror Story, then, Donald Trump— and American politics, for that matter — are not the primary focal point, but the mechanization of power that's long dictated history. As with any AHS installment, fear is the focus; the election is merely a starting block.

More like this
This First Look At 'The Gold' Shows Jack Lowden In A Whole New Light
By El Hunt and Sam Ramsden
The Dog & His Handler In 'Gunther’s Millions' Are Worth, Well, Millions
By Gretchen Smail
A New Netflix Doc Will Explore The Unsolved Murder Of Jill Dando
By Sam Ramsden
Eurovision Has Been Given A Whole New Look Ahead Of Its Liverpool Debut
By Bustle UK
Get Even More From Bustle — Sign Up For The Newsletter
From hair trends to relationship advice, our daily newsletter has everything you need to sound like a person who’s on TikTok, even if you aren’t.