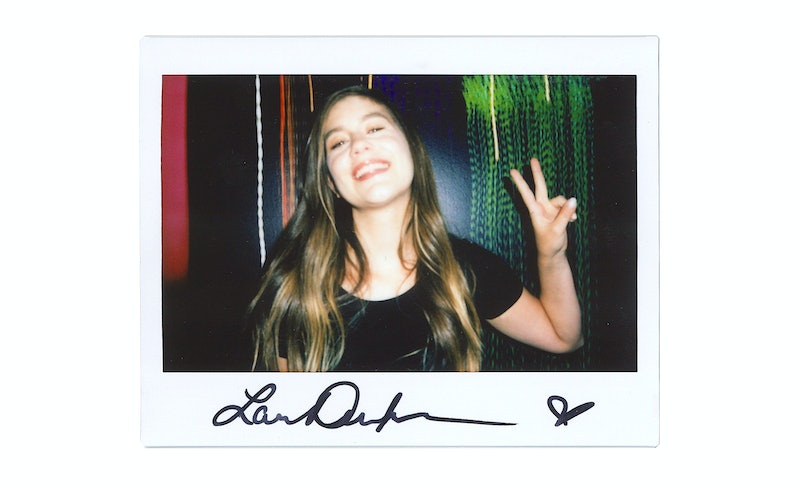 When celebrities hang out with Bustle writers, we want to give them the chance to leave their mark. Literally. So we hand them a pen, a piece of paper, a few questions, and ask them to get creative. This time, The Politician star Laura Dreyfuss is leaving her mark in the Bustle Booth.

"Oh, we love nasty women," Laura Dreyfuss says when I suggest that her character's particular fondness for blazers and matching pants on Netflix's The Politician could be the aesthetic embodiment of Pantsuit Nation. McAfee Westbrook's '70s power suits are "a combination of young Gloria Steinem and David Bowie," she adds — with a little Florence and the Machine thrown in there, too. But underneath the menswear inspired looks is a teenage political strategist that any candidate would be lucky to have — in junior year and beyond.

On The Politician, McAfee uncovers a startling truth about just how cynical "real" adult politicians can be, and vows to take on the establishment with her team. It's a shocking revelation, the actor says, but an empowering one. "As a younger generation we kind of have to pick up the slack of the older generation," explains Dreyfuss, "because they really didn't help us out."

The existence of a political advisory team for a high school campaign may have seemed too campy even for The Politician creator Ryan Murphy's standards five years ago. But in 2019, it's not that unrealistic. Between the Parkland survivors and environmental activist Greta Thunberg, politically ignited teenagers are everywhere, and they're stepping up.

"We're starting to see young people [...] care more than they ever have before," Dreyfuss says, attributing this to the empathy that's cultivated by access to information via social media. "Authenticity is something that we discuss a lot in the show, and what makes somebody authentic. I think that people are so drawn to [Thunberg] because she's so authentically angry." Dreyfuss' character on The Politician is ambitious, sure, but it comes from an authentic, empathetic, and sometimes angry place.

So despite The Politician's silly and sardonic tone, Dreyfuss says, "at its core, it's really just human and talking about real things that we're still figuring out as a society." However, for more silliness and a few emojis, check out her answers to our Bustle Booth questionnaire below.

More like this
On 'Industry,' Marisa Abela Takes Control
By Morgan Leigh Davies
Tacos Are Chef Kay Kay’s True Love Language
By Maxine Harrison
Laura Tott From 'First Dates' Married Her Long-Term Mystery Boyfriend
By Darshita Goyal
Reese Witherspoon Got Hooked On ‘Never Have I Ever’ After Son Deacon’s Debut
By Stephanie Topacio Long
Get Even More From Bustle — Sign Up For The Newsletter