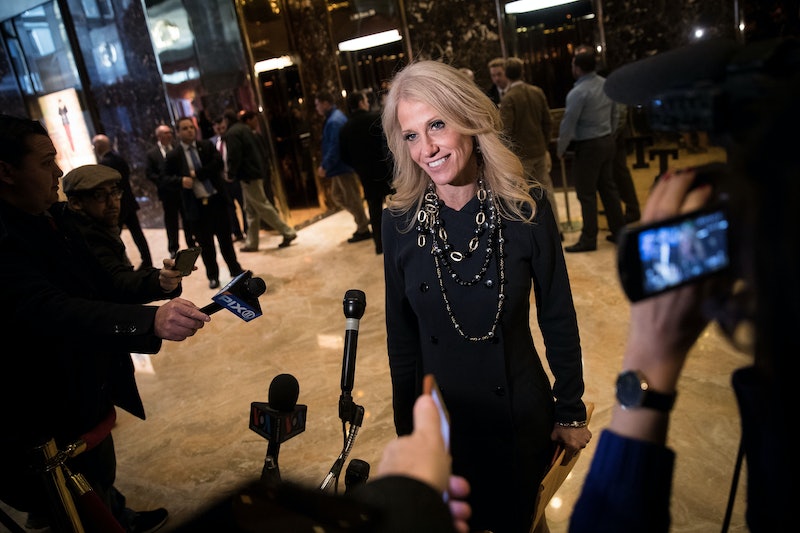 The relationship between the press and the president is adversarial by nature, but under President Trump, it has become distinctly hostile, if not worse.

The White House regularly slams media outlets as "the enemy,” revokes the press credentials of reporters from reputable media outlets, and shuts American media out of meetings with foreign dignitaries. Trump isn’t above calling out journalists by name, whether at rallies — as he did NBC News’ Katy Tur — or on Twitter — as he did to Megyn Kelly, who later received death threats. On the campaign trail, he appeared to mock a disabled reporter. He's characterized the leaks from the White House as "lies" and reportedly called for journalists who report on them to be imprisoned.

But there’s no outlet as maligned by the president as CNN, which has emerged as the president's top target in his war on the press. He’s repeatedly blasted the network as “fake news” on Twitter and, once, to a CNN reporter’s face. He’s mocked CNN’s ratings and trashed its coverage as biased. His attacks on CNN have even extended to an official statement from the White House accusing the network of censorship for refusing to air his 2020 campaign ad, in which he criticizes the network as "fake news."

And yet — CNN consistently invites the president’s spokespersons to return to its shows, despite the fact that these on-air interviews often disintegrate into shouting matches.

Why Put Trump’s Surrogates On?

CNN’s chief political correspondent Dana Bash — whom Trump once scolded for asking a “rude” question about his campaign days before the election— insists that journalists must allow space on cable news for the people who represent Trump, even if they're hostile or don't have the full picture. "I think it’s important to put them on," Bash tells Bustle, stressing fairness to the president. "If we didn’t, it really wouldn’t be fair to the person who was elected by the people of this country.”

But challenging Trump and his aides has consequences beyond being publicly criticized by the White House and having press credentials revoked — observers have said that the president's hostility has translated into an ugly culture of physical violence against journalists.

In February 2016, a TIME photographer was reportedly choked and thrown onto the ground by a member of Trump's security team. Two months later, former campaign manager Corey Lewandowski was charged with simple battery for manhandling Breitbart reporter Michelle Fields and pushing her out of the way — which he initially denied, until footage of the incident emerged.

This culture of violence shouldn’t shock anyone. Critics say an alarming side effect of Trump's disdain for the press is that it has potentially empowered other politicians to let loose. Since Trump was sworn into office, there have been multiple reported incidents of physical violence towards journalists, the latest being Montana Republican Greg Gianforte body slamming a Guardian reporter, Ben Jacobs. The press advocacy group Reporters Without Borders cautioned that Trump's election had "set off a witch hunt against journalists."

The nature of Trump's presidency has made his relationship with the press more complex than his predecessors'. Despite, or because of his attacks on the media, Trump has reinforced the significance of a free and fair press in democracy. "For journalists anxious about the state of their profession, there is a renewed sense of mission," Michael M. Grynbaum and Sydney Ember wrote in The New York Times back in February. Trump's tumultuous presidency has made the need for good journalism more crucial — and more lucrative — than ever.

Victor Pickard, an associate professor at the Annenberg School for Communication at the University of Pennsylvania and the author of America's Battle for Media Democracy, wrote in Jacobin Mag about the commercial media's role in electing Trump. "Even as Trump attacked the press — mocking and feuding with journalists, threatening to change libel laws, holding campaign events where reporters were corralled and roughed up — he still served major media outlets well," Pickard wrote. "The news organizations covering Trump, particularly television stations, reaped incredible amounts of money from their election coverage. Cable news organizations’ expected haul this election season? A record-breaking $2.5 billion."

Print publications have been seeing a pay-off as well. In an email to Bustle, Pickard writes that "many publishers — especially large national newspapers — have received a 'Trump-bump' in subscriptions."

"As a country, we should be able to have full confidence in people who work with the president."

From the chaos of election night, dozens of journalism job openings emerged, newspapers saw their subscriptions balloon (The New York Times' executive editor, Dean Baquet, said that Trump is the "best thing to happen to the Times’ subscription strategy"), and the ratings of cable news networks like MSNBC and, yes, CNN, soared to new heights.

For CNN president Jeff Zucker, Trump's presidency could not have come at a better time. Jonathan Mahler at the Times reported in great detail about the near-symbiotic relationship between Zucker and Trump, one they've cultivated since the latter's days as a reality TV star. (Zucker was president of NBC Entertainment, the network that aired The Apprentice.) From the moment Trump made his descent down an escalator to announce his presidential bid, cable news networks seized on his long-shot campaign's absurdity, but none with quite the same fervor as CNN. According to the Times report, 2016 was the "most profitable year in CNN’s history," earning nearly $1 billion.

Now that Trump is president, CNN has positioned itself at the heart of the push-and-pull between the White House and journalism — and having Trump's surrogates on air to spar with its anchors is part of the strategy. Over the course of the campaign, the network had Lewandowski on its payroll, as well as pro-Trump political commentators Jeffrey Lord and Kayleigh McEnany. Recently, CNN's star anchor Anderson Cooper had Conway on his show for a contentious interview that led to Cooper rolling his eyes at her. That eye roll became the stuff of internet virality; clips of the exchange were shared online, and many pointed to it as another example of Conway's, and by extension the White House's, lack of credibility.

For CNN, it was a win. People were watching its coverage. They were talking about its anchors. And CNN once again reinforced its relevancy in Trump's America. The network did not respond to multiple requests for comment from Bustle.

Given Trump’s surrogates propensity for misrepresenting facts, covering Trump’s White House has been an ongoing and illuminating challenging for reporters. If nothing else, putting Trump’s team on the spot is an attempt to give the White House a chance to defend themselves, even though they often end up making the situation worse. Take Kellyanne Conway's running streak of absurd comments in the early months of Trump's presidency, including her "alternative facts" gaffe and her reference to the nonexistent "Bowling Green massacre", which eventually led CNN to turn down an offer from the White House to have her on air.

Erin Burnett, host of CNN's Erin Burnett Outfront, acknowledges that Trump's media representatives haven't been the most effective messengers, pointing to the conflicting reports from the White House about FBI Director James Comey's firing as an example.

“When the Comey thing happened,” Burnett tells Bustle, “they certainly weren’t ready.” The initial memo announced that Comey was let go under the recommendation of Deputy Attorney General Rod Rosenstein because of the way he handled Hillary Clinton's email investigation (a reasoning that raised eyebrows, considering Trump's praise for Comey on this exact matter on the campaign trail). The White House deputy press secretary aggressively pushed that line on reporters — until Trump himself went on air and contradicted it. Speaking to NBC News' Lester Holt, Trump said he decided to fire Comey even before Rosenstein's recommendation, inadvertently noting that Russia was on his mind when he made the decision: "I said to myself, I said, you know, this Russia thing with Trump and Russia is a made-up story."

Striking the right balance between stoking drama and keeping accountability can prove tricky. And while Trump's surrogates haven't always been on message, Burnett says that traditional modes of airing grievances — beyond Twitter, that is — must be granted to the administration.

However, the more Trump's surrogates try to defend him in public, the less believable they sound altogether. Burnett says that is cause for deep concern. "As a country, we should be able to have full confidence in people who work with the president that what they say is indeed what the White House is trying to convey," Burnett says. "And when that isn’t the case, then there becomes uncertainty."

“Uncertainty” is an apt descriptor of Trump's presidency. Six months in, with FBI investigators reportedly closing in on the White House, key campaign promises unfulfilled, and near-historically low approval ratings, the administration's reported internal chaos and its inability to put out a cohesive message do little to reassure the public. But as long as there is chaos, there will be cause for breathless coverage, sensational chyrons, and cable news.