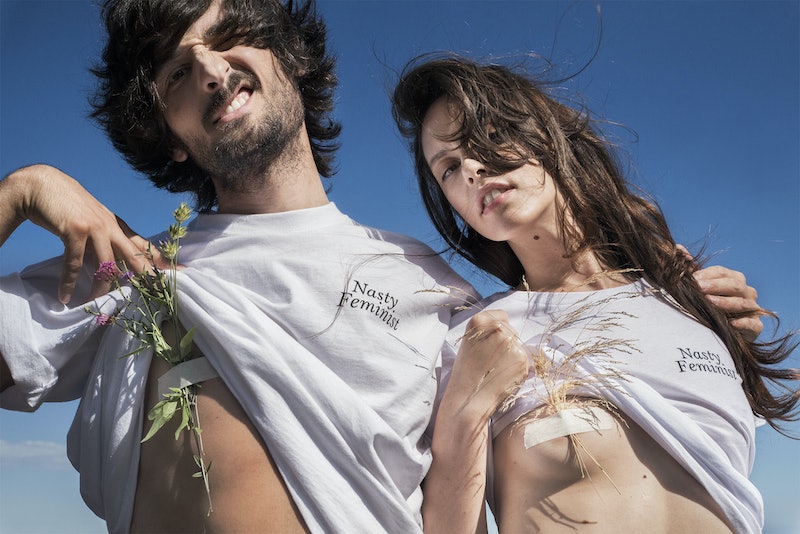 This year has brought a lot of personal and political woes for women. There's been the sexual assault allegations against many men in power, and a government that isn't exactly women-friendly. But Lust's collection of feminist clothing is here to turn that all around. The Power Pussy Collection is made up of shirts, underwear, hats, and tote bags that say things like "Kink is the new black" and "It's not gunna lick itself." Each one reflects the same thing that Lust's movies do — power, pleasure, and, well, style.

"I have always been aware of the 'vulgar' and negative connotation the word 'pussy' has, and I hate that," Lust tells Bustle. "Society has always used it mockingly to dismiss female anatomy and shame and put down people in general. A word used to degrade men for being seen as weak or feminine. There is a cultural connection between the word 'pussy' and the idea of cowardice and weakness."

The point of the line is to instead embrace the word and take back the power, similar to Pussy Hat movement of the Women's March.

"I am a woman with a pussy, which gave birth to two children. It's not a weakness to have one," Lust says. "I use the word in public often and with pride. I feel comfortable using that word and I subscribe to it. I want to reverse the way of thinking that makes people want to disassociate themselves from the word 'pussy.' Ever since the Women’s March on January 21, it’s clear that we’re in the middle of a pussy renaissance."

But the collection didn't just pop up out of that modern movement. The indie filmmaker has been creating award-winning, ethical, adult films since 2004. To celebrate her 100 short film released on the Erika Lust website, she decided to make the line to accompany it.

"I released the 100 short film from my project XConfessions in September, and my team and I wanted to do something to celebrate this landmark," Lust says. "We had talked about sloganeering and about the vague references and the soft approach brands had adopted but since we shoot sex for a living, we wanted to make it quite explicit what sex positive feminist values really stand for."

Lust says the team wanted unapologetic, blunt and loud statement slogans meant to spark discussion. And that's exactly what her audience has come to expect from Lust and their relationship to her films.

XConfessions takes real life sex "confessions" and turns them into short films. There's movies titled Tie Me Up and Pussy Power, which the line was actually named after. Along with every purchase of merch, you'll also get a code to watch an unlimited month of XConfessions for free. Because it all goes back to the meaning of Lust's work.

"There are several ways to fight against the status quo. I use my films," she says. "The messages on the apparel are just another way to showcase female sexuality and female's sexual agency in a patriarchal society which does not acknowledge any representation of sexuality that does not fit the dictates of male desire."

This year taught people more than ever that fashion can be an avenue for change. The graphic tee allows people to — quite literally — wear their opinions on their sleeves. The addition of thongs, hats, and totes are just an added bonus to your collection of armor.

Consider this your starter pack to your own personal 2018 feminist movement.