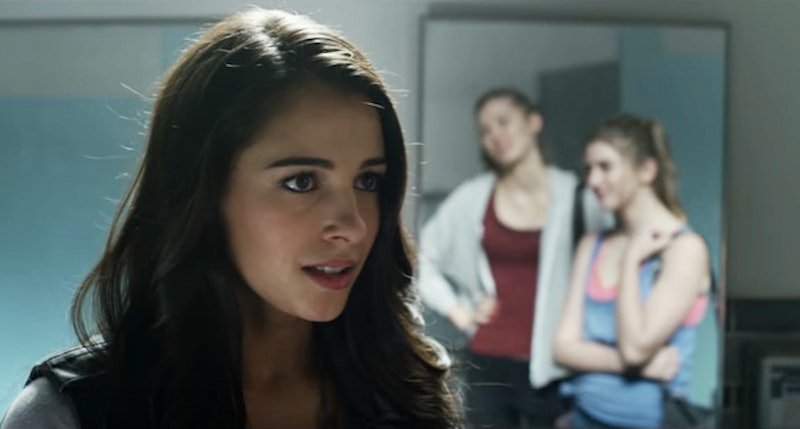 The first scene in Power Rangers features a joke about someone accidentally jerking off a cow. This is immediately followed by a graphic car accident featuring two teens. With no ado — and two lives still hanging in the balance — the Power Rangers title appears quietly on the screen. The fun, '90s logo has been replaced by simple orange letters on a black background. It's an incredibly odd, dark start to a movie about five teenage superheroes who fight aliens using robotic dinosaurs. But the opening moment is far from the only time a scene feels out of place, because, surprise, Power Rangers also features a revenge porn storyline.

As we come to find out, Kimberly Hart, the Pink Ranger, sent a nude photo of a classmate around because... Kimberly was mad at her? Something about a boyfriend? It's never made totally clear. Leaking a nude photo of another person is never OK, but there's not even an attempt to make Kimberly sympathetic or her actions seem at all understandable.

And yet, Power Rangers seems sure that you'll feel bad for her.

In another scene — which could have been a poignant moment showing two characters bonding had it been about almost anything else — Kimberly confesses to Jason Scott, the Red Ranger, that she leaked the nude photo of her friend. Then, inexplicably, she shows Jason Scott the photo.

In response, Jason demands that she delete the photo, which really drives home the point that she, for some unknown reason, still has the photo on her phone. So, yes, Kimberly, delete that damn pic. This reveal is, presumably, weeks later and somehow, we're supposed to feel bad for this jerk who just showed a nude photo of someone else to yet another person. Really.

We also find out that as a result of Kimberly sending the picture, the Pink Ranger punched her ex-boyfriend in the face and knocked out one of his teeth because he called her the meanest person he knows for sending it. (I mean, he's not wrong.) The storyline is basically "Woe is me! I'm suffering so much for sending revenge porn and punching someone's tooth out," including the part where Kimberly dramatically cuts off her hair in the school bathroom because she's been kicked out of her clique by the nude photo victim. She sent a nude pic of her friend around, yet she still doesn't understand that this is a reasonable repercussion.

The movie doesn't understand repercussions either, because Kimberly's ex-friends, one of whom is literally the victim of a sex crime, are shown consistently throughout Power Rangers as typical high school movie mean girls, and they are treated accordingly. We see Kimberly laugh when they get school lunch thrown on them and, later, during the big fight scene at the end, Kimberly smugly says, "That's what you get!" when the front of their car is smashed. What they get? Yeah, someone who boots a person from their friend group after that person sends a pornographic photo of them around really deserves to have their car totaled. Sure.

What makes the naked photo storyline even more frustrating is that without it, this movie could have been a pretty positive experience for young viewers.

But it didn't need to be this way. Why couldn't we have just learned about the Pink Ranger's family life like we did with the others? Maybe she has, I don't know, really dismissive parents who are too busy with work to pay attention to her. Or maybe she sends the nude pic, but we find out in a very clear way that she does feel really, really awful about it and, oh I don't know, learns from it.

Instead, the Pink Ranger is just straight up an *sshole, and no kid wants to be the *sshole Ranger.