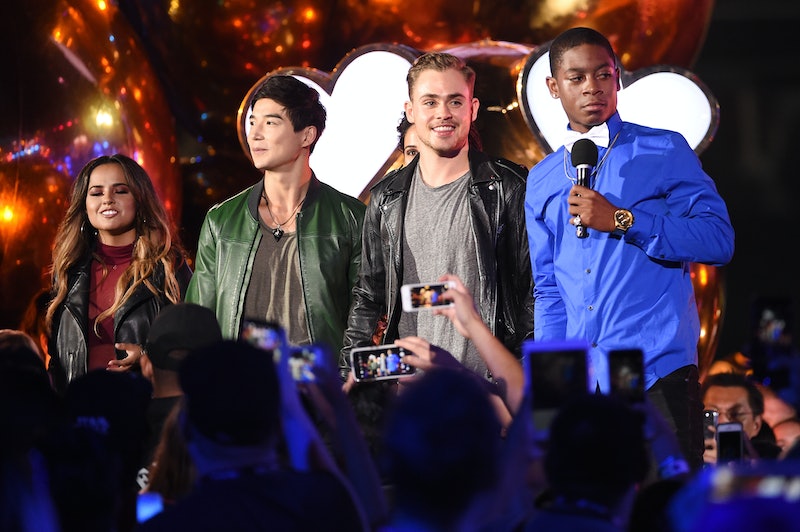 I've always been a sucker for high school movies about a band of misfit best friends who stick together despite being rejected by the cool kids. When I was a teenager, I must have watched The Breakfast Club a million times; I also had a soft spot for Pretty In Pink (OK, maybe I just really liked the '80s and Molly Ringwald). Even after I graduated high school, I still enjoyed movies like Mean Girls and The Perks Of Being a Wallflower — not because these stories reminded me of my own high school experiences, but rather, because I envied the camaraderie that was the driving force behind these groups of friends.

But the older I got, the more I began to notice the demographics of the lead characters in these films — and I started relating to them less and less. In every one of these movies, every single lead character was white. Every now and again, there was an acquaintance or friend who was a person of color, like the math-loving rapper Kevin Napoor in Mean Girls — but all of the main actors who landed on the cover poster for the movie were fair-skinned Anglo Saxons. Although I didn't quite realize it during my own adolescence, this was sending a pretty strong message to high schoolers everywhere that the only stories of youth worth telling were the ones about white students.

One of the reasons I was such a loner in my high school was because of biracial identity. Not only was I a person of color, but I was one who didn't neatly fit in anywhere. To make matters even worse, there wasn't much diversity in my hometown, so I stood out like a sore thumb and I often got made fun of. More than anything else, I wished there were other minorities around me who could understand what I was going through, and maybe even stick up for me when the "cool kids" were giving me crap about the shape of my eyes.

Furthermore, I would have loved to see myself represented in the great world of Hollywood when I was going through those awkward adolescent years. It wouldn't have wiped away the teasing or taken away my discomfort in the classroom, but it would have been comforting to see someone who ethnically resembled me as the star of a movie or TV show. Anyone who has lived their lives as a minority of any kind knows how important it is to feel represented and seen by society. It's a very small, yet very significant reminder that you belong in the world.

So when the Power Rangers teaser trailer debuted on October 8, I jumped on my couch for joy, not unlike loopy Tom Cruise on Oprah professing his love for Katie Holmes. I couldn't believe my eyes. Not only was it not an all-white cast, but it was a diverse cast, none of whom were household names (yet, anyway). It was everything I had ever hoped for in a high school superhero movie, unfolding right before my eyes.

I was especially excited about seeing the two young women at the forefront who were clearly not purely of Anglo-Saxon descent. I did some light online digging and found that my hunches were spot on: Naomi Scott, who plays the Pink Ranger, is a British actor whose mother is Indian, by way of Uganda. Then there's Becky G, also known as Rebbeca Marie Gomez, a Mexican singer-songwriter whose childhood was mostly lived out in poverty. She's the Yellow Ranger who seems to love speaking her mind.

Out of all the girls who have ever starred in the youth-driven movies I've loved for years — Lindsay Lohan, Emma Watson, Molly Ringwald — I had never seen a single one who I felt could represent me. To see not one but two young women who are minorities — and actually look like minorities, which is important — sent me to the moon and back. I did briefly think to myself, "Well, about ten years too late," and lament that my high school self wasn't able to see such a positive Hollywood move. Shortly after, though, all I could feel was triumph. It may not sound like a big deal on the surface, but it could make a difference for young women of color who ever feel insecure about their place in the world. It could teach them that they deserve to be leading ladies just as much as their white friends.

The Power Ranger guys look pretty diverse as well. RJ Cyler, a black actor originally from Florida, portrays the Blue Ranger (and the comic relief of the bunch, judging by the trailer), Chinese actor Ludi Lin plays the Black Ranger, and the Red Ranger, played by white Australian Dacre Montgomery. He seems to be the ring leader, but he's definitely outnumbered by minorities — and that's an exciting thing to see.

In an interview with Entertainment Weekly, Power Rangers director Dean Israelite said gathering a racially varying group of actors was always a priority. "From the very beginning, diversity was a very important part of the whole process," he insisted. "We switched all of the races around, but we made sure that the essence of each of those characters are who they were in the original show, and this really will be an origin story of those characters."

It's clear to see that the five actors who carry this reboot are just as psyched about the diversity as the people behind the camera. At New York Comic Con this year, the cast spoke about their unique group. Lin shared how he incorporates kung fu into his stunts, very similar to what you might see in Chinese cinema, but he tries to keep it fresh and original. He then added, "I'm just happy to see... an Asian face playing a great superhero role." All four of the other Rangers nodded fervently in agreement and verbally confirmed what a great thing this was.

"We're a diverse cast. That's what makes us really special," Becky G replied. "You got a real Mexican over here, that's for sure!"

Amidst all the laughter, it became clear that each of the cast members was as enthusiastic as the next about making up a diverse teenage superhero crew. More importantly, they knew how important this was for moviegoers everywhere. They agreed that this diversity was "where we should be heading to," as Lin put it.

It absolutely warmed my heart to see five young, talented actors speaking so eagerly about diversity in films. This is particularly special because it's a movie that's all about young adults, so the message Power Rangers is sending is one that will be carried for many years to come. It made me feel more hopeful than ever about the state of Hollywood. I believed (if only for a split second) that, even though it sometimes feels like we're moving backwards, with things like the #OscarsSoWhite mess earlier this year, the Hollywood big wigs just might start getting it right in the future.

For many, Power Rangers, which will be released next year, may be nothing more than a badass blockbuster reboot that promises to entertain. But for many high schoolers of color around America who are struggling to fit in or are dying to see a familiar face on the big screen, this could be a huge step of acknowledgment, and maybe even a collective feeling of acceptance by greater society. I know my sixteen-year-old self would have loved to see that beautiful cast take Hollywood by storm, but I'll let the minority teens out there revel in this monumental moment.

More like this
Keke Palmer Hopes 'Lightyear' Will Help “Normalise” Same-Sex Relationships
By Sam Ramsden
On TikTok, Miles Teller Is The Latest It Boy
By Meguire Hennes
Juneteenth Is Now A Federal Holiday — Here's What That Means
By Lani Seelinger and Syeda Khaula Saad
Eva Reign’s Joyous Ascent
By Alyssa Lapid
Get Even More From Bustle — Sign Up For The Newsletter