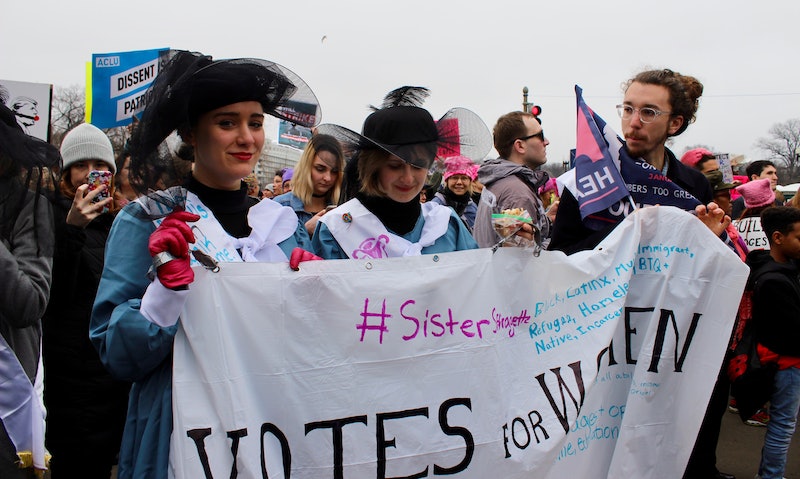 Looking out over the reflecting pool of the Lincoln Memorial, a sea of pink, cat-eared knit hats converged into one another. Meanwhile, thousands of the boldest and nastiest protest signs bobbed above the crowd, as a nearby line of young women marched in suffragette outfits befitting of the occasion. After all, this was the Women’s March On Washington, and it was another historic time to be heard.

Reporting from within a demonstration of this size was a first for me. Everywhere I looked, marchers in powerful “pussyhats” were chanting their songs of Donald defiance: "We will not go away. Welcome to your first day!” Mothers walked beside their daughters in solidarity; friends strolled with family, coworkers and strangers in a peaceful show of arms largely directed at the newfound Trump administration. And as icons like Gloria Steinem and Madonna took the main stage, everyday Americans flooded the National Mall, with each one sharing their impassioned rallying cries for all of the world to see, and evidently join alongside.

But chants weren’t the only way for marchers to leave an impression. Donning feminist onesies, activist accessories, WMW official hoodies and just about every kind of uterus-related sign and pin imaginable, hundreds of thousands of demonstrators also showed their resistance largely by means of dress.

So I traversed the crowd to hear from some of these style icons firsthand. Why were they here? And what did their protest looks signify about the way they view the nation today? Because as the legendary Bill Cunningham once said, “Fashion is the armor to survive the reality of everyday life,” and perhaps that same advice applies for what already feels like an alternate universe.

"This was the first election that I voted in. I remember a bunch of our friends woke up early to vote. We were filled with energy and skipping to the polls. We took pictures next to Clinton and Kaine signs. We went to the apartment, and wanted to cut out a giant electoral map for the wall, but as the night went on, things got sadder and sadder. People started leaving the room. By the end, it was me and one other friend crying in front of the TV and waiting for the official call until 2:30 a.m. I wore this sweater that day, and when I went to vote in the primaries. I’m wearing it again today. The atmosphere here is so wonderful and inclusive and everyone has these pithy, inspirational signs. People are really out here showing what they believe in. It's a sign that this is our America, and our America might not be quiet, and it might not be nice, but it's gonna fight back."

"I'm Grumpy Princess. I'm a fictional character so I'm ageless, plus princesses don't age as dictated by the patriarchy. Being a personification of expected femininity in a patriarchal society is really exhausting, and I'm fucking sick of it. I've been taking lots of pictures today, and my outfit makes me really happy, which is off-brand because I'm supposed to be grumpy about everything.

Ever since I started talking about feminism—instead of just being cute and funny—all of the angry, misogynistic racists on the Internet found me and decided they're gonna make me miserable, so I don’t share my name and age. Over the next four years, I plan to do a lot more of this. I have a YouTube channel. I post silly stuff and sometimes I talk about feminist stuff, because that's important. It became clear to me when the angry, orange troll became president that it was probably really important for me to do more of this. This is how you smash the patriarchy from the inside. It sounds dirty, but it's not."

"I'm marching because I'm a survivor of sexual violence, and I feel like everything Donald Trump has said since he's started his run is terrifying for me as a woman. I've never really talked about what happened to me, so I felt like, 'Why not put it on a hat and write ‘survivor,’ without being so detailed.' It tells my story without telling my story, but it was important for me to be open and own that that's part of my past. I shouldn't be ashamed of it.

I'm going to continue to take up any activism that I can, and I'm going to start being vocal about my story so that other girls feel comfortable to be vocal about theirs, and seek help. Because [sexual violence] is a cycle and the less we talk about it, the more it happens, and the less [politicians] think it's important. I want to make it known that it can happen to you, but you can be okay. You can be strengthened by it. I'm inspired by this march, and my heart is warmed. I feel supported — it's amazing. We're not gonna be quiet and we can't be silenced. It's too late."

Molly: "I'm an American-Muslim, but I don't wear a headscarf on a daily basis. So if I was here without one, nobody would know that an American-Muslim is here in unity with everybody else. Right now is a time when having those symbols helps to connect us. We're standing up for one another. The signage is everywhere. Everybody has their message of why they're here and what's important to them. It's a message of having respect and standing with one another for the freedom and dignity of everybody. It's also tied into the fact that we're up against a potential Muslim registry and the inability to travel freely. I have a 10-year-old son who said, "Mom, we can't go on vacation because we might not be let back in." But we've already talked with so many amazing people today. The spirit [here] is beautiful. I'm getting chills under my nice, warm jacket, and thank god we are able to wear something that spurs discussion and creates a connection."

Laila: "Representing my American-Muslim identity, and my place in American society, is very near and dear to my heart. But being here and seeing the diversity of movements and organizations that people are passionate about has also made me realize that this idea of diversity in the United States is not just ethnic, socioeconomic or religious, but also a diversity of passion and vision and mission. Knowing how much this headscarf means to me, I see other women, men and children here, and there's something that means just as much to them—even if it's different, it's still beautiful. For me, my headscarf symbolizes the diversity of the American population, and also, the unity between your American and Muslim identity."

"I decided on the Chewie costume, because it's chilly. But there are so many signs I wanted to write: save the planet, don't touch reproductive rights, don't be an awful human being to everybody. So I would have to wear five signs, and instead of that, I went with something fun.

I think if I were not wearing something fun, I would be terribly upset, because I don't know what's going on and this country is a terrifying place to be. If we're not laughing, we're crying. I have to feel hopeful."

William: "We are members of St. Mark's Episcopal [Church], which offers hospitality and bathrooms for marchers for both days. We went up there to help out, but we also wanted to join the march. We thought the signs were appropriate — it's more important to be here today than yesterday."

Cecilie: "The streets are just packed with cheering, happy people with pink hats and wonderful messages. It is so beautiful and so moving. But outside of our church before, this random guy comes up and says, 'Can I take your picture? I've been here 50 years and I love this country.' I said, 'Oh, that's great. Where are you from?' He says, 'Miami.' I said, 'Thanks for coming!' He said, 'You won't be [thankful] when you find out why I came.' He supports Trump. So I said, 'I'm so glad to talk to you.' I happen to think we're heading for disaster, but there's good people on the other side and you gotta keep talking to them."

More than two million people across the world participated in the women's march. And if there's one thing that became infinitely clear from speaking with just a tiny portion of them, every person had their own thoughts, ideas, fears and aspirations about what the next four years will hold.

Whether they came equipped with sartorial signs or Chewbacca onesies, superhero outfits or patriotic headscarves, march attendees expressed their activism in style. They were accessorizing American unity, and perseverance, in a time fraught with uncertainty. So if fashion really was their armor to survive everyday life, they seemed damn well-prepared for whatever is to come.