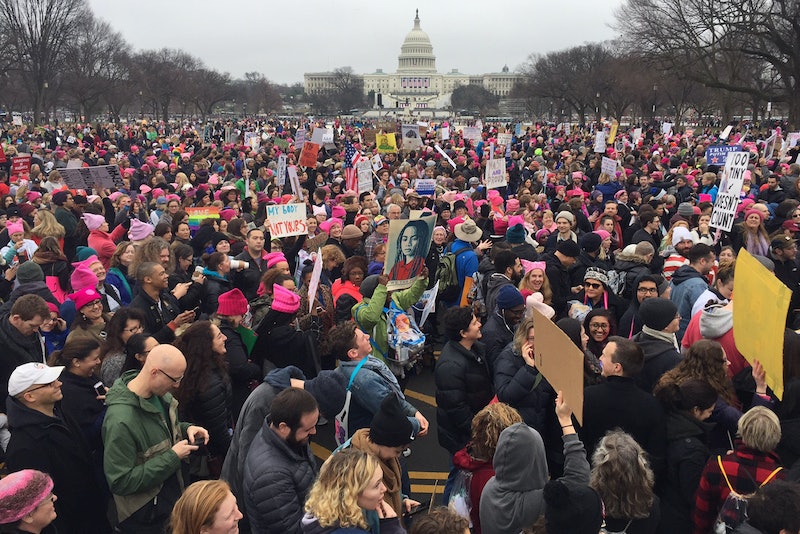 Well the day has finally arrived. The Women's March is in full swing. People from all over the country have arrived in Washington D.C. to show the Trump administration that women in this country will be heard. These photos of people marching in Pussy Hats at the Women's March proves that one small idea can spread to inspire many. The pink hats started as a small concept and quickly spread to become a nation-wide statement.

If there's anything to take away from the Women's March, it's that no idea is too small to become a full-fledged movement. As Bustle previously reported, the concept for the march started with Teresa Shook, a woman in Hawaii who originally posted on Facebook about her idea to protest during the inauguration weekend. Clearly, the event has taken on a life of its own. Similarly, the Pussyhat Project started with a small social media concept and has spread like wildfire.

In case you're a little behind on the political trend, the Pussy Hat Project is the group behind all of the pink caps you might be seeing all over the Women's March and the Sister Marches. The group knitted, sewed, and crocheted pink hats and inspired others to do the same. To say that it paid off is an understatement. Whether you're watching from the live stream or are at one of the events, you can't miss the sea of pink at the Women's March.

The name of the hat-making organization stems from President Trump's infamous "grab 'em by the pussy" quote that came out during the 2016 election. While some people have decided to wear pink hats that they already had, other are wearing the official Pussy Hats, which have a cat-ear shape on the top. The group has a hat template on their website, so that you can make your own to wear even after the Women's March.

Here are a few Twitter reactions that prove just how wide the movement has spread.

Speakers at the march are in the Pussy Hat spirit too.

I spy with my little eye... tons of pink.

This gives you a good idea of just how many people are wearing these hats.

It's so cool to see how many people have embraced the hats.

I can't even count all the pink caps in this one image.

Talk about a statement.

This is just incredible.

Just because you're not there in person doesn't mean you can't represent!

We won't go back.

There are pops of pink everywhere.

The people are ready.

Even people who aren't wearing the knitted hats are repping the color.

A whole bus of hats.

This is an awesome twist on the hat design.

More like this
15% Pledge Director LaToya Williams-Belfort On The Impact Of Supporting Black Business
By Dominique Norman
The 20 Most Comfortable Pairs Of Underwear For Women
By Kristin Collins Jackson
Zendaya’s Sheer Valentino Look Won Paris Fashion Week
By Dominique Norman
Bella Hadid's Best Runway Looks From Paris, Milan, & More
By Allie Fasanella
Get Even More From Bustle — Sign Up For The Newsletter