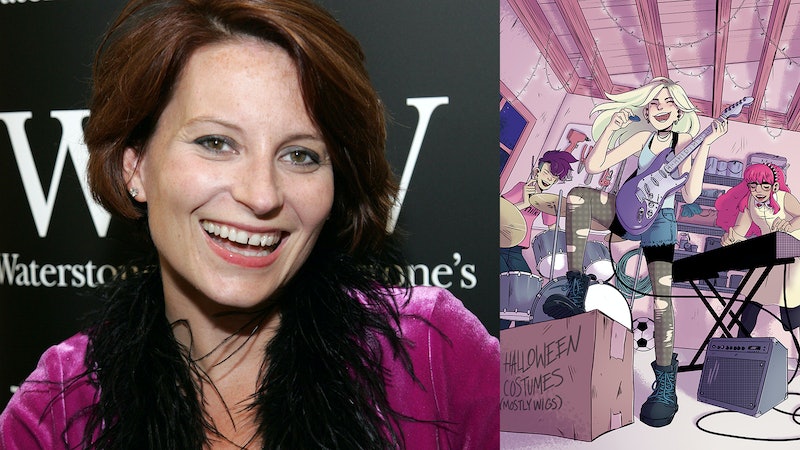 There's good news on the horizon for anyone who grew up loving The Princess Diaries and DC Comics. Meg Cabot is writing a Black Canary book with Over the Garden Wall artist Cara McGee, out on Nov. 5. Bustle has all the details, straight from Meg Cabot, as well as exclusive interior images from the new book.

In case you aren't a Black Canary fan, here's a brief rundown of the character. Dinah Drake's Black Canary first appeared in 1947, in Flash Comics No. 86. Later comics saw Dinah Drake's powers change from hand-to-hand combat to the "canary cry," an ultrasonic feature of her voice, which she can use to disrupt and dispatch all manner of bad guys as a member of the Justice League. Dinah Drake and her husband, Gotham City police officer Larry Lance, had a daughter, also named Dinah, who inherited her mother's superpower and alter-ego, and it is this younger Black Canary who stands at the center of Meg Cabot's new graphic novel.

Dinah Lance's story will be familiar to any woman or girl who has ever been told that she's tool loud, brash, and disruptive for this world. "I was always told as a kid that I was much too loud and needed to be quiet," Cabot tells Bustle, noting that things haven't changed completely since she was Dinah Lance's age: "Every time a woman speaks up they're just totally bombarded with negative messaging, and I think that's so important that we tell girls it's okay to be loud and speak out."

Black Canary: Ignite follows 13-year-old Dinah Lance through her day-to-day life as an awkward teenager and garage-band rocker. While she's trying to convince her father to let her join the Gotham City Junior Police Academy, the boisterous and fun-loving Dinah starts getting in trouble for things she didn't do, like shattering glass and bowling over her classmates in freak accidents. Her friends think she has telekinesis, but Dinah's about to find her voice — literally.

Dinah Lance's story is very much of this moment, when women are standing up and speaking out with greater visibility. "In the end," Cabot says, "she is using her voice.... In this political climate, we have to use our voice to find justice. [Dinah Lance] finds her voice, and learns to control it and use it for justice."

Because Black Canary: Ignite is coming out from DC Zoom, a new imprint for middle-grades graphic novels, Cabot and artist Cara McGee wanted to make sure that Dinah Lance made sense to girls her age. Like pretty much every superhero ever, Black Canary is meant to be a role model to her readers, but the character's typical costume might frustrate teens and preteens who find that their parents aren't keen on letting them wear leotards and fishnets.

"Cara was really interested in was making [Dinah Lance's] Black Canary costume something that a kid her age... would have in her closet," Cabot says. "If a kid her age picks up the novel, and wants to emulate her, they can." Black Canary: Ignite readers will find that Dinah Lance still rocks punk-rock tights, cut-off denim, and combat boots like nobody's business, but her look is presented as fun and quirky, rather than badass and sexy.

Black Canary: Ignite isn't the only new superhero book DC Zoom has lined up. Along with its YA imprint DC Ink, DC Comics has a boatload other new titles on the horizon, including —

— along with a bunch of other great-sounding titles.

Black Canary: Ignite comes to a store near you on Nov. 5. Stay tuned to the DC Comics website for pre-order information as it becomes available.