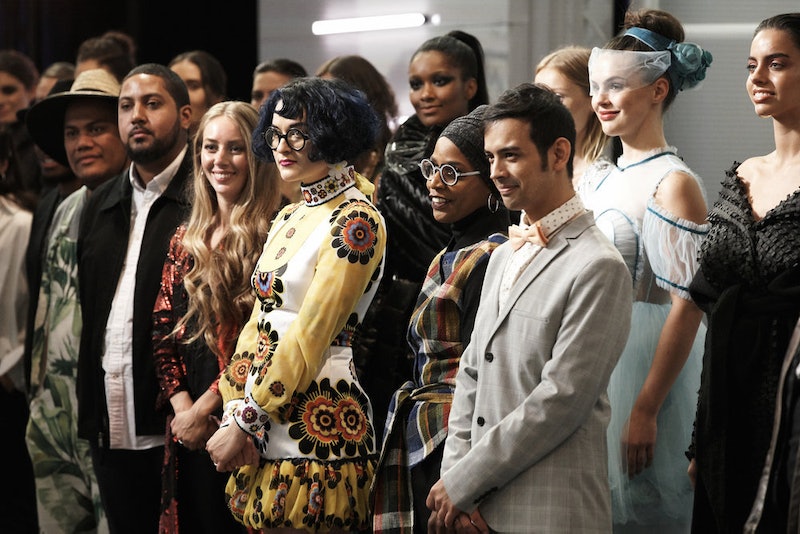 The designers aren't the only new faces on the new season of Project Runway. The Season 17 cast has changed a lot. On the judging/hosting/mentoring side, longtime cast members Heidi Klum, Tim Gunn, and Zac Posen all left the show after the series moved from Lifetime to Bravo. They've since been replaced by model Karlie Kloss, who's stepping into Klum's role as host, fashion designers Christian Siriano — who's taking over for Gunn — and Brandon Maxwell, and former Teen Vogue editor Elaine Welteroth. But there are also 16 brand new contestants vying for the chance to win.

According to Bravo, the prize package this year includes $250,000, a feature in Elle magazine, $50,000 for their design studio, and a CFDA (Council of Fashion Designers of America) mentorship with an established pro in their field. That prize money is significantly more than the $100,000 on the original series, so it's going to be a fierce competition with money like that on the line. Everyone is there to win. There are designers from all over the country and world representing an array of backgrounds, design experience, and ideas. Check out the cast below. (All background information comes from their Bravo bios, found here.)

Loo was born and raised in Samoa, where he got a taste for fashion after watching his mother sew his and his siblings' clothing. His first project was making a church dress for his sister, and he's since had his designs showcased at Buckingham Palace.

Rakan is from Syria, but left after the civil war. He's been studying fashion and traveling the world ever since. He lists his design inspirations as architecture and history.

Cavanagh is from Nashville and fell in love with fashion when she was 12. She now has a store in her hometown and has dressed celebrities from Heidi Klum and Lucy Hale to Camila Mendes and Miranda Lambert.

Tessa's designs are minimalistic and inspired by her childhood in Ohio with her miller father and potter mother. They're both honored in her womenswear line called Grind and Glaze.

Bishme is self-taught, but he's risen fast even without formal training. When he was just 16 he had his first fashion show, and he's since designed for celebs like Mel B and Niecy Nash.

Venny left New York City behind for Dallas, which he thinks was a great move for his career. His bio says "he was quickly embraced by the Dallas fashion scene and made a name for himself through networking and local fashion shows." He's dressed A-Listers like Cardi B and Michelle Williams.

Sebastian shares a Colombian upbringing with judge Nina Garcia. He's well-known in that country and has a couple of stores there, but now, he's looking to build a reputation in America.

While many contestants find their passion for fashion at a young age, Hill found hers later in life. After raising nine children, Hill pursued her newfound love for design and studied pattern making and tailoring in school. She translated that into a professional design career, which she's maintained for the last five years.

Sonia is mostly known for designing sportswear and has worked with Nike, the NBA, and the Olympics. It'll certainly be interesting to see how her sportswear background translates on Project Runway.

Kovid was born in India, but formally trained in the United States where he earned his MFA in fashion design.

Frankie is self-taught and started out by designing costumes for her local Kentucky community theater. She's especially passionate about designing looks for plus size women up through size 24.

Lela prioritizes designing eco-friendly fashion that's cruelty free and zero waste. She also focuses on using natural fabrics and dye. This industry could use a perspective like hers.

Jamall describes his design aesthetic as futuristic but inspired by the past. That kind of melding of two ideas is what Project Runway is all about.

Nadine was born in Jamiaca and takes her fashion inspiration from her mother. She now teaches fashion and has her own collection designed to make women of all ethnicities feel included.

Garo has a background in corsets, costumes, and bridal work — so his work should be interesting to see come to life. He's also known for his sculptural and conceptual looks, which celebs like Madonna have worn.

According to her bio, Hester's style is "colorful clown couture with a vintage punk rock edge," so you know she'll bring something unique to the table.

Fans can meet all 16 fresh faces when Project Runway begins March 14 on Bravo at 8 p.m. ET.