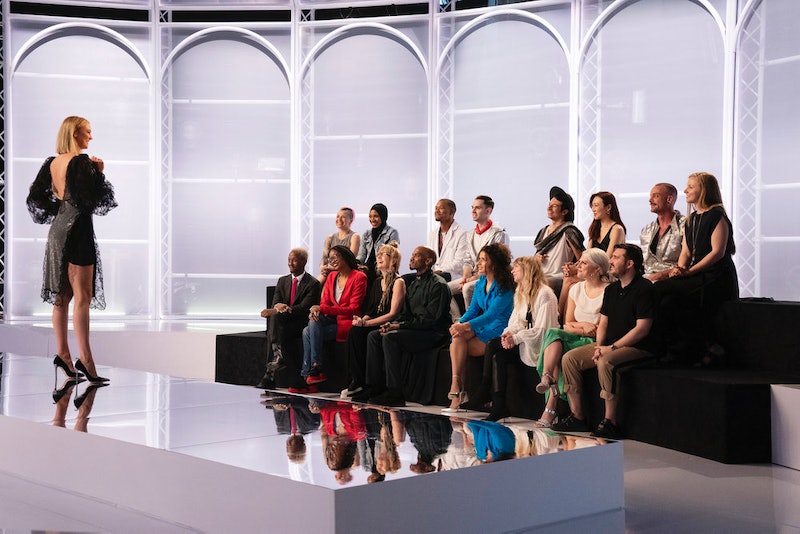 There may be 16 new contestants on Project Runway Season 18, but they're just about the only new parts of the season. According to Reality Blurred, the show is returning to its roots a bit by adding a "save" for mentor Christian Siriano not unlike the "Tim Gunn save" of the original series. It allows Siriano to help one designer escape elimination at some point during the season. Like Gunn's save, it can likely only be used once in the duration of the show, so don't expect Siriano to pull it out in Episode 1.

There also won't be any changes to the judges lineup: after Heidi Klum and Tim Gunn's shocking departures ahead of Season 17, Siriano will be once again joined by Elaine Welteroth, Maxwell Brandon, Nina Garcia, and host/judge Karlie Kloss, as well as a number of celebrity guest judges, per the series' usual format. According to Entertainment Weekly, some of the already announced guests include Cyndi Lauper, Laverne Cox, Leslie Jones, Chilling Adventures of Sabrina star Kiernan Shipka, The Marvelous Mrs. Maisel's Rachel Brosnahan, and Olympic skiier Lindsey Vonn. See the 16 designers they'll be judging — and what their Bravo cast bios have to say about them — below.

Brittany is a formally trained Texas designer who spends her days teaching others as an adjunct fashion professor. Can she handle being back in the student seat on Project Runway?

Asma is a self-taught designer who was schooled via YouTube and other online tutorials. She specializes in modest fashion, in accord with her Muslim faith.

Chelsey has an abstract style that's already been worn by celebrities including SZA and Chance the Rapper.

Being eco-friendly is important to Jenn, and it's a core tenant of her Stone Crow Designs brand. She reuses fabric and prioritizes using eco-friendly materials in her clothing. In other words, she should be a pro at the unconventional materials challenge.

Victoria grew up in Moldova but moved to the U.S. three years ago. She has a lot of high-profile fashion experience including having worked on sample teams at Armani, Burberry, and Guess. Now, she has her own ready-to-wear brand called Kheops.

Being self-taught doesn't make you any less of a threat int this competition, which is what Marquise is determined to prove. He built his career and his brand from nothing, and now he also gives back by teaching fashion design skills to students in Harlem, New York.

After moving to America from Mexico at the age of three, Alan grew up loving fashion and eventually turned it into his career. He owns a studio in Houston, Texas where he designs his own line of clean, colorful clothing.

Sergio got his start in fashion making clothes for his cousin's Barbie dolls. He went on to hone his skills at FIDM and FIT, and has designed clothes for Amber Rose, Indya Moore, and Kim Kardashian. He also created Billy Porter's tulle-filled 2019 Tonys look.

Dayoung Kim may not be super well-known in America yet, but she's huge overseas. She previously won the Korean show Project Next Designer and was once named Emerging Designer in Seoul. Now living in Portland, Oregon, she's hoping to expand her brand in the U.S.

Shavi didn't graduate from fashion school, but he's honed his skills by working on his own line for half a decade. He also works as a creative director for a menswear company. When he designs for women, his clothing is both feminine and a little daring.

Geoffrey has a unique point of view in his designs, and he prefers costume and couture styles. The judges can sometimes be harsh on that kind of aesthetic, but considering that Geoffrey has designed for Lady Gaga, Bjork, Pink, and Britney Spears, he clearly knows what he's doing.

To help him stand out from his nine siblings, Delvin took to making clothes. He describes his aesthetic as dark and romantic and claims he can create everything from ready-to-wear to avant-garde pieces. if that's true, he'll be one to watch this season.

Tyler is another Season 18 contestant with a costume background. His bio says he got his start designing for drag queens. He's self-taught via YouTube, books, and advice from his mom. If he can translate his dramatic drag looks to the Project Runway stage, he could be a real standout.

Veronica taught herself to sew, and later started her own clothing line. She went to school for drama and acting, so she's bound to be a big personality on the show. Time will tell how her fellow contestants feel about that.

Melanie started out at RISD but eventually left due to the high cost of tuition. She also recently took a break from designing to have a family. But now she's back and ready to wow on Project Runway with her clean, streamlined, Scandinavian-inspired looks.

At 64, Nancy is the oldest contestant to participate on Project Runway, but she's determined to show everyone that age is nothing but a number. Though she's been designing for less than a decade, she's already made a name for herself in the Philadelphia fashion scene. Can she hack it in New York too? Find out when Project Runway returns Dec. 5.