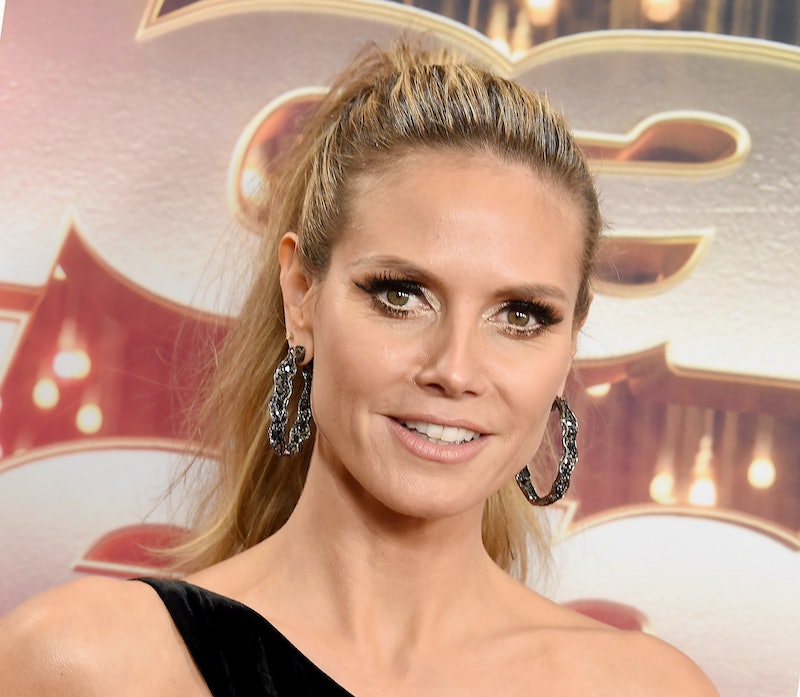 When Project Runway returns, it will be on a new network with pretty much all new faces. In one of three cast exits, Heidi Klum left Project Runway after 16 seasons. She joined mentor Tim Gunn and judge Zac Posen, who also departed after the series switched networks from Lifetime to Bravo. Still, that doesn't mean Klum's left the fashion world for good. In fact, she and Gunn are still making it work — just on a whole new show.

Despite the sudden exit, Klum had only kind things to say about her time on Project Runway. According to People magazine, her statement read:

"After 16 incredible seasons, I am saying 'Auf Wiedersehen' to Project Runway, a show that I was honored to host and help create. I am incredibly proud of the show, and it will always have a special place in my heart. I am so appreciative of the dedicated fans, and most of all, I am grateful that we could shine a light on creativity and help launch so many talented designers’ careers."

She then added the exciting news — she and Gunn are working on a new show together for Amazon. There aren't a lot of details about that series yet, but it will also be some sort of fashion competition, and one that's not limited to the U.S. According to Variety, the new project has opened casting to designers worldwide in order to help bring more of a focus to global fashion and design. The outlet reported that the series only begins filming this summer, so it will still be a while before it makes its way to fans' TV screens.

Project Runway also isn't the only show Klum recently left. After judging America's Got Talent for six seasons, she exited that show earlier this year, according to TV Line. She posted a photo on Twitter of her fellow judges along with a goodbye to thank everyone for the past six years. "I will be watching and voting from home," she promised.

An unnamed source claimed to Entertainment Tonight that the decision was made because the network reportedly wanted to change things up, and Klum had other projects in the works (as did Mel B. and Tyra Banks, who also left the show after Season 13). Mel B. and Klum's judges seats will be occupied by Gabrielle Union and Julianne Hough for the next season of AGT, per TV Line's report.

As for Project Runway, there are a ton of new faces on the judging/hosting/mentoring side. Judge Nina Garcia is the only one remaining from previous seasons. She's joined by former Teen Vogue editor Elaine Welteroth and fashion designer Brandon Maxwell. Taking Gunn's spot is Project Runway Season 4 winner Christian Siriano, while model Karlie Kloss is coming aboard as Klum's replacement. Still, Bravo acknowledged the impact Klum and Gunn had on the series with a statement.

"Bravo is proud to bring Project Runway back where it all began, and Heidi and Tim will always be a huge part of the legacy," a network statement said, according to the aforementioned Entertainment Weekly article. "The series will continue its iconic impact with Bravo’s reboot for the next generation of designers and fans."

Fans can tune into the Kloss-hosted version of the show beginning on March 14 at 8 p.m. ET on Bravo. And if you miss Klum, just know there are more fun fashion things coming from her soon.