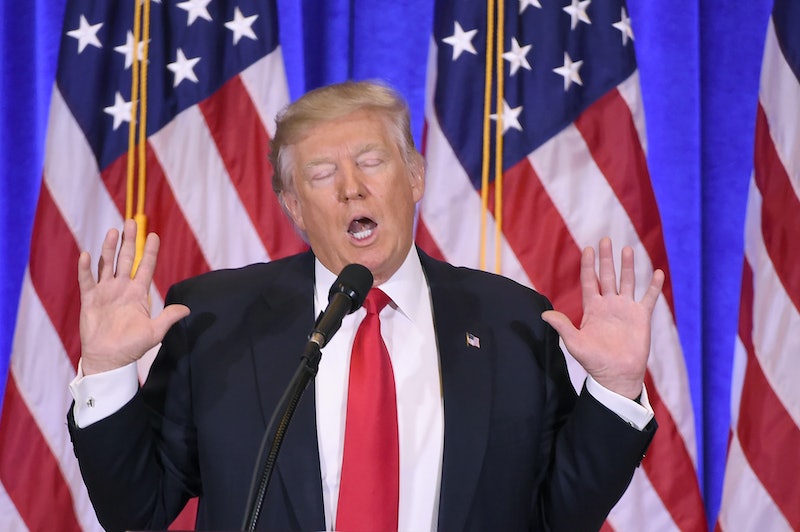 By now, the world has woken up to the revelation that 2017 is shaping up to be just as batsh*t as 2016. Tuesday brought to light very-unconfirmed allegations that Russia has documentation of Donald Trump watching Russian sex workers urinate on a hotel bed that was once occupied by the Obamas (believe me, that sentence was just as odd to type as it is to read), and is using it to blackmail the president-elect.

Putting aside these unconfirmed political rumors, which Trump adamantly denies (he tweeted in response, calling the story "FAKE NEWS - A TOTAL POLITICAL WITCH HUNT"), there's a lot here to unpack if you aren't familiar with fetishes in general, or what's called "watersports" in particular. Raise your hand if you had to Google "golden shower" on Tuesday? So, while we as a country are learning more about this particular category of kink, you may be curious about what drives sexual peeing fetishes, how they work, and if we can make any conclusions about people who are interested in this particular sexual interest.

Urinary play is otherwise known as urophilia, or watersports; up until this point, possibly its most prominent impact on the culture was an episode of Sex & The City in which actor John Slattery's character asks Carrie to indulge in a little of it by peeing on him in the shower, prompting her to break up him. But as Watersportsgate takes over cable news and people worldwide contemplate the endless puns that will result from this allegation about Trump, it's time to have a look at urophilia specifically and fetishes in general for how they develop and what they mean.

What Peeing For Sexual Pleasure Is All About

The essence of urine play is often about humiliation, power, and disgust. Urination is a private act and urine is culturally viewed as unclean, so arousal using urination, whether on oneself, on others, or on other objects, is often tied to the idea of subjugation. It's also forbidden, so watching other people do it could provide a voyeuristic thrill, one of breaking the rules. (The phraseology of the "golden shower," incidentally, comes from Greek myth, in which the god Zeus manages to impregnate the human Danae, who was locked in a bronze tower, by transforming into a shower of gold.)

One of the most interesting perspectives on urophilia may come from Havelock Ellis, a 19th century British doctor who published Studies in the Psychology of Sex and scandalized Victorian England. Ellis, in his correspondence and autobiography, revealed himself to be a cheerful urophiliac, noting, "I may be regarded as a pioneer in the recognition of the beauty of the natural act in women when carried out in the erect attitude." He thought the fetish had emerged from various incidents in his childhood and adolescence where he witnessed his mother urinating.

Dr. Mark Griffiths notes, in his review of the (quite limited) research on urophilia, that one of the most comprehensive understandings of it comes from a 1982 article by a Dr. Denson. Urine for urophiliacs, Denson noted, serves a lot of purposes: it's a sexual object in and of itself, but it's also sexy because it's used to humiliate somebody or "capture the spirit" of a sexual partner. So it fits into pretty standard sadomasochistic ideas about power, humiliation, and arousal. Nothing groundbreaking, to be honest, even if the method is more lurid than most.

Unfortunately there's not a lot of statistical analysis of peeing fetishes; a study of 1,500 Canadians in 2014, however, found that while they were "unusual" (less than 16 percent of the respondents said they'd fantasized about it), they weren't all that rare.

Is A Peeing Fetish A Psychological Problem?

Let's get something perfectly straight: there is nothing "wrong" or "weird" about the vast majority of fetishes, including peeing. Understanding this, however, has been a long journey. The Diagnostic Statistics Manual, the primary text for defining psychological conditions and disorders, has had a variety of approaches to dealing with fetishes. For a while, a historian explained in 2010, it put them all under one heading, including "persistent preferential sexual arousal in association with non-living objects, an over-inclusive focus on (typically non-sexual) body parts (e.g., feet, hands) and body secretions." Now, however, it distinguishes between "partialism," which is a focus on one specific part of the body (e.g. a foot fetish), and other kinds, like watersports.

The DSM is actually a good way to track how society itself has dealt with the notion of fetishes and "non-traditional" behavior. "Like their predecessors," Good Therapy notes, "contemporary mental health professionals frequently wrestle with the intersection of cultural norms and mental health, and the new DSM reflects this ongoing dialogue. Previous editions of the manual listed atypical sexual behaviors as diagnoses. For example, the DSM-IV listed the behavior of sexual masochism as a disorder. The new version, however, is largely silent on behavior, and defines fetishes as problematic only when they cause significant distress." In other words, a pee fetish is only an issue if you're very upset about your arousal, or if you do it to people without consent.

This is the big thing to remember here: current psychology only looks at fetishes as somehow harmful or upsetting if they distress the people who hold them, or contravene consent. So you may well not want to do it yourself, but there's nothing inherently "depraved" about urination, scatological fascination, or other bodily fluid fetishes. No kink-shaming.

Why Do Peeing Fetishes Develop?

There's a lot of psychological discussion about how different people develop distinct fetishes. It's a conversation that's been happening for ages; in the 19th century, for instance, spanking was termed "the English vice" (le vice Anglais) because so many British gentlemen demanded it from French prostitutes, though it's been known as a sexual behavior since ancient Rome. The theory prevailed that British men were reacting to a part of their histories: the propensity for beatings and caning at English boarding schools.

Psychology Today notes that some modern psychologists think that fetishes like urine fascination can take root in childhood, while others think it's more to do with adolescence. "An object was associated with a particularly powerful form of sexual arousal or gratification" in the person's history, it's suggested, and in adulthood they incorporate it into their sexual life. (This is what Havelock Ellis thinks happened with his peeing fetish.) How this happens is up for debate; Dr. Mark Griffiths suggests, for instance, that people "may in part be influenced by rejection of the opposite sex and/or by youthful arousal being channelled elsewhere (deliberately or accidentally)," or may "associate sexual arousal with objects that belong to an emotionally significant person like a mother or older sister and is known as symbolic transformation." A 2015 piece of research suggested that we learn fetishes and sexual turn-ons of all kinds rather like we learn languages: "in many directions, depending on circumstances." Urination arousal could turn up in somebody's sexual repertoire in any variety of ways.

It's not all about childhood or adolescent experiences, though. In a famous study in the '60s, explains the academic sexuality expert Dr. Justin Lehmiller, scientists demonstrated that fetishistic associations could actually be produced in the lab. Adult male participants were shown images of boots and beautiful naked women in sequence over and over again, while measuring their sexual arousal; after a while, the subjects started to be aroused by the appearance of the boots alone. Fetishes, it seems, are something we may be conditioned into, at any point in our lives.

Interestingly, a scientist in 2016 revealed that there may also be a neurological basis for one of the most common fetishes, the foot fetish. It seems that there may actually be a rewiring of connection between the parts of the brain focused on sexual arousal and those related to our conceptions of our own bodies (our feelings of them in space, for instance). What precisely prompts this rewiring remains up for debate, but the connections between particular activities or sensations and arousal may well be be neural as well as psychological. Nobody's done a neurological exam of people who are into peeing during sex, but it's possible something similar happens there.

We have no real ability to speculate on the sexual nuances of Trump's alleged episode with prostitutes urinating on Obama's bed. Plus, if it even really happened in the first place, it may not have been a sexual episode at all, merely a very juvenile way to express power and show disapproval. If it was a fetish, though, it wouldn't show that Trump is somehow warped. If you're going to go after his sexual behavior, focus on Trump's taped admissions of sexual assault and the 11 women alleging he groped them (claims he also denies), not on some random rumored episode in a Russian hotel with consenting adults.