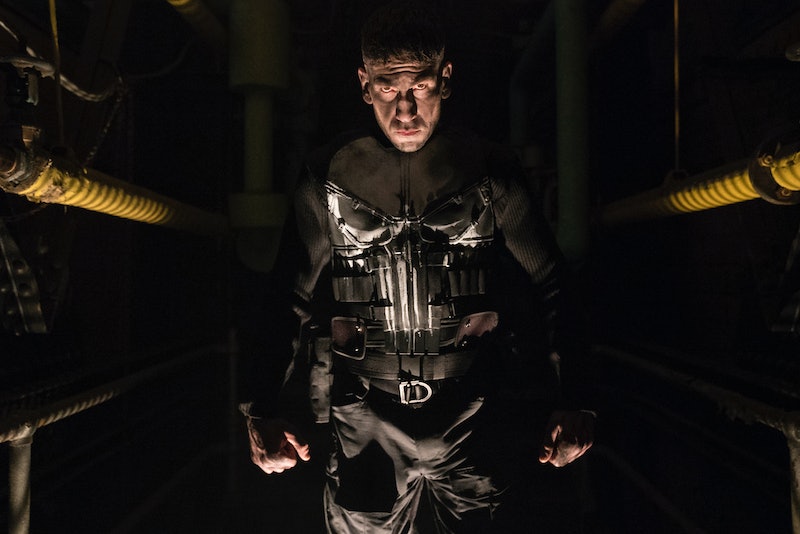 The return of The Punisher means that Netflix's Marvel Universe hasn't flamed out yet. The street level heroes coming back in 2019, Frank Castle and Jessica Jones, may not be the cheeriest, but they get the job done. The new teaser for The Punisher Season 2 marks the return of the vigilante in an appropriately dark way.

At the end of Season 1, Castle was taken into custody and then broken out of jail by friends. He was a man on the run, though still attending veteran groups. In Season 2, Ben Barnes' character Billy may go full supervillain as Jigsaw (no not that Jigsaw), and Karen Page will likely return as well, after her harrowing journey in the most recent season of Daredevil. According to Deadline a new manipulative Punisher antagonist will rise, a character named "Anderson Schultz, an extremely wealthy man who’s grown accustomed to getting his way. His power and legacy are of prime importance, and he’ll implement less-than-legal means to further those ends."

Accompanied by the caption "back to work" in the tweet from the Netflix series' official account, the teaser is simple: A pair of hands, presumably belonging to Frank Castle, puts down a glass, sets fire to a Presidential Pardon, and grabs a set of keys. The burning paper blows away to reveal a pile of ashes in the shape of the skull insignia. Rad. It doesn't reveal a premiere date, but it's still crucial info. Check out the teaser below:

Sure, burn your presidential pardon, Frank. What good's that gonna do? This isn't Jean Valjean's yellow ticket of leave, pardons are actually a good thing to hang on to if you want to lead a normal life after prison.

Later, the official account tweeted this image, giving us a little more information. Is that a home, or a hotel? Is Frank on the run? Where's he going? Out of New York? Where the road takes him, apparently.

Even though it's a new year, as a Marvel fan you may be a little cynical, thinking... does any of this matter? Won't The Punisher be canceled after this season, like Daredevil, Luke Cage, and Iron Fist before it? Maybe, but it doesn't mean that the new season isn't something to look forward to — and there's a new season of Jessica Jones coming later in the year. Perhaps, these two shows will get to end their run with a little more closure than the other three heroes in the Defenders corner of the Marvel Cinematic Universe.

Speaking of the MCU, who signed that Presidential Pardon? Technically, the president of the Marvel world should still be a fictional man named Matthew Ellis. It kind of looks like that pardon was signed by someone whose name starts with a D and ends with a P, and Luke Cage Season 2 referenced Trump and his "Make America Great Again" rhetoric. With Castle's veteran status affecting his daily life, The Punisher is naturally more political than most Marvel shows, so it will be interesting to see how politics come into play in Season 2.

That said — the pardon in the trailer does reveal something very very important that should put Marvel superfans at ease. The pardon is dated January 14, 2017 — well before Infinity War, which decidedly takes place in 2018, despite a confusing continuity error in Spider-Man: Homecoming. Don't worry about Thanos, that all happens in the future, and will likely never affect Marvel Television at all after Avengers Endgame.