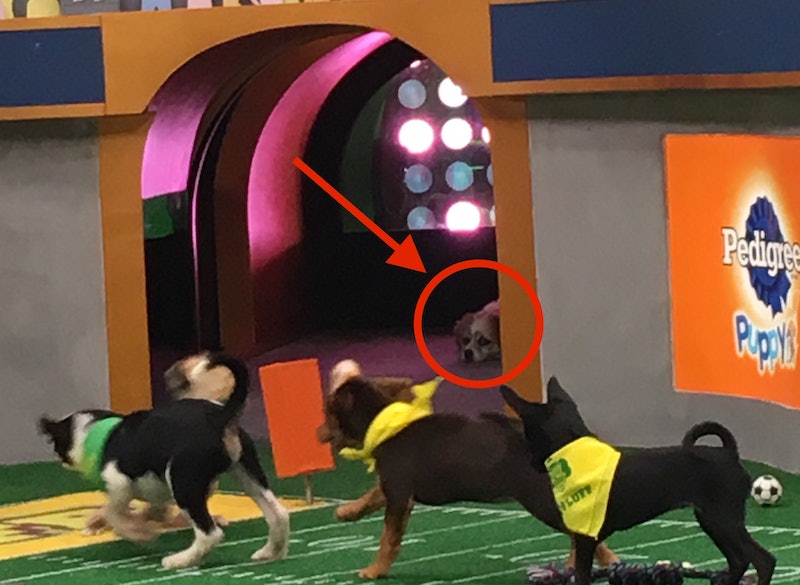 The set of this TV show is so quiet you could hear a pin drop. Cameras circle the stage, producers whisper into headsets, everyone is staring intently at the talent. We're all waiting for the performance of a lifetime, and then the stars arrive — the puppies tumble out of the arched entrance onto the field. There are toys strewn about, a water bowl ready for drinking, and a ref towering above the dogs in a regulation-style striped outfit. The Puppy Bowl is not a joke.

Sure, it's really cute and there are tiny puppies scoring touchdowns and a kitten halftime show and duckling cheerleaders and... oh man, it can bring a smile to your face just thinking about it! But, it's serious business. These puppies are real puppy athletes playing a real puppy sport with real puppy goals and real puppy poop on the field because these puppies play that hard.

The Puppy Bowl is for fun, obviously. And it's really cute, obviously. But it's also shockingly a real game, and it's a real game that films months before it actually airs. This thing is A Production, but the least produced part is the actual game play. When you turn on the Puppy Bowl on Sunday, Feb. 4 at 3 p.m. ET on Animal Planet, you'll be watching dogs actually playing a game. No prodding. No bribes. Just good old fashioned football-adjacent fun organized in a way that works for dogs.

1. It's Not Recorded Live

The actual recording for the Puppy Bowl took place way back on Oct. 17, 2017. What you see on game day isn't happening IRL. But, that's actually better for the dogs, because...

2. They're Usually All Adopted Already

The pups usually find their forever homes by the end of the filming, and adoption is a big part of the point of the Puppy Bowl. A press release for the event states that "Animal Planet worked with 48 different animal shelters and rescue organizations from 25 U.S. states and territories," for a total of 90 adoptable dogs this year — the most in the show's history. So, while you probably can't adopt Boomer or J. Paw anymore, you can still go out there and adopt a rescue dog. All dogs are good dogs, even if they don't all play football on Super Bowl Sunday.

3. There's A Ref & He Really Does Things

The rufferee's name for the Puppy Bowl is Dan Schachner and while he is not an actual ref of human sports (he's an actor), he does really do things during the game, including announcing points scored and calling out when there's an interception.

4. They're Actually Playing A Real Game

We were surprised to see that the producers really just let the dogs play. The dogs just played with the toys until one of them happened to trot down to an end zone and only then was a touchdown called.

5. And On Top Of That, The Dogs Aren't Prodded To Do Anything

If a dog wants to lay down on the field, that's totally fine. If she feels like going off in a corner and playing with a toy alone, no problem. If he prefers to just sit in the tunnel and look really cute, no fouls are called. As stated above, the Puppy Bowl puppies actually play the game, but on top of that, they aren't forced to play if they don't want to. Of course, they are puppies, so a dog that doesn't give a care in the world one second could be riled up and scoring a touchdown the next. The main thing is, it all happens naturally.

6. They Actually Count The Score

When a puppy scores a touchdown, it's recorded immediately by the ref, who will announce something like "Way to go, J. Paw! Seven points!" (Seriously, it was Jennifer Pawrence a lot.) The dog who scores a goal has their goal actually counted. You can see the pride beaming from the puppies' faces. (Or you can imagine that you do because everything at the Puppy Bowl is so great. That works just fine, too.)

7. It's A Loooooong Filming Process

We watched the game for about an hour, which was only a small portion of the actual event, which included multiple puppy swap-outs, a halftime show filmed at a different time, and a trade between the little dogs and the big dogs, because...

8. They Don't All Play At Once

Bringing in 90 dogs means that the play is really split between ruffly 10 dogs at a time. To avoid tiring the pups out, new dogs were brought in every once in awhile, and the bigger dogs weren't paired with the smaller dogs. That's just not fair, you know?

9. There Are No Walls On One Side Of The Field

This part made the least sense to us. Instead of having four walls to keep the curious pups from wandering all over the studio, there were just a team of volunteers sitting on the ground holding up poster boards to keep puppies from falling over the edge. It's probably so the camera could get a level shot without any walls in the way, but, as far as distractions go, some dogs were definitely most interested in the humans behind the poster boards. (Side note: How does one get this job and can we have it?)

While the dogs aren't prodded or forced to actually play with the toys on the field, there are certain toys that seem to make them more active. One toy was referred to as the "secret weapon toy" on set, because for whatever reason the texture or look or smell of it tends to interest the puppies more than the other toys, which means it's more likely they'll walk it into the end zone or try to grab it from a teammate. Apparently, there's one every year.

If a dog's gotta go, a dog's gotta go. A puppy doesn't leave the field or go to a wee-wee pad if he has to... relieve himself. Instead the puppies just poop and someone has to quickly swoop in and pick it up.

It is a film set, after all. But it is very hard to keep quiet when watching a ton of cute puppies running around on the stage. Fortunately, you don't have to stay quiet at all when you watch the dogs play this Sunday. So get ready to cheer for your fave pup as loudly as you want from the comfort of your own home.