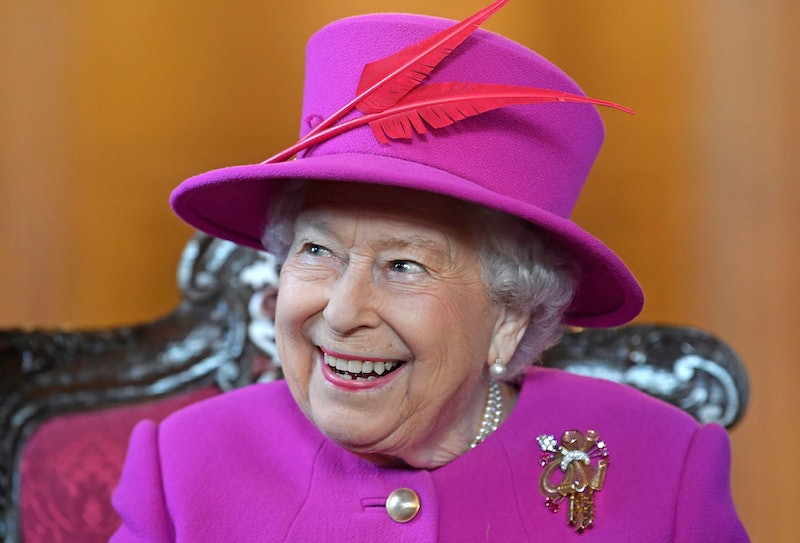 Oh hi Queenie, what's up? Looks like Her Majesty is as frustrated as we all are with this political deadlock. And who could blame her really? Well, while out on a recent royal jaunt, HRH made a few comments that have got people thinking: is she subtly weighing in on the Brexit debate? I mean, she must be pretty concerned with the current state of the country she owns. (Does she own it? I don't understand her job.) Anyway, the Queen has asked for Brits to find a "common ground".

So, the Queen was in Norfolk, celebrating what I suppose is the equivalent of her girl gang: the WI. Yep, the Sandringham WI, or Women's Institute, turned 100 this year, and the Queen popped down for a cuppa and to say "great work, gals!" While there, the Queen spoke about the group's success and their general purpose, and some people have interpreted a few of of her comments to be subtle references to Brexit. According to the BBC, HM said:

"The continued emphasis on patience, friendship, a strong community focus, and considering the needs of others, are as important today as they were when the group was founded all those years ago. Of course, every generation faces fresh challenges and opportunities."

She went on to say:

"As we look for new answers in the modern age, I for one prefer the tried and tested recipes, like speaking well of each other and respecting different points of view; coming together to seek out the common ground; and never losing sight of the bigger picture."

OMG, the Queen giving me serious mediator vibes and I'm so here for it. HM said that WI's approaches were "timeless," and that she "commend[s] them to everyone."

Now, I bet you are thinking, this no big deal, she hasn't really said anything, right? Well, actually, it kind of is a big deal guys. Because the Queen, in her role as monarch, is supposed to remain "strictly neutral" on all political matters, as the Royal website states. And while this incident isn't her calling for an election or anything, BBC royal correspondent Nicholas Witchell has pointed out that it is a veiled political comment if sorts. "It is impossible to imagine that the head of state would use a construction of words such as this without it being appreciated that they would be seen as a reference to the current political debate," he said of the matter. One might say it is the boldest move since she wore that hat after the Brexit referendum.

And it's kind of interesting that the Queen made these comments while at a WI event. I mean, the organisation says of itself:

"The WI is based on the ideals of fellowship, truth, tolerance, and justice. The organisation is non-sectarian and non-party political. WIs are charitable and everything they do must be consistent with that special legal status".

So, I guess the WI and the Queen have a lot in common in that respect. According to its website, the WI was founded back in 1915 in order to give rural communities a real boost and to get women helping to produce food during the First World War. It has grown to be the largest voluntary women's organisation in the UK, with a stonking 220,000 members in 6,300 WIs. So we have some OG feminists on our hands here guys.

Although what the Queen said wasn't that big a deal, hopefully a few people might listen to her message, as it is definitely a meaningful one no matter how your interpret it.